No single-use at this Beacon store; it sells in bulk

There is no magic bullet to reduce the trash produced in the Highlands, but the emergence of bulk-refill stores in the Hudson Valley reflects a wider attempt to pivot from single-use plastic containers and other flotsam of throwaway culture. 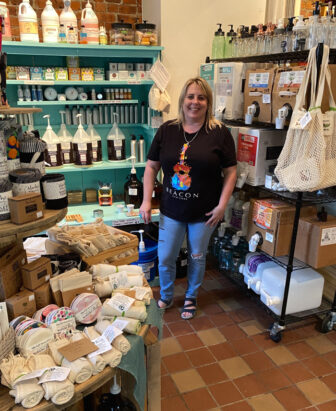 REfill REstore, which started as a pop-up last year, has brought the concept to Beacon. Focusing on everyday household items and pet supplies, it requires customers to bring their own packaging for items such as shampoo, hand soap and dishwashing liquid. Liquids are priced by the ounce. A 5-gallon tub of hair conditioner or cleaning solution removes 40 16-ounce plastic vessels from entering the waste stream, says owner Jodianne Lindh.

At REfill REstore, laundry detergent is available as liquid or powder in bulk, as sheets that dissolve during the wash or as a pack of powder encased by a thin film that also disappear in the machine. Mouthwash and toothpaste come in pellets. Compostable products include cleaning cloths, coffee sold in tea bags and makeup removal pads.

If packages are provided, they are typically made from bamboo, cornstarch or cellulose and are compostable, Lindh says.

Lindh, who co-owns a jerky store, Village Jerk, a few doors down, says she began to research the prevalence of plastic and other substances after she experienced severe reactions to several prescription medications.

It turned out the common denominator were the fillers, such as plastic, wood pulp “and other things that probably shouldn’t be there,” she says. “I began thinking about everything that I’m tossing away and began to change my outlook.”

The Understory Market in Cold Spring, which The Current profiled in October, sells similar low-waste and bulk products. At both stores, most dispensers are cleaned, reused and redistributed by the companies that provide them.

Of course it’s easier to implement conscious consuming in relatively affluent municipalities such as those in the Highlands, notes Sergei Krasnikov, chair of Beacon’s Conservation Advisory Committee, whose family shops at REfill REstore.

The upfront prices for some goods are higher at refill stores, although they typically offer savings in the long run. For instance, a 92-ounce plastic jug of Tide laundry liquid that sells for less than $15 at a chain would cost about twice that at REfill REstore and Understory Market, but the bulk detergent is concentrated and will last longer, says Lindh.

Food Huggers, a reusable pouch made from silicone and touted as a replacement for Tupperware and plastic storage bags, are cheaper over time, and compostable dishtowels made from cellulose and cotton fibers can last for months, lessening the need for sponges and paper towels.

Other products at REfill REstore promote cleaner ingredients and small-scale operations, such as Fat and the Moon deodorant cream. Ecoslay hair products come in plastic containers with a notice that they’re homemade and have never see the inside of a lab, factory or warehouse.

Cute items include Friendsheep dryer balls, a replacement for softening sheets that look like animals, and a sprout pencil. When finished, users plant the stub and up comes a daisy, carnation or spruce tree.

If things go according to plan, bulk-refill stores will open soon in Rhinebeck and New Paltz, said Lindh. She knows because the aspiring proprietors have visited her outlet seeking pointers.

To stay ahead of burgeoning competition, Lindh continues to research the market and guard against “greenwashing,” where companies pose as protectors of the environment but fail to live up to their stated ideals.

For the moment, refill stores are niche, in part because consumers are usually bound by habit. “It would be great if bulk items became widely adopted, but a lot of people are brand loyal or they follow trends and marketing,” says Krasnikov. “People are used to having hundreds of products to choose from.”

“All we can do is make one small shift in each household,” says Lindh. “It won’t reach critical mass in my lifetime, but hopefully it will make a difference for my grandchildren.”

REfill REstore, at 480 Main St., in Beacon, is open from noon to 6 p.m. daily except Tuesday and Wednesday.