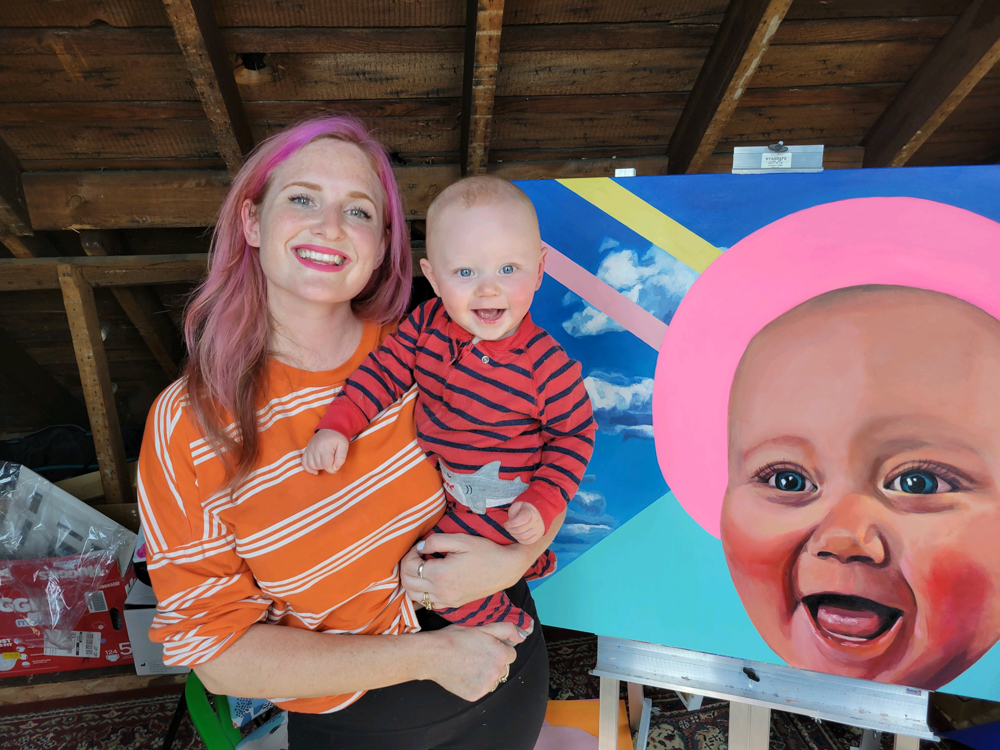 Alyssa Follansbee with her son, Jude, and an art baby (Photos provided)

For some, new motherhood overwhelms art. Not so for Alyssa Follansbee.

“After so many years of saying, ‘I wish I had time to paint,’ the birth of my first child, Sammy, brought art into a laser focus,” says the Beacon resident. “I would paint while he was napping. The newborn stage of working over 24 hours continued; it propelled my art, and kept my body in motion.”

Although she felt qualms about producing “a lot of baby-themed work,” she says she was inspired by being a mom. “I wanted to record things,” she recalls. “You feel trapped by love — and it’s all good. The first thing after my son was born that I made was a painting of me and my son; very straightforward. I love drawing from life, so I painted a scene from my life to get the muscles going.

“For me, becoming a parent was empowering,” she adds. “In the past, I was plagued by self-doubt that I didn’t belong in the art world. Becoming a parent, in charge, capable, made me ask myself, ‘Why couldn’t I pursue my art?’ The next natural step was to paint more and put my work out there more.”

One of the ways Follansbee has done that is by joining the Beacon Artist Union, or BAU. Her first solo show will take place at its gallery on Main Street from July 9 to Aug. 7.

She’ll be sharing a wall of portraits of sleeping children and babies made using the fundamental tools of child art: crayons and construction paper.

Follansbee said she switched from paint to wax following the birth of her second child, Jude, who is now 10 months old. “If I tried to set up an easel, inevitably the baby would wake up and cry,” she says. “I drew my boys while they were sleeping, then drew my friends’ kids. Some of it came from the joke we all had of: ‘Why do we love you more when you’re asleep?’ ”

She says the response to the drawings was overwhelming. “For people with pandemic babies, who couldn’t socialize their children, these quiet portraits meant something. Because they were done with accessible material, they served as an entry point for people in my life who weren’t experienced in art.”

Along with the portraits, Follansbee’s show will include a few paintings and fabric sculptures. One piece “is based on my kid’s soundwave from his laugh,” she says. “I needed to address those great joys of being a parent, and how we measure time, how we balance it. Once you have a kid, your perception changes. When they’re little, it’s so fleeting, and that has driven me to obsessively create work about them. The irony is I have to be apart from them to make the work.”

Follansbee said she didn’t want to be “pigeonholed as a mommy artist,” and asked herself, “Is this just a glorified way of taking pictures of your kids?” But her children are “a massive part of my everyday life, which would naturally filter into my art. That’s my truth. If I tried to downplay, it wouldn’t be authentic.”

Also in her life is the Happy Valley Arcade Bar, which she operates at 296 Main St. with her husband, Johnny Coughlin. It is filled with her bright, bold murals. The renovation and opening of the space was a saga unto itself, as Follonsbee explains.

“When we moved up here I could not find a job,” she recalls. “Right after that my sister had a baby, and her husband was diagnosed with Stage 4 cancer. I nannied for them for a year; he beat the cancer. Then I had Sammy in September 2019.

“During that time Johnny and I decided to open the bar. An arcade bar was his dream. It was a raw garage, with no installations and dirt floors on a grassy lot with a chain link fence. I was very pregnant and scared. ‘Should we be doing this?’ We took some time to think about it, then signed the lease in January 2020, knowing we’d be having a big build-out.

“Then came COVID and, on top of everything, we could legally only have two people working in construction at a time. We finally opened in August 2020. A few weeks later, we got a call that we couldn’t have the arcade games. This was after a health inspector had OKed it, so it was frustrating. Finally, in March 2021, they were allowed. Thankfully, the community here has been phenomenal. They’ve been kind and boosted our spirits throughout.”

Follansbee grew up in Connecticut, the youngest of three daughters. She calls her path to becoming an artist “windy and unusual. I’ve always made art, ever since I was small; I had encouraging parents who recognized my talents, but I didn’t know anyone who was a professional artist. I wound up going to Indiana University, where I knew no one, because it had the highest ‘happiness rating’ in one of those college guides. I loved it.”

She graduated with a bachelor’s degree in studio art and moved to Chicago, where she did office work while making art on the side such as commissioned portraits and murals on abandoned buildings. “I had a lot of kids come by and ask if they could help; I loved getting them involved,” she says. “This convinced me that I should become an art teacher.”

Follansbee earned a master’s degree in art education from Brooklyn College in 2014, then worked as an art teacher in New York City until moving to Beacon in 2020. “We drove up in January,” she says. “We thought, if we love it during the dreary months, we would really love it, and that’s been the case.”

BAU Gallery, at 506 Main St., in Beacon, is open from noon to 6 p.m. on Saturdays and Sundays, or by appointment. See baugallery.org.