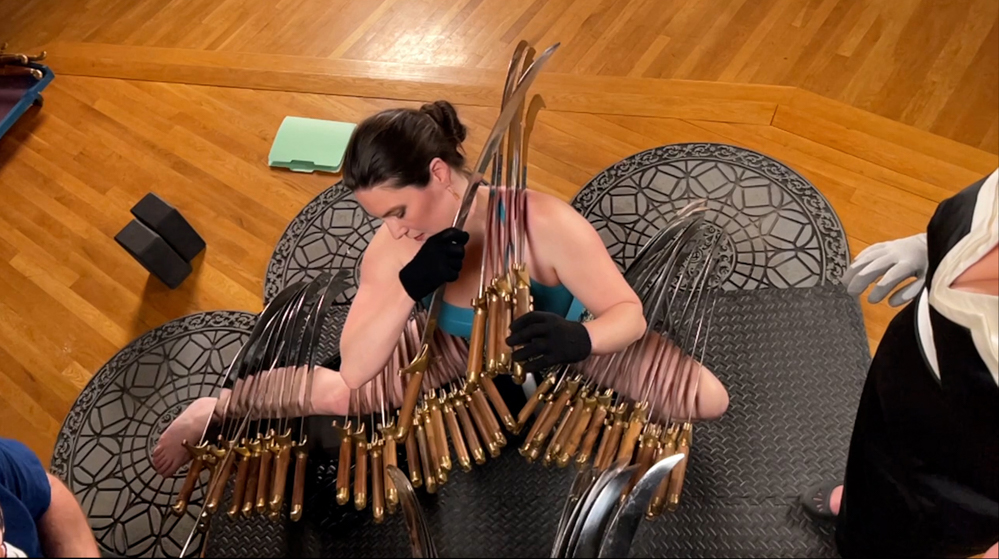 Every one of the more than 53,000 Guinness World Records is unique, and Garrison resident Emily Quant now holds two.

In April, The Current reported on Quant’s plan to establish a record for balancing swords on her body. She suggested two categories to Guinness, which approved them.

On April 30, in Salem, Massachusetts, her pandemic-shutdown training paid off.

First, she balanced 28 prop swords on her body within a minute, more than doubling the minimum of 12 set by Guinness. It took her a year of training to reach the 21-sword mark. (The swords, though dulled, are still sharp enough to cut skin.)

Next, Quant balanced 56 swords on her body within three minutes, or 26 more than Guinness required. She had balanced 50 swords only once during training. “It was validation of the massive time, emotional and financial investment I had made,” she says. “It was such a huge relief.”

“It was incredibly stressful; I was a nervous wreck,” Quant said of her attempts. “I wasn’t sleeping. It took over my life.” 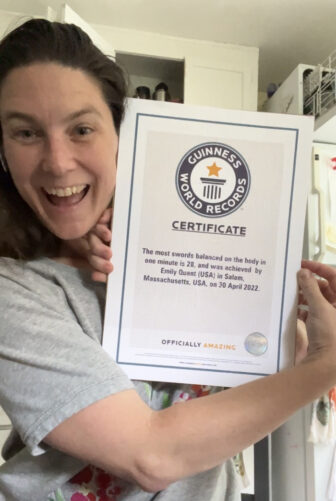 Quant shows off the Guinness certification for her 60-second record. (Photo provided)

When verifying records, Guinness, which first published its famous book in 1955, doesn’t take people at their word. All of Quant’s swords had to fit their specifications, and she had to film each attempt with two cameras — one set at normal speed and the other in slow motion.

She was also required to have two neutral witnesses and two timekeepers who attested to the legitimacy of her record.

She said setting both records brought some healing. “I’ve had experiences where I gave my all to something, only to have it not work out,” she says. “It was like I had this psychological block, that if I put my whole self into something, it’s just going to fail. Now, I know am capable.”

Quant performs mainly in the tri-state area, including recently at Kingdom Faire in Yorktown Heights, the summer “pirate show” that attempted to locate at Graymoor in Garrison. Her acts include everything from fire-spinning and stilt-walking, to harp and voice shows, belly dancing — and now sword balancing.

She is already considering other record attempts, including one that Guinness rejected in her initial proposal: balancing the most swords, with no time limit.

“I’ve also thought about attempting the largest fireball,” she says, although it would require organizing a group of fire spinners, which she compared to herding cats.

She also would like to be recognized in the annual Guinness Book of World Records, which includes only select records. “There are about 10,000 records that are not even [recorded] in the online directory,” she says.

She is already wondering how long it will be before another sword balancer takes a shot at her marks. “I’m nervous about putting my footage online because it will make it a lot easier for somebody to copy my method, which took a long time to develop,” she says. “But that’s all in the sport of it.”