As a general rule, something can’t be both a beginning and a middle at the same time. But the summer solstice ignores this logic, being simultaneously the official first day of summer and the occasion for midsummer — the high point in the year’s rhythm of day and night, the tent pole holding up the brightest point of our hemisphere’s seasons. And among druids, pagans, fairy queens and Scandinavians like my mother, midsummer is an occasion for great joy.

Thanks to my mom, I grew up attuned to the length of days, and I still love regaling people with curious, planetary-shift facts like this one: As of this writing, Beacon has 5 more minutes of daylight than New York City. Cool, right?

Some years ago, my mother told me about something called Midsummer Madness, an affliction that supposedly overtakes Finns every June. They stay awake for days on end, reveling in the 24-hour daylight.

Though we clock in at just over 15 hours between sunrise and sunset here in the Highlands, it’s still an armload of light. So perhaps midsummer madness is what I was suffering from on the eve of the solstice, when I suddenly thought, Why not make summer rolls? Because I’ve never really liked them.

Summer rolls always look so fresh and colorful that I take one whenever they’re offered at parties and other catered events. A moment later, I find myself with a mouthful of fairly bland flavors and discordant textures, wishing I had my own shot glass of dipping sauce to chase it all down. (To be fair, I’m pretty sure I’ve never had an authentic one.)

Whenever I simultaneously want and don’t want to eat something, I skip past the logical dilemma and think: OK, what about it am I craving? With summer rolls, that was easy.

Summer rolls are a Vietnamese dish, traditionally made with shrimp and/or pork, basil, mint, cilantro, lettuce, scallions and rice noodles, all wrapped tightly in rice paper and dipped in a potent sauce, often peanut. Apart from the rice paper (which tastes more like paper than rice) these are all flavors that I love.

So I began researching. Two decades ago, chef Alfred Portale developed an “Americanized” summer roll featuring an emulsified lemongrass dressing folded into the fillings, “eliminating the need for dipping altogether,” as he wrote in Alfred Portale’s 12 Seasons Cookbook. The dressing also helps to moisten the ingredients and marry the flavors. Problem was, his dressing was a lot of work for scant payoff.

Elsewhere, in an online comments section for a summer-roll recipe, several people remarked that rolling up the rice paper was arduous and frustrating. Why not just make a salad? And ta-da, there was the solution to my madness: Everything I love about the summer roll without the problematic parts.

I got to work. Twenty minutes later, my husband, Peter, my son, George, and I were buzzing around the kitchen, messily composing and eating one summer unroll after another. Between mouthfuls, George said, “This is great; you should write about it.” A minute later, as a chunk of avocado fell from his fingers, he added, “But you have to say that standing over the sink is part of it.”

I told him that I would direct any readers intending to make this recipe to seek out less fragile lettuce leaves than ours, which tore apart when we ate them, or to simply toss everything together and eat it as a salad, with forks rather than fingers.

“Or you can just call it an over-the-sink supper,” he said, as he downed his fifth roll.

Sure. Or why not both/and? 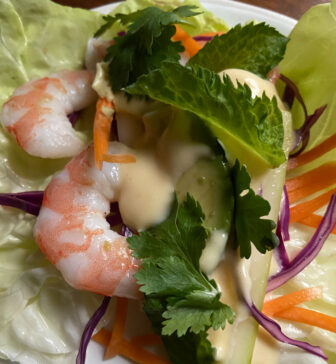 Eat out of hand as (messy) lettuce cups, or serve as a salad.

Place the carrot, cucumber and cabbage in a small dish, and sprinkle with 2 teaspoons lime juice, the sugar and a little salt, and allow to sit a few minutes to lightly pickle.

For lettuce cups, slice the shrimp in half lengthwise. For salad, chop the shrimp or leave it whole.

For lettuce cups, lay the lettuce leaves on a platter. Arrange a few slices shrimp, the pickled vegetables, and 1 to 2 avocado slices on each leaf. Top with the sliced scallions and herbs, then sprinkle with peanuts, if using, plus the remaining lime juice and salt and pepper to taste. Add a dollop of dressing to each and serve, with more dressing on the side.

For salad, lay a bed of lettuce in a broad bowl. Toss the remaining ingredients with the dressing and place on top of the lettuce.

In a small bowl, whisk together all ingredients. Taste and adjust for seasoning.