In a vote taken June 16 at Town Hall, six of the seven board members (one abstained) made a “positive declaration” that the project threatens to come with significant adverse environmental impacts and needs more mitigation.

With the vote, the board concluded its analysis of the project’s Environmental Assessment Form, a document required by New York State, and set the stage for HVSF to prepare a lengthier, more in-depth Environmental Impact Statement.

HVSF, which performed at the Boscobel estate before receiving the donated, 98-acre golf course tract, responded to the board vote by pledging continued cooperation.

The festival wants to turn the site into a permanent home with an outdoor performance tent, actors’ housing; rehearsal and administration buildings; lawn pavilion; visitor center-box office; backstage structure; retention of The Garrison country club’s restaurant and banquet hall; paths; meadows, woods and parkland; vehicle parking; and reconfigured access to Snake Hill Road and Route 9, on the corner of its property.

After pushback from the public, HVSF dropped plans for an inn and indoor theater.

Davis McCallum, the HVSF artistic director, said on Monday (June 20) that, while the festival was disappointed with the vote, “we look forward to continuing the process.” HVSF continues to believe “that the proposed adaptive reuse” of the golf course “will be a great benefit to the Philipstown community, and that the extra due diligence will ensure all parties welcome it as a model of ecological restoration,” he said. 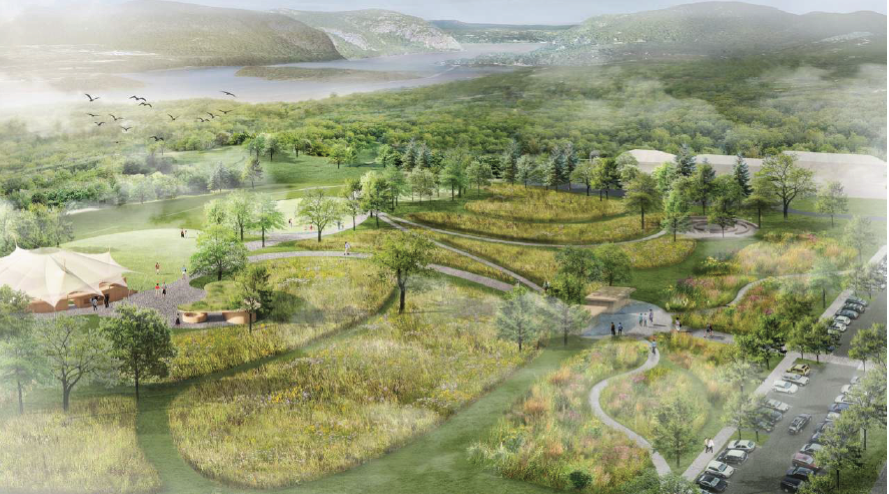 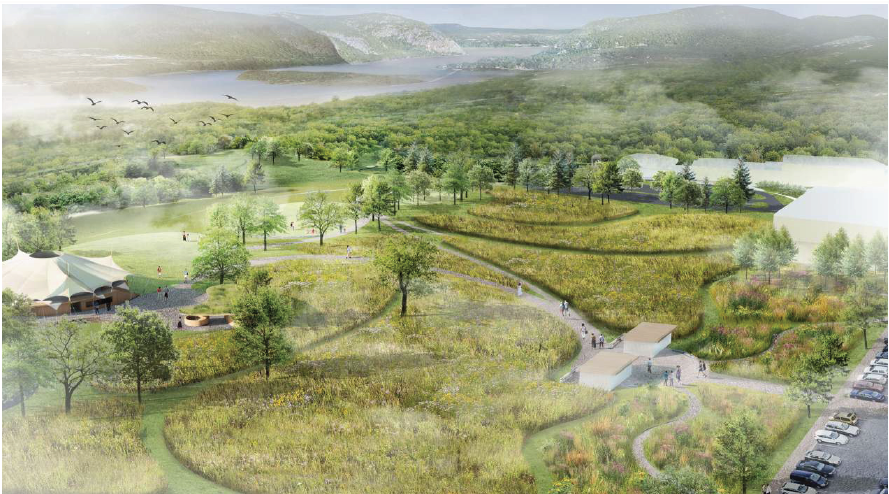 Before and after renderings submitted by HVSF to the Planning Board in April show the removal of a proposed indoor theater and inn, at top right.

In tandem with the HVSF project, the Hudson Highlands Land Trust will receive 74 acres at the site, from the same philanthropist, Chris Davis, who donated land to HVSF.

At the June 16 meeting, Neal Zuckerman, who chairs the Planning Board, repeated his previous assessment that “this is a good project in terms of the social benefit” and “what the Shakespeare Festival does is important for the community and the region.” However, he said, the Planning Board wants to take “a harder look” because “there are several factors that are significant adverse environmental impacts that haven’t been sufficiently mitigated.”

In explaining their votes, Planning Board members repeatedly questioned the project’s effects on water supplies, wildlife and traffic.

“It does concern me that we already have a water problem” in part of Garrison, said Laura O’Connell. HVSF “is going to be tapping into that [supply] significantly. What does that leave? And what does that yield for the future?”

Zuckerman cited data suggesting that the HVSF project would increase water consumption from the present 9,820 gallons per day to 14,814 or even 16,814 gallons.

“Whether 51 percent or 71 percent, it’s a big increase, he said. “The public was vociferous in their concern for water. This is a community that’s deeply embedded in the climate movement. Collectively, I see using increased volumes of water as material and I see a need for greater diligence.”

Heidi Wendel expressed concerns about the project’s implications for wildlife, especially nocturnal creatures not currently subjected to lights, cars, crowds and noise that accompany evening theater. “Obviously, this is an incredible project in terms of the amount of conserved land and the amazing sensitivity to studying it,” she said, while recommending that HVSF go further because the impacts on animals “have not been sufficiently explored.”

HVSF’s plans contains pedestrian paths, but Peter Lewis sought elaboration. “How much of the land are we [the public] really going to be able to get access to?”

Lewis and other board members also questioned the project’s effect on traffic on busy Route 9 and its intersection with Snake Hill Road, seen by many residents as already hazardous, and wondered if backups there would encourage drivers to use narrower, more secluded backroads as alternatives.

Since taking up HVSF’s application in December 2020, along with plowing through documents on environmental issues, the Planning Board has presided over public hearings, held discussions with the applicant and made multiple site visits.