Who gets what in Putnam from pandemic relief, sales tax

A Putnam legislative panel on Tuesday (June 21) approved allocations for sharing the county’s federal pandemic relief funds and sales tax income with towns and villages, including more than $1 million for Philipstown, Cold Spring and Nelsonville.

The Rules Committee vote sent the proposed distribution to the Audit Committee for consideration on Thursday (June 23) and, presumably, to the full Legislature for its July 5 meeting.

A separate plan to spend $14 million on county-level projects chosen by County Executive MaryEllen Odell also passed, despite criticism from some legislators.

Odell announced in March that she planned to allocate $10 million of the county’s American Rescue Plan (ARP) funds and sales-tax revenue to towns and villages on a per-capita basis. The plan includes $739,341 for Philipstown, $203,342 for Cold Spring; and $63,890 for Nelsonville. Philipstown requested $860,000 to overhaul the Garrison Water District but under the pending initiative would receive $120,659 less. 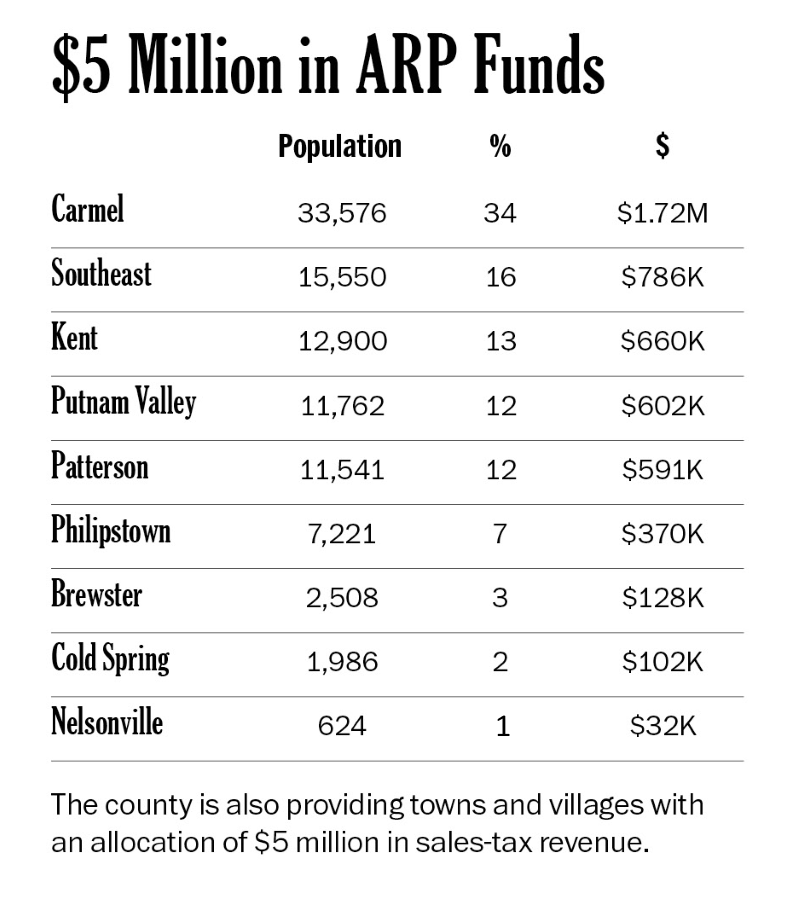 Cold Spring asked for $4.2 million to upgrade the three dams in its reservoir system, two of which date from the early years of the West Point Foundry, established in 1818. (The village acquired them after the foundry closed.) The Odell administration said that the county “recognizes the critical importance of dam remediation,” but called on state and federal authorities to fund the repairs.

Nelsonville initially requested $101,945 for a feasibility study on establishing a sewer system, an HVAC upgrade for Village Hall and fixes to the village-owned Sheriff’s Department substation but later reduced its list. The Rules Committee proposal pledges $31,945 for the study and the same amount for the HVAC system.

During the Rules Committee session, held in Carmel, Mayor Kathleen Foley of Cold Spring urged the county to collaborate with municipalities. She noted that the committee discussed other topics as well on Tuesday but that “none of this matters in Philipstown if the dam breaks.”

Cold Spring’s dams are located in North Highlands, beyond village limits, but a dam disaster would affect far more than the village.

The mayor also said Putnam should hold a public hearing to discuss the county-level ARP projects. 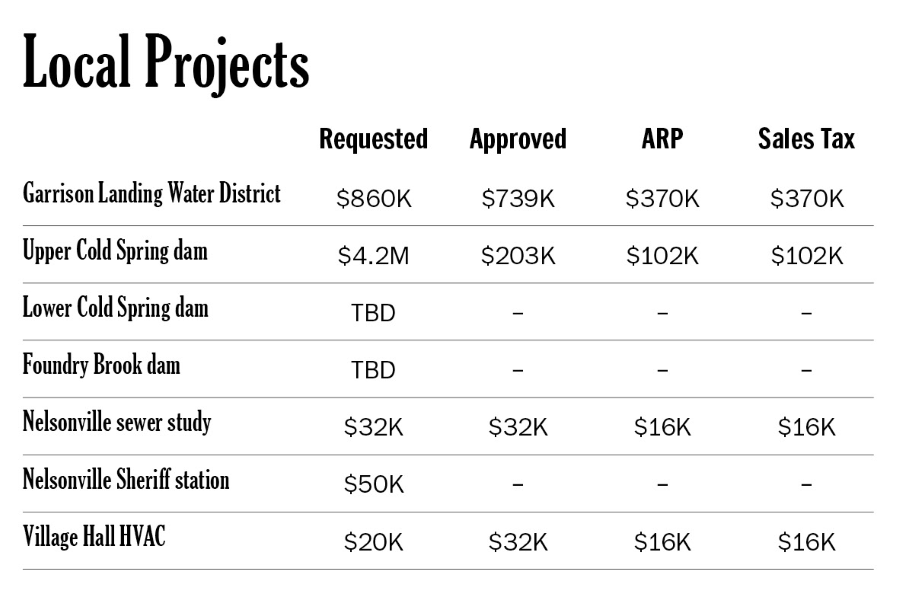 Odell’s proposals include $2 million for a school safety task force; $1.5 million to upgrade software at the Sheriff’s Department; $2.5 million for a police and fire department radio communications system; $2.5 million for a stabilization center for those suffering from addiction and/or mental health crises; $130,000 for a mobile food pantry; and $25,000 for a refrigeration unit for the Second Chance Food Pantry.

Legislator Nancy Montgomery, who represents Philipstown and part of Putnam Valley, observed that the county wants to establish its own mental health program but rejected spending the federal aid on some local agencies that already exist. “We need to understand what we have and what we’re not funding, before we go and fund something else,” she said.

Legislator Paul Jonke of Southeast objected to the short time period given legislators to consider Odell’s initiatives. “This is reckless,” he asserted, noting the lack of public hearings.

Montgomery concurred. “This is the first time we [legislators] have discussed” it, she said. “All my requests to discuss this have been ignored” by county officials except for Finance Commissioner Bill Carlin, whom she credited with being helpful.

“There’s no reason to pass this tonight,” Jonke added.