Dana Levenberg defeated Vanessa Agudelo on Tuesday (June 28) in the Democratic primary for the state Assembly’s 95th District, which includes Philipstown and parts of Westchester County.

Levenberg, the Town of Ossining supervisor who incumbent Sandy Galef endorsed to succeed her for the seat, won 47 percent of the votes cast district-wide, while Agudelo, a former member of the Peekskill Common Council, garnered 33 percent, according to unofficial tallies from the elections boards for Putnam and Westchester counties. 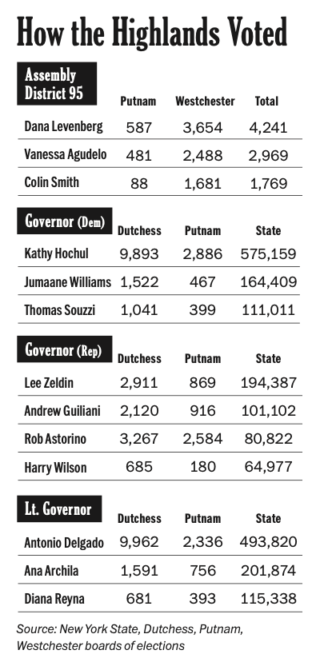 Levenberg will face Agudelo, the Working Families Party candidate, again in the General Election on Nov. 8. Stacy Halper, a retired music teacher from Briarcliff Manor, will also appear on the ballot for the 95th District, as the Republican and Conservative Party candidate.

Whoever wins in November will replace Galef, who held the seat for nearly 30 years before announcing earlier this year that she would not seek re-election.

Lt. Gov. Antonio Delgado, who relinquished a congressional seat in the state’s 19th District when Hochul named him in May as a replacement for Brian Benjamin, also won easily in a Democratic primary, defeating Ana Maria Archila and Diana Reyna. Archila will still appear on the ballot in November, as the Working Families Party candidate.

There was no Republican primary for lieutenant governor. Alison Esposito, a former deputy inspector for the New York City Police Department, is running as the Republican for the seat.