Paul Brady is the owner of Paul Brady Wine at 344 Main St. in Beacon, where he only sells wines, beers and spirits made in New York. 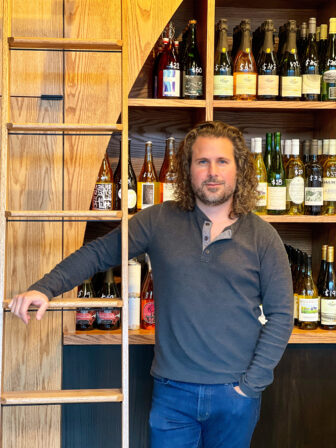 Paul Brady (Photo by B. Cronin)

How’d you get into New York wines?

I come from Michigan, but I spent time in Canada and France with my family. So I was allowed to have a little wine with dinner as a teenager. In Canada, where my family had a cottage, there was this good gastropub, and I got to know the owner. He gave me a glass of this Canadian riesling from the Niagara Peninsula and it blew my mind to learn that it was made so close by. When I moved to New York in 2008, he told me that the Finger Lakes had a similar terroir and style of cold-climate viticulture.

Why has the quality and quantity of New York wines increased so much?

Having Cornell University here helps. They have a big agriculture department doing research on how to grow grapes in this climate. And they have a great breeding department, so they make new grapes. Over the years, we’ve seen prices skyrocket in categories like Bordeaux, pinot noir and chardonnay from Burgundy. That’s how small, remote regions end up getting attention. We turn to them as alternatives to the other regions when we get priced out.

From a viticulture standpoint what are the Hudson Valley’s strengths?

Diversity is a big strength. In the Hudson Valley, you can have wonderful wines made in many different styles all over the region. Look at my shelf: There’s an amazing riesling, there’s an amazing, full-bodied cabernet-based blend very much like a Bordeaux in structure. There’s also interesting, good-value wines made from some of the early hybrid grapes that were planted, like the seyval blanc, at Benmarl [winery in Marlboro]. Then there’s new plantings like the Whitecliff Gamay at the Olana vineyard.

What are you drinking these days?

My two favorite things to drink in New York are sparkling wine and chilled reds. There are certain grapes here that lend themselves to sparkling wine production, as well as red wines that are good with a chill. Almost all the red wines that get produced in New York have this beautiful acidity that makes chilling it desirable. Tannins can become a little — I don’t want to say unpleasant, but can stick out if the bottle is too cold. Cellar temperature of 55 to 57 degrees is the best. But certain cabernet francs and pinot noir, I’m literally just drinking it ice cold and loving it.