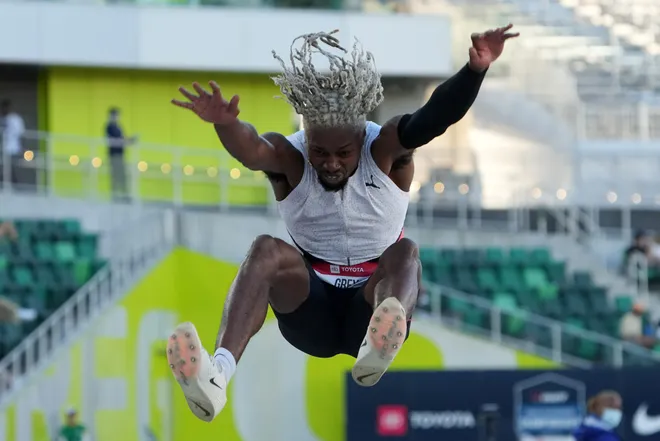 When Rayvon Grey sets his sights on a goal, he finds a way to realize it.

Grey was an indoor and outdoor national long jump champion as a senior at Beacon High School in 2016 and an NCAA champion in 2019, but the LSU grad reached new heights on June 24 in Oregon, winning a national title at the USA Track & Field Outdoor Championships at Hayward Field in Eugene.

And he did it in dramatic fashion.

After his first two jumps, Grey sat in ninth place with just one attempt left. Competitors needed an eighth-place or better finish to advance to the finals.

On his third attempt Grey got a strong takeoff, and soared 8.19m (26-101/2), and into first place in the competition. The jump was a new personal best for Grey, and the best jump in the competition by more than an inch.

Grey now heads to the World Athletics Championships on July 15, also in Oregon. 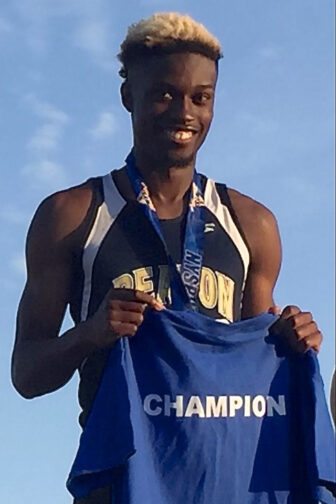 Rayvon Grey on the podium at the state championships for Beacon in 2016. (Photo courtesy of Jim Henry)

“That’s a huge accomplishment, and elevates him to the next level,” said Jim Henry, Grey’s former coach at Beacon High School. “Winning an NCAA championship put him at the top of the college ranks, and now to win a national title — with pros, Olympians, everyone — to win that stamps him as one of the top professional jumpers in the country.”

A 2019 NCAA champion in the long jump, and a 2021 LSU grad, Grey has talked about reaching 27 feet. Henry believes that he is “still a work in progress” and can do even better.

Grey fell short of qualifying for last summer’s Olympics, finishing 13th in a qualifier, and used the experience as motivation to raise his game.

Henry has not been surprised by Grey’s ascent, and said a number of Beacon track and field fans have been tuned in to his accomplishments.

“It’s a lot of fun to watch the success he’s had,” he said. “It gives me flashbacks to his success in high school. I’ve gotten a lot of calls and texts from others, congratulating him.”

Beacon athletes are also tuned in, said Henry. “A few even came out for the team just because of Rayvon,” he said. “It’s exciting to see he’s energizing kids; he’s fueling their dreams a little bit.”