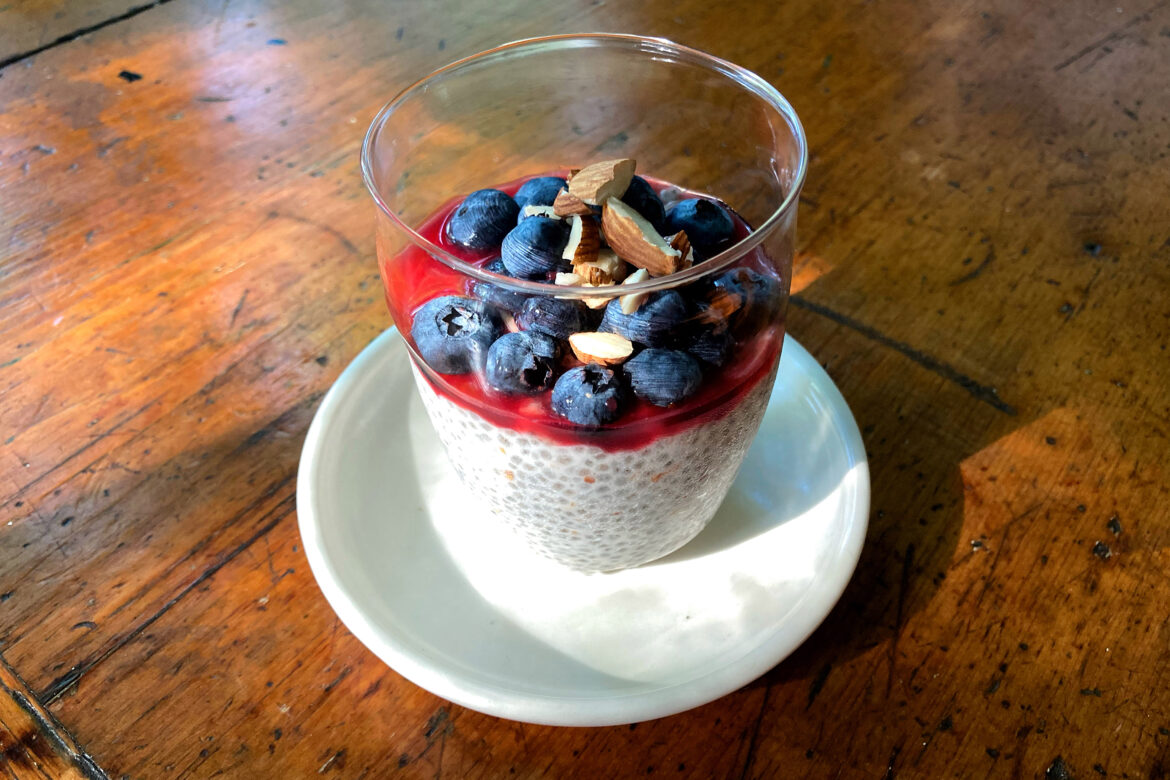 Chia seeds. It’s hard not to think of them without picturing terracotta figurines of cute little animals or cultural celebs (the Bobs — Ross and Marley; Jerry Garcia, Barack Obama, Donald Trump) sprouting tufts of cutely incongruous green “fur.” They’re right up there with the Pet Rock as a pre-internet cultural meme and questionable marketing success.

To paraphrase H.L. Mencken, no one in this world has ever lost money by underestimating the intelligence of the great masses. But this column is generally not about bad taste. It’s about GOOD taste. But chia seeds?

Chia seeds are (unsurprisingly) the seeds of Salvia hispanica, a flowering plant in the mint family native to Mexico and parts of South America. It was cultivated as both food and medicine for over 4,000 years and was, along with corn and beans, primary to the cultural nutrition of Mesoamerica, until Spanish domination virtually wiped it out in a couple of centuries.

In the latter half of the 20th century, chia’s exceptional nutritional content and importance was revealed. The word “superfood” gets thrown around freely, but chia most definitely warrants the appellation. Just 1 ounce of chia seeds contains 11 grams of fiber, 4 grams of protein, impressive amounts of omega-3 fatty acids and a laundry list of essential vitamins and minerals, all for 140 calories.

Kind of nutty in taste, they’re a great extra-nutritive raw addition to baked goods, smoothies, nut butters, jams and cooked grains (especially quinoa). Chia seeds do have one distinctive feature: They are hydrophilic (water-lovers), that is, they absorb as much as 12 times their weight in liquid when soaked.

Additionally, when soaked, they swell and develop a gelatinous coating and texture, similar to tapioca (with which they play very well), which means they also soak up the flavors of whatever they are immersed in. This makes them a great addition to bean or vegetable salads to add a bit of extra protein (be sure to add extra dressing), but the most common usage is in the infinite recipes for chia seed puddings, parfaits and mousses that litter the web.

Which brings us to the proffered recipe. Almond and coconut milks provide the liquid and non-dairy creaminess. I’ve used honey here to avoid cane sugar, which adds its own flavor. It’s a great alternative to breakfast or snack yogurts. You could, of course, use other sweeteners or flavoring agents (vanilla here); just be mindful of the seed-to-liquid ratio. Almond milk and boiled cider with raisins and walnuts?  Coconut milk with ginger lime and mango? Why not.

Regardless, it’s amazingly quick and easy to whip up, keeps for days and offers guilt-free comfort, satisfaction and sustenance. I’ve topped it here with blueberries and a quick raspberry compote (shooting for a discreet Fourth of July theme), but as we enter high summer any number of fresh fruit combinations will no doubt suggest other formulas.

1. Use a whisk to combine almond and coconut milk, honey and a pinch of salt in a large bowl (to hold a quart, plus). Slowly sprinkle and whisk in chia seeds (following the same procedure with the kasha, if using), ensuring that the seeds (and kasha) are evenly hydrated.

2. Allow to rest, refrigerated, at least 20 minutes or until pudding has a rich, creamy texture. (I prefer to do this and let it sit refrigerated overnight, covered.) Pudding will keep for up to 3 days but may need thinning with more almond or coconut milk as the seeds continue to absorb liquid.

3. Top with your favorite fresh fruit or compote, granola, nuts or flaked coconut. The photo shows blueberries, almonds and a quick raspberry-orange coulis.

Combine all ingredients in a small saucepan. Bring to a steady simmer and boil for 10 minutes, stirring to ensure sugar is dissolved. Remove from heat and allow to cool, removing orange zest strips. When cooked, roughly mash any large fruit and strain through a few layers of cheesecloth, squeezing the last of the pulp through and hopefully avoiding the seeds. Chill. Will keep for a week, covered and refrigerated.