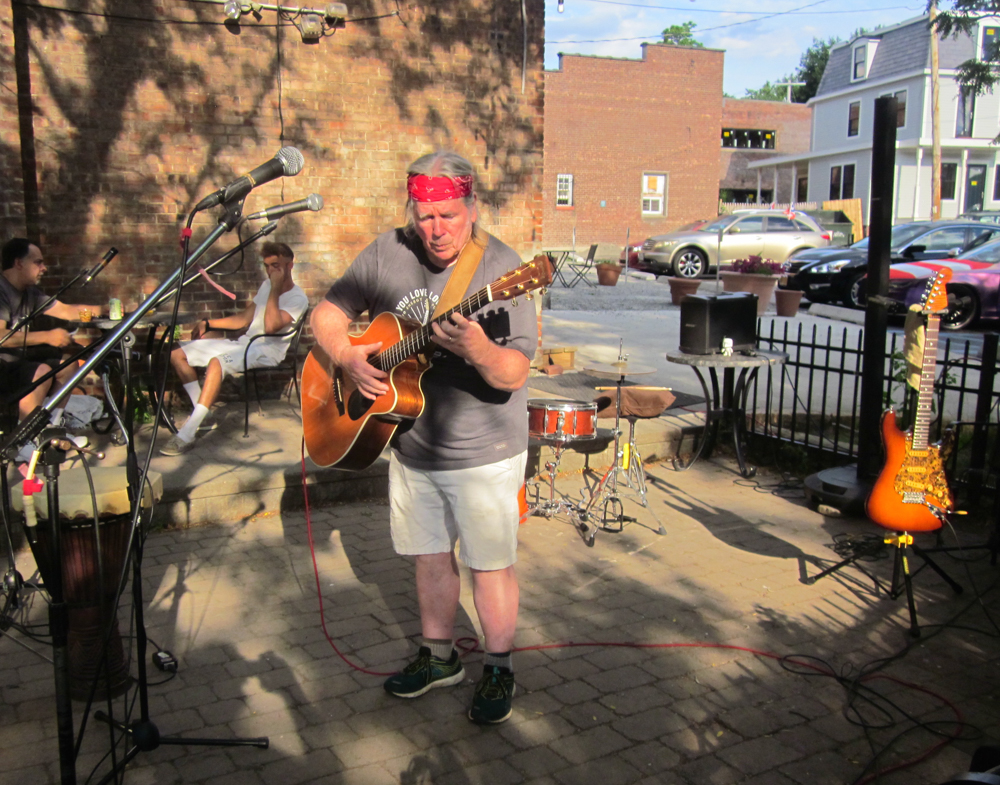 Thom Joyce performs at the Bank Square Coffeehouse, where he hosts an open mic on Wednesdays.

A guide to local open mics

If successful open mic nights rely on congenial hosts who keep things moving and foster a welcoming environment for both beginners and polished performers, then local venues are in good hands. Open jams offer local artists valuable experience playing in an ensemble and provide low-pressure opportunities to meet other musicians and sample the local talent.

Sign up at 6:30. Started by Steve Middlestadt a year ago, this showcase is now hosted by the folks at Jake’s Main Street Music, David and Jake Bernz, who hosted song circles until COVID arrived. At Beacon Bread, players get two songs or 10 minutes, but if there’s time left the Bernzes hold a lightning round where participants can play a bonus tune. Sometimes performers like to sign up early, play and leave, said David Bernz, but “musicians in Beacon support each other and most people at the open mic stay the whole evening.” For now, this event is outdoors only, so call ahead if the weather is bad. “It’s like an oasis back there,” said David Bernz. “You can’t hear the cars.”

Sign up at 5:30. A Thom Joyce production, this replicates the welcoming, laid-back vibe of a second open mic he hosts at the Howland Cultural Center, and features a similar abundance of instruments and sound gear. The cafe keeps a playable house guitar in the lounge area, so music is a natural here. Evenings can be idyllic when Joyce sets up on the ample patio.

Sign up from 5 to 6:30 p.m. Vigilant host Steve Kirkman strikes the right balance, keeping the show moving while ensuring that musicians have what they need. After he plays a tune or two to set the mood, Kirkman draws, at random, the names of the first 16 people who signed up and calls them onstage to perform two songs.

The chance to hold court on Towne Crier’s Salon Stage, where name acts have appeared, is a plus, as is the sound system. Musicians can hear every lyric and note — for better or worse — from a floor speaker that faces them. An electronic piano provides an alternative to the parade of guitars, and Kirkman fixes inaudible instruments, mixer issues and other technical problems. Forgetting words or stopping midway through a song is OK. The crowd hoots and hollers anyway.

The spirits of Woody Guthrie and Pete Seeger live on at this communal gathering, which began in the 1970s and is held after the nonprofit’s business meeting and potluck dinner. Everyone gets to lead at least one song, depending on how many people attend, and musicians play along whenever the feeling hits. In addition to guitars, accompaniment might include fiddle, banjo, mandolin, ukulele, hand drum and backing vocals. During a recent jam, 10 musicians took turns swiveling the microphone around the circle’s center, playing through the night.

Howland Center, Lit Lit, first Fridays, 7 p.m.
Almost every seat is filled for this literary open mic at Howland, a former library where a few hundred books cram several shelves in the second-story gallery. Host and accomplished author Donna Minkowitz often recruits featured readers, who get around 15 minutes to start things off. Others have five minutes, but no one’s timing. Themes lean toward memoir and personal stories, but performers also read fiction, poetry, music lyrics and other literary styles. Beer, wine and snacks enhance the salon ambiance. Sign-up options at donnaminkowitz.com/lit-lit.

Howland Center, fourth Fridays, 8 p.m.
Sign up at 7:30 p.m. Donation requested, $3 to $5. Local fixture Thom Joyce lays out a rug from his home and lugs in enough gear to outfit a small indie band. Another amenity is the Steinway grand piano.

Joyce, the hospitable host of this event for the past 25 years, buzzes back and forth between the stage and the mixer like a hummingbird. Proud of his players, he praised a guitarist who picked up the instrument not long ago. “He’s really come a long way,” said Joyce. “It’s so great to see.” He also happily records videos for the musicians, bakes brownies, delights in delivering rousing introductions and encourages visitors to use his guitar — unless the person is intoxicated. Attend before his tenure ends: Starting in 2023, a new host will preside over this longstanding soiree.

During warm months, the music spills into the streets at Main Street and Morris Avenue (Route 9D), Cold Spring’s crossroad. Regulars include fiddlers, who drive the melody, and guitar players providing support. The repertoire sticks to traditional instrumental fare (sans solos), including well-established jigs, reels and hornpipes. A cheat sheet with song names and starting notes keeps players on point. This music requires feeling, and sipping a well-poured Guinness during breaks can help participants get into the groove.