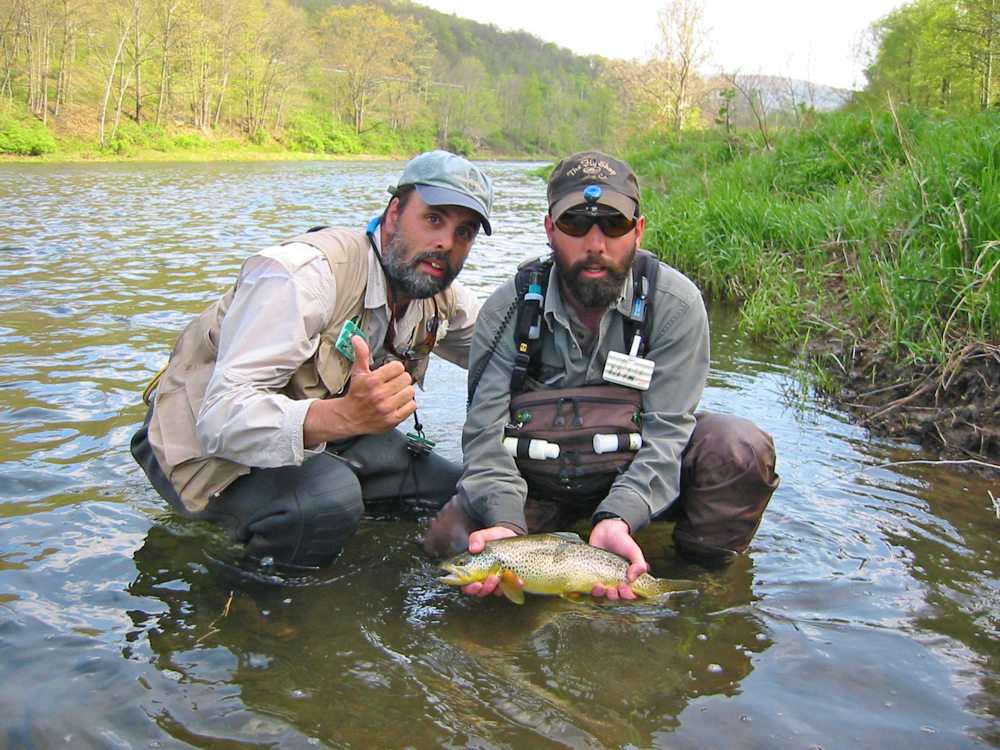 In this photo from 2004, Joe Rist (left) and John Bocchino fish in the West Branch of the Delaware River in the Catskills. (Photo provided)

When John Bocchino received a President’s Achievement Award from his employer in 1996, he also won a $1,000 check for his outstanding work on a telecommunications project in Hong Kong.

At the time, the 1976 Haldane graduate did not know that the prize would trigger a fly-fishing odyssey that would change three lives: his and those of two former schoolmates, Joe Rist and Jim Corless, who were then working as mail carriers in Putnam and northern Westchester counties.

Today Bocchino, 63, is a fly-fishing outfitter and guide in Almont, Colorado, where he plans and leads fishing trips around the world. He is planning a trip next winter to New Zealand, where he and eight clients will helicopter out every day to remote trout streams on the South Island.

Meanwhile, Rist, 64, owns Trout Town Flies in Roscoe and operates the shop with their buddy, Corless, 63. Rist, who also graduated in 1976 from Haldane, bought the shop in March of 2020, just as the pandemic hit. “As bad as COVID was, it worked out great because everyone was going outdoors,” he said.

In addition, the three lifelong friends have been gathering, for 25 years, in the spring and fall for Fish Camp, where they indulge in fishing, food and friendship.

“It’s been a journey,” said Bocchino. “It’s amazing to look back and see where we are now.”

All three grew up around Cold Spring and Garrison, plunking worms in Foundry Brook, Clove Creek, Indian Brook, Wappingers Creek and other local streams.  But they hadn’t tried fly-fishing, which was considered esoteric and even a bit odd.

Rist, whose grandfather was a commercial fisherman on the Hudson River, remembers asking his father about men he once saw standing in a river wearing waders. “That’s called fly-fishing,” his dad told him. “It’s hard. It’s a different kind of fishing and you may not like it.”

As an adult, Bocchino had actually tried fly-fishing once or twice while working in California. He was intrigued. So, when he received that $1,000 check, Bocchino drove to an Orvis store in Tysons Corner, Virginia, near his home at the time. He bought a rod, a reel, waders, a fishing vest and some flies.

“I gave them all the money and told them to give me everything I need,” he said. “I already had a hat.

Then Bocchino called his Haldane buddies back in Cold Spring. His plan was to drive to Roscoe, in the Catskills, six hours from Northern Virginia, stay at the Roscoe Motel for $50 a night, fish the nearby Beaverkill River and figure out how to catch trout using a fly rod and tiny hooks wrapped with feathers and thread.

Roscoe, a hamlet in Sullivan County that dubs itself Trout Town USA because of its proximity to some of the best fly-fishing rivers on the East Coast, became the perfect meeting place. For Corless and Rist, it was just a 90-minute drive from the Hudson Valley.

But the Cold Spring contingent didn’t scare many trout on that first trip. Bocchino recalled that Corless, wearing ill-fitting waders, fell into Hendrickson’s Pool, one of the legendary fishing holes on the Beaverkill.

“We were clueless,” he said.

But that trip in 1997 was the beginning of the annual pilgrimages they christened Fish Camp.  In the fall and the spring, the Haldane friends — “Bo,” “Risty” and “Jimmer” (as Corless is known) — gather to fish the Beaverkill, Willowemoc Creek and the West Branch of the Delaware River.

Bocchino became the camp’s unofficial director. Sometimes, others from Cold Spring would join them for a day or more, including Phil “Hector” Shea, Vinnie Cimino and Dick Kiefer, who had been their baseball coach and biology teacher at Haldane.

“We really started learning as much as we could,” said Bocchino. The trio studied rivers and trout feeding patterns. They read about fly hatches and the entomology of mayflies, caddis flies and other insects that comprise the trout diet.

One evening, Corless recalled, they were staying at a cabin in Deposit, near the West Branch of the Delaware River, when Bocchino summoned everyone outside. “It’s time for class,” he declared.  The task of the evening, besides drinking Heineken and Yuengling, was to identify the different varieties of mayflies caught in the spider web on the cabin’s back deck.

“I was so passionate about fishing,” recalls Bocchino.  “I knew I wanted to make a change and do it as my second career.” 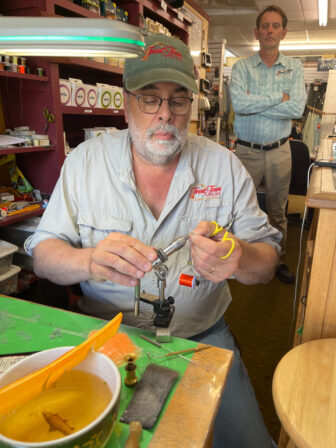 So, he did. In 2006, Bocchino tried to buy Beaverkill Angler, a fly shop in Roscoe. But there were multiple offers and the owner said he would sell to “whoever gets here with the money first.” As fate would have it, just as he was driving up to inspect the shop and close the deal, Bocchino’s wife was in a car accident and he had to turn around. Another fisherman beat him to Roscoe with a check.

So Bocchino executed Plan B. He took a job with Willowfly Anglers in Almont, running the shop and guide service. He later started his own guide service, Riffle and Rise, and hooked up with Eleven Experience, an ultra-high-end travel company that creates unique outdoor adventures. In addition to guiding, he planned fishing trips to Chile, New Zealand, the Bahamas and Iceland.

Meanwhile, Rist started applying what he learned at Fish Camp. He joined Trout Unlimited, a conservation organization, and eventually became president of the Mid-Hudson chapter. He started his own part-time guide service, with a website called troutwhisperers.com.

Ten years ago, Rist retired from the post office and became head guide at the Catskills Fly Shop in Roscoe. When the shop’s owner, Dennis Skarka, died in 2019, Rist purchased the shop from Skarka’s widow and changed the name to Trout Town Flies.

The pandemic began the month the deal closed, and for Rist there was a moment of panic. “Did I just blow my retirement?” he wondered.

But his worries didn’t last. Fly-fishing turned out to be the ultimate social-distancing activity for New York City residents, said Rist, who now lives part-time in Poughkeepsie and part-time in a trailer at the Butternut Grove campsite in Roscoe.

During the pandemic shutdown, he provided curbside service, putting a mat outside so customers could try on boots and waders.

When Rist bought the shop, it had four fishing guides. Today, there are 10. With business growing, he recently brought on Corless, who also retired from the post office and moved to Liberty, just down Old Route 17 from Roscoe.

Fly-fishing has hooked its ultimate catch: the three classmates from Haldane.

“Year after year now, we don’t know how much time we have left,” said Bocchino. “So, I’m going to try my damndest to get back there for Fish Camp.”

One thought on “Fish Camp”