No matter how many advanced degrees you have, or years of experience in any given field, if you’re working in a transactional way, what’s most critical is that you listen to the client.

“Much of what I need in order to create the perfect result comes from what I learn through open communication and a real back-and-forth with the intended user of any project.”

So says Andrew Kepler, who, after decades of serving high-end clients in New York City, has opened Hudson Highlands Home at 35 Chestnut St., in the space set back from the former home of Grey Printing. The firm provides interior design, renovation and restoration services. 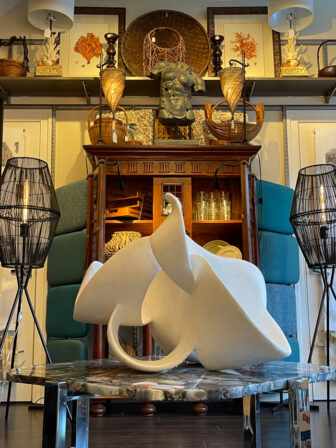 Navigating Kepler’s showroom, chock-a-block with vintage wares and designs, means weaving through tables and stands laden with home accessories, such as lighting fixtures, colorful decorative items, mirrors, barware and other objects, many found at estate sales, auctions, eBay and elsewhere online. None of them are “heavy and serious,” Kepler promises, just “fun vintage” at a reasonable cost.

His services combine interior design and architecture, two fields which he feels don’t need to be separated.  (As a non-licensed architect, Kepler cannot design buildings.) His goal is to run a design practice that merges high-end aesthetics “with a deep understanding of the requirements and practicality of real-world lifestyle” to create “joyful and easygoing spaces” financially accessible to a broad audience.

“I’m not after the high-end anymore,” he says. “Now I want to be a transformative designer … applying high-end design principles to most people’s reach.” 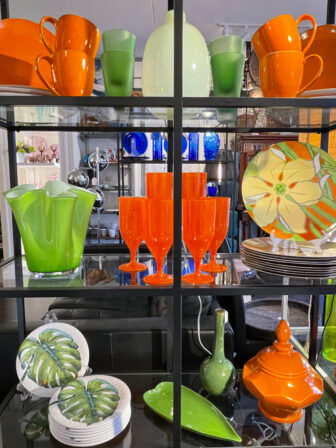 He may have worked for toney firms in Manhattan, but Kepler’s roots are more humble. He grew up in the small town of Scottsbluff, Nebraska, whose population then was 8,000-something, he says. Kepler believes he always saw spatially and had an affinity for how things are put together. As a kid he was fixated on “changing things around.” That trait “drove my parents crazy,” he says.

He also had his eye on New York City from the start. “My mom said: ‘You walked across the [high school] graduation stage and you went directly out to the airport,’” he says.

After graduating with a bachelor’s in art history from Hunter College, where he took an architecture class as a junior, Kepler eventually earned a master’s in architecture from the University of Maryland.

He worked for a high-end design firm for 15 years, before going out on his own for another 15. During those three decades, he developed a network of craftspeople. But after decades in Manhattan, he wanted a change and looked toward Cold Spring, where for 25 years he biked, hiked and shopped for antiques during visits to friends in the area. One day he saw a “for rent” sign at 24 Main St., a house he had always admired.

“I fell in love with the house — it’s so pretty — and rented it,” says Kepler. 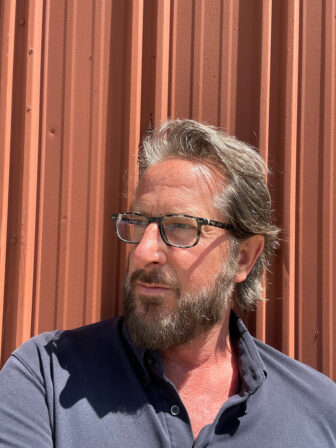 Eventually, he began spending longer weekends in Cold Spring and fielding client calls from the village. Before long, he and his husband decided to buy a house in Philipstown and Kepler became his own interior-design client. Now he wants to build the same kind of network of craftspeople he had in New York City and transition from clients there to ones in the Hudson Valley.

With that in mind, he rented the space on Chestnut Street to introduce himself to potential clients and to offer a fun retail space, filled with the many objects and accessories he has amassed through years of buying. With plenty of space for an office, his library and samples, Kepler renovated the building’s large front room, turning it into a showroom accessible to all, price-wise.

“It should not be scary for people. It’s fun,” he says. “I want to be approachable: Stop in and buy some kooky stuff.”