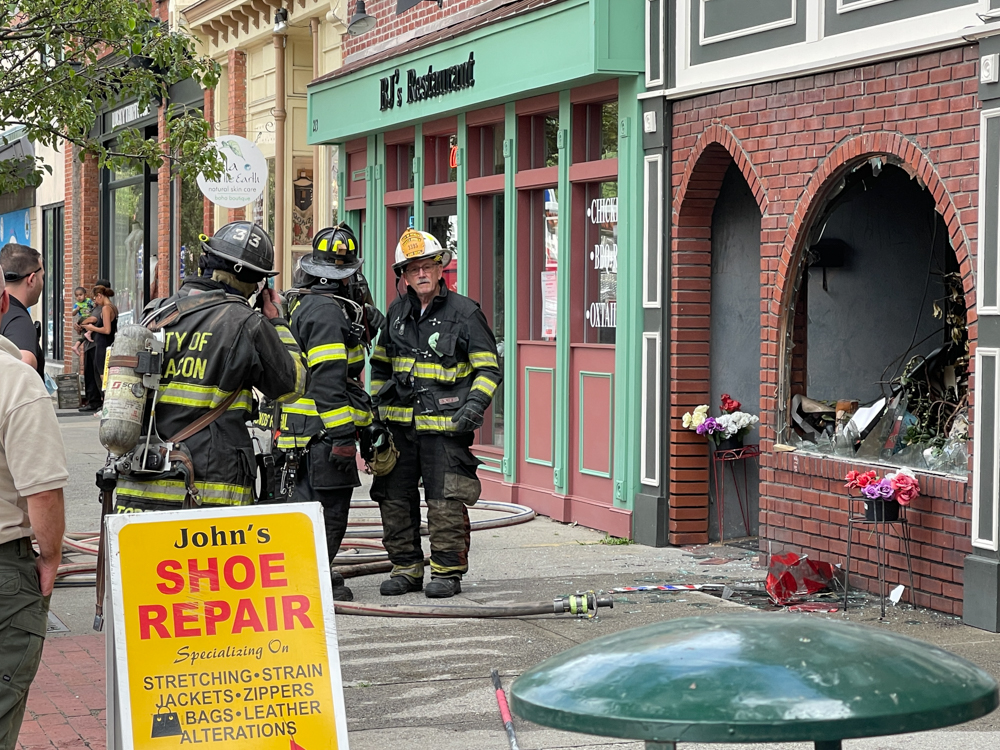 A fire on Wednesday caused heavy damage to Alvin Bell’s barbershop on Main Street in Beacon. (Photo by Daniel Aubry)

There were the pictures with his wife and other family members, old birthday cards and a faded newspaper clipping with an array of pictures under the bolded heading, “Black American Generals and Admirals.”

Alvin Bell turned the walls of his barbershop at 209 Main St. in Beacon into a repository for his history and the city’s.

“I had so much history in this place, it’s crazy,” he said on Thursday (July 7). A photo provided by the Beacon Fire Department shows the wreckage inside Bell’s barbershop.

Not much of that history was left after Wednesday, when an afternoon fire caused heavy damage to the interior of the shop Bell had occupied for more than 30 years. Bell said he worked until 3 p.m. and the woman who braids hair in the space locked up around 4 p.m. A half-hour later, he said, someone told him that a fire had broken out.

“We don’t know what happened,” he said.

Chief Gary Van Voorhis said that Beacon firefighters were on the scene within 60 seconds of the 4:04 p.m. alarm, and remained at Bell’s barbershop for more than three hours.

Fighting heavy smoke, firefighters found the blaze in the rear portion of the barbershop and were able to confine it to the first floor of the building. There were no injuries to firefighters or the tenants living above the barbershop, Van Voorhis said.

The shoe repair shop next door sustained minimal smoke damage. The cause of the fire is under investigation but appeared to be accidental, the chief said. This picture showing Bell with Pete Seeger and an unidentifed man was among the memorabilia hanging on the wall of his barbershop in Beacon. (Photo by L. Sparks)

Bell said he was able to rescue a pair of old boxing gloves and an old briefcase. Most worrying, he said, is the fate of a newspaper clipping of a photograph of him with Pete Seeger, the legendary folk singer who often stopped at the shop for haircuts or long conversations. Seeger, who autographed the clipping, also invited him to sing at events, said Bell.

As of Thursday afternoon, Bell was waiting for clearance to sift through the remains for salvageable items. His vigil was constantly broken by well-wishers who included local residents and the chiefs of Beacon’s fire and police departments.

A GoFundMe page has been created at bit.ly/alvin-bell to help Bell replace his equipment and reopen. A similar campaign to assist Amy’s African Hair Braiding, which operated from the shop, is located at bit.ly/amy-braiding.

One thought on “Longtime Beacon Barber Loses Shop To Fire”