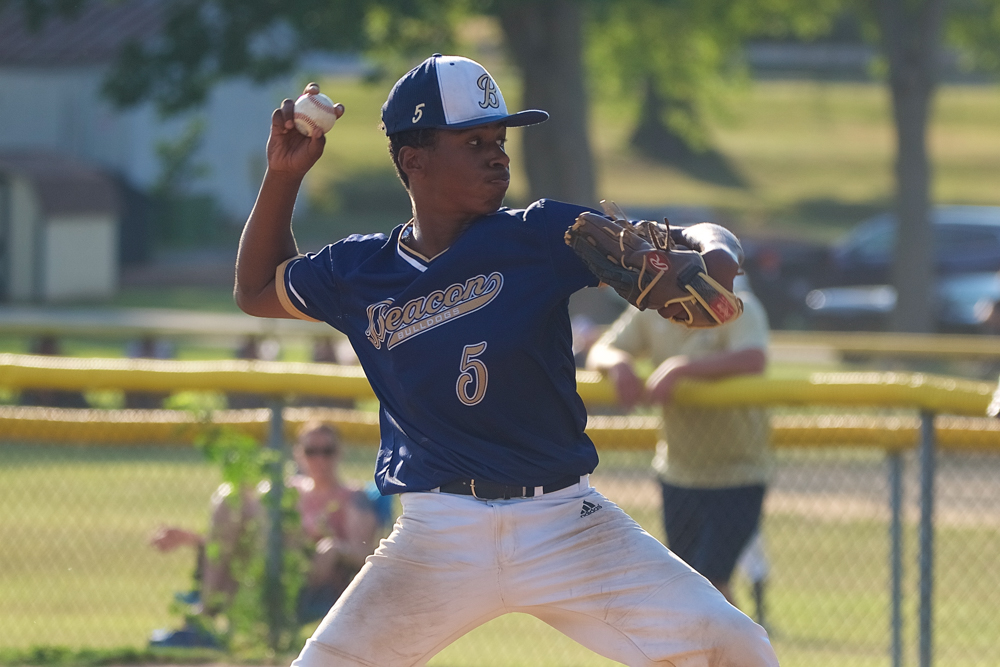 Elijah Epps didn’t allow a hit while pitching for the 12U team on Wednesday July 13. (Photos by S. Pearlman)

Beacon’s travel team for players ages 9 and younger won both ends of a twin bill against the Rosendale Blackhawks on Sunday (July 10), 10-8 and 14-4, in a Greater Hudson Valley Baseball League matchup.

AJ Constantino got the win in the first game, fanning six in four innings. Jack Giametta and Evan Eraca each drove in three runs, while Constantino went 2-for-3, and Grady Barton, Hudson Faust and Henry Alee each had an RBI.

In the second game, Giametta (4-for-4) and Will Varricchio (2-for-4) each drove in three runs. Barton had two RBI, Easton White went 4-for-4 and Max Digneo and Eraca each had an RBI. 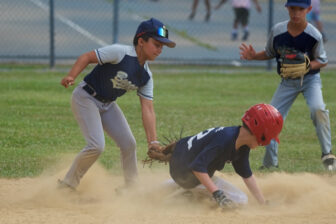 Shortstop Gavin Justice tags a runner out at second on Wednesday; the 11U team earned its first win of the summer.

“Our defense showed up and did a nice job,” said Coach Jed Varricchio, noting that his team pulled off a triple play. “Our pitchers did a great job, as well. Barton, White and Constantino all stepped up.”

After losing the first two games of the summer season, the 11U team came back last week to tie the Hudson Valley Hawks, 10-10, and picked up its first victory of the summer on Wednesday (July 13) by defeating Chargers Baseball, 5-2, in league action at Memorial Park.

Hawkin Brickman pitched five innings for the Bulldogs, striking out 12; Colin Witkowski went the final inning to earn the save. “Brickman had great control and confidence, and showed a great pickoff move, so he kept the runners close all game,” said Coach Brian Soltish. He also said the team got great defense in the first inning from Gavin Barone. 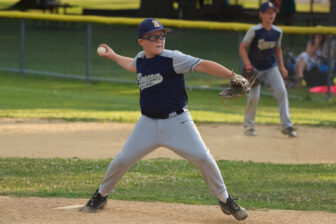 Hawkin Brickman delivers a pitch in the 11U game on Wednesday at Memorial Park.

Brickman, Coldrick and Barone each drove in runs.

Beacon will host Newburgh at 6 p.m. on July 25 at Memorial Park.

Behind a dominant mound performance by Elijah Epps, the 12U team came back from a 3-1 deficit to take a 4-3 victory over the team sponsored by the Hudson Valley Renegades on Wednesday at Memorial Park.

With his team down by two runs, Epps came on in the fourth inning and was untouchable. Behind a fastball the Renegades were unable to catch up with, Epps didn’t allow a hit while striking out seven over the final three frames. Aiden Heaton started for Beacon and lasted three innings. 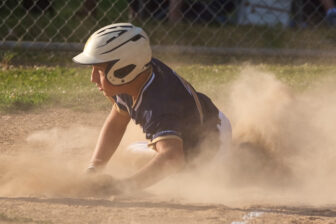 Naim Dika slides into home for the 12U team with the game-winning run on a wild pitch.

“We’ve been preaching to the kids to stay with it when things aren’t going your way,” said Coach Ryan Koval. “Epps has been our top reliever, and he closes the door, but the win was a team effort. Aiden gave us a great defensive play in right field, and Naim and the Varricchio boys [Connor and Nolan] always take the extra base — and that helped us.”

With eight wins in their first 10 games, the Bulldogs have been performing at a high level. “It’s been a little bit of a surprise, but also not,” Koval said. “We push them hard and set them up for pressure situations.”

Beacon is scheduled to host New Paltz at 10 a.m. on Sunday (July 17) at Memorial Park.