Looking for more connections to the arts community after making a Brooklyn-to-Beacon move in 2019, Darya Golubina participated in Beacon Open Studios that year and volunteered the next.

In 2021, there was no event: The complex, volunteer-led showcase was a casualty of the pandemic and burnout. Frustrated, Golubina reached out to longtime Beacon artists and the newer, younger contingent.

“All names led back to Beacon Arts,” which had organized the earlier iterations, she says. It agreed to be a fiscal sponsor for 2022 for the free, self-guided event in which 65 artists have agreed to participate on July 23 and 24, either by opening their studios or sharing their work in group shows.

After talking to a lot of people who had taken part earlier, Golubina felt well-educated in the history of the event and ready to take it on, in an expansive way.

“It’s a full part-time job, requiring both passion and the ability to enjoy reading through 40 emails at the end of my workday” — she’s a photographer who commutes to Manhattan most weekdays — “but my goals were set, and it’s been fun, particularly getting to know everyone on a deeper level. It helps being an artist myself, coming at it from the inside. So many artists move here for the community, and are trying hard to connect with others and also to have their work seen.” 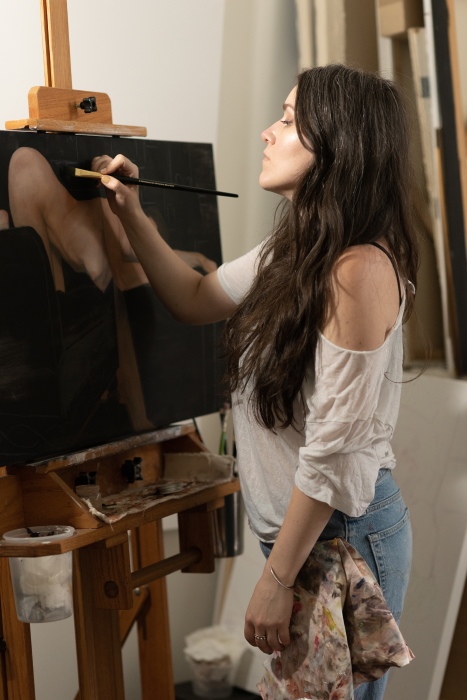 Art was a conduit for communicating even before Darya Golubina, at age 8, moved with her family from Ukraine to Brooklyn.

“I have photos, taken when I was 3, that show me sitting by myself on a bench or a stool in front of our apartment building in Kiev, drawing,” she says. “As I came into my own, I connected with people through art. Coming here, to a foreign country, not knowing the language, teachers always noticed me sketching and let me draw. They taught me English through art. Honestly, making art is like speaking to me. I can’t remember not doing it.”

Golubina attended the LaGuardia High School of Music & Art & Performing Arts in Manhattan, followed by the School of Visual Arts. Today, she is a painter and photographer who gravitates toward portraiture because the genres “hold each other’s hands,” she says. Because her studio apartment is too small for visitors, she will be showing her work during Beacon Open Studios in the group shows at Hudson Beach Glass and The Landmark.

Golubina hoped for 50 artists to take part and was thrilled when she had 65 committed by the end of June. (Artists pay $25 to $150 to participate.) She stresses that she and other organizers, including Chris Ams and Evan Samuelson, are “not gatekeepers of the arts in Beacon. No one who applied within the deadline was rejected. This is about Beacon and showing all the art that is available here.

“In fact, we wanted to open it up more by reaching out to video and installation artists, so that not all the work took the form of hanging on a traditional gallery-space wall,” she adds. “It also was important to us to set aside locations for artists without studios, or those who had concerns over COVID-19 and people coming into their private spaces.”

Some changes implemented this year include a number of group shows, including at Hudson Beach Glass at 162 Main St. (through Aug. 7), Trash Alley (behind Hyperbole at 484 Main St.), Bank Square Coffeehouse at 129 Main St. and The Landmark at 139 Main St. Photographs of the locations were posted on the Open Studios website to give artists a feel for the spaces offered. A musical showcase is planned for 4 to 7 p.m. on July 23 at Reserva Wine Bar at 173 Main St. And there is more reliance on digital information, to reduce paper waste.

This year, Beacon Open Studios is also part of the rapidly expanding Upstate Art Weekend. “I wrote an application,” Golubina says, “I wasn’t sure they would accept us, as we’re not one location and not ‘an’ artist, and I applied on behalf of a whole town. We are so excited to be a part of something larger.”

Beacon Open Studios opens July 22 with a reception from 6 to 9 p.m. at The Landmark. Group shows and studios, as well as The River Valley Guild Market at 4 Hanna Lane, will be open from noon to 6 p.m. on July 23 and July 24. See beaconopenstudios.com for participating artists and a map. All events are free.