I was out for a run on Mount Beacon two weeks ago when I heard something in the bushes that sounded like a particularly plump deer. I turned my head to look and found myself staring into the eyes of a black bear, less than 10 feet away.

I’ve seen black bears at least a dozen times in the Catskills but never — despite being up there on average once a week, every week, for the last 15 years — have I ever come across one on Mount Beacon.

Fortunately, the incident played out exactly the same as nearly all my bear encounters: The bear made a loud huffing noise and ran away. (The other encounters ended with the bear ignoring me while I peacefully left, or, in one case, the bear running past at full speed without apparently noticing me.)

I got home to find emails with photos of a black bear in the Nelsonville Woods, Facebook posts showing bears roaming through two areas of Beacon and my editor mentioning that, for the first time, he was alerted by a neighbor to a bear ascending his driveway in Garrison near Indian Brook. Seeing bears in our area isn’t new or news. But so many simultaneous sightings across our coverage area in one morning had me wondering if we were in the middle of a Bear Boom. 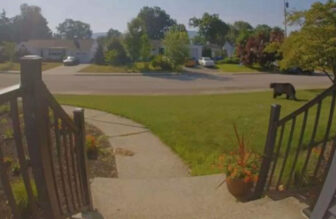 A doorbell camera on West Willow Street in Beacon captured this visitor at about 8:30 a.m. on June 26. (Photo provided)

I called Jonathan Russell, a wildlife biologist who is part of the Department of Environmental Conservation’s bear program for our area. He said the agency hasn’t noticed any dramatic uptick in the bear population but suggested a few reasons for the recent increase in sightings. The first is that with more people working from home these days, and the swell in popularity of doorbell cameras, there are simply more eyes (human and mechanical) on the streets, noticing things that slunk by unnoticed before.

Early summer is also a busy time for bears. It’s when the yearlings — bears that are about 18 months old — get kicked out of their home turf by mom, who is again able to mate. It’s for their own good, as male bears seeking to mate have been known to kill yearlings who are still with their mothers. These yearlings are the ones showing up in most of the local photos. They’re not cubs but not adults, either. Think of them as bear teenagers, out on their own for the first time and looking for their place in the world. Like many teenagers, they lack common sense and eat terribly. 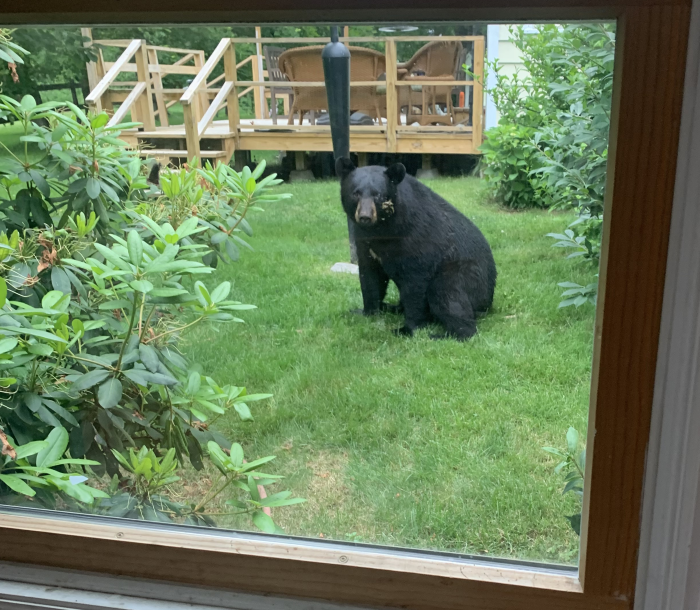 Mike McKee photographed this visitor in Garrison at 5 p.m. on June 16.

June and July is the season of the Great Bear Migration, as hapless bears travel hundreds of miles, learning how to fend for themselves along the way. Since a bear can pick up the scent of something tasty over a mile away, this is the time you’ll find them rooting through your trash, licking your outdoor grill and carrying off your bird feeder, which is why Russell urges you to keep those things secured, clean and emptied.

Should you have your own bear encounter, it’ll probably end the way mine usually do, with the bear running off in a huff. There are things you can do to increase the odds that happens. First, don’t run, because that sends the message to the bear that you are potential prey. Stand your ground, clap your hands, yell, make yourself appear bigger (such as by unzipping your jacket and opening it) and, if necessary, throw something besides food at the bear. If you’re hiking with a dog, keep it close to you and always on a leash. 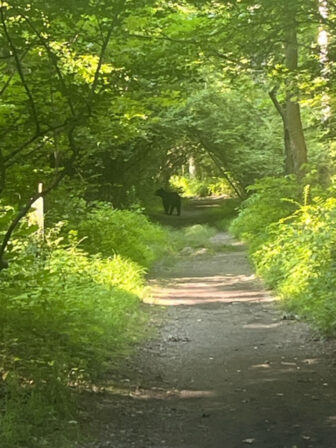 Malachy Cleary spotted this yearling on June 26 on a trail in Nelsonville. (Photo provided)

If you’re hiking with humans, chances are you’ll be making so much noise that the bear will have left before you notice it. For those hiking solo, a bell will alert bears to your presence, although I hate using them because it makes me feel like I am being followed by a reindeer.

In the Catskills, I carry bear spray, which I have never had to use. When I bought mine at Mountain Tops Outfitters in Beacon, co-owner Katy Behney told me of a customer who decided it would be prudent to test the spray immediately rather than be busy reading the instructions while a bear charged. The customer stood a block away from the outdoor patio at Bank Square Coffeehouse and briefly pressed the trigger. Thirty seconds later, everyone on the patio was running inside with red eyes and burning throats. So, you know, go easy with it.

For a bear deterrent that won’t jingle or make you gag, Russell suggests an air horn. This is a good deterrent not only to carry with you, but to keep around the house so that if you see a bear outside, you can walk outside and give it a blast. The sound will alert your neighbors that there’s a bear around, and should send the bear running. Most importantly, this will help send the message to the bear that it does not want to be around people or houses. You’ve heard the saying that bears are more scared of you than you are of them. That’s true, but humans also pose a greater threat to bears: Bears that associate humans and houses with food will become bolder. Russell said that while black bear attacks are unusual, there are a few instances every year in which desensitized bears show up inside houses.

Marcos Antonio, the owner of Rincon Argentino, recorded this black bear outside a home on Main Street in Cold Spring early on a Saturday in May. (Photo provided)

“It’s usually the bear that comes out the worst in those situations because that warrants an action by the department when it’s a safety concern,” said Russell.

Relocation isn’t an option because bears have such huge ranges of travel, they’ll just show up again. The state prefers to leave bears alone as much as possible — even wounded bears will only be euthanized if they’re so injured that they can’t move, as they’ll otherwise usually recover on their own — but a bear that has lost its fear of humans is a bear that will probably have to be killed.

Much like a mother bear and her yearlings, for those of us who love bears, the best thing we can do for them is to stay out of their way.