Low-income residents to have debts erased

Some Central Hudson customers in Beacon and Philipstown will see one-time credits on their bills by the end of the month through a state initiative to erase $567 million in overdue electric and gas charges accumulated by low-income ratepayers during the pandemic.

The initiative, hammered out by a special working group and approved by New York’s Public Service Commission last month, is expected to wipe out the pandemic-related utility debts incurred through May 1 for more than 320,000 residents who are enrolled in programs that assist low-income households with electric and gas bills.

The cost is being covered by $250 million in state funding, $100 million from the federal Emergency Rental Assistance Program (ERAP) and $36 million from Central Hudson and the state’s other utility companies. The balance, $181 million, will be paid with a surcharge collected from all utility customers, according to the state.

Central Hudson, which is receiving $2.9 million in state funds, had nearly $6 million in arrears — defined as bills past due by 60 days or more — from low-income customers as of May 1, according to the Public Service Commission, which regulates utilities. It expects to apply the credits for qualifying customers by Aug. 1. 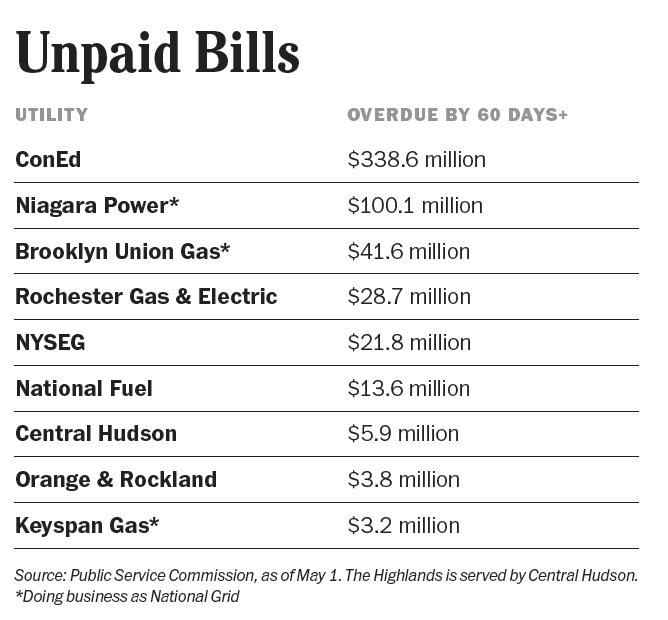 Residents enrolled in Central Hudson’s Bill Discount Program, or who join by Dec. 31, will be eligible if they have received assistance with unpaid utility bills through the state’s home-heating program, ERAP, said Joe Jenkins, a representative for the utility.

Credit amounts will vary by customer, he said, and those whose balances are forgiven will still be responsible for charges after May 1. Central Hudson estimates all of its customers will see a surcharge of 0.5 percent for a year to help pay for the debt relief.

The Public Service Commission, in its order approving the initiative, described the current amounts of arrears as “unprecedented.” As of June, business and residential utility customers statewide owed back payments of $2.3 billion, or more than double what was owed before the pandemic, said the PSC.

A statewide moratorium on disconnections that was in place since the beginning of the pandemic ended in December. But utility companies, said the PSC, agreed to keep a moratorium in place for low-income customers until Sept. 1 while working on a long-term solution to the arrears problem as part of the Energy Affordability Policy Working Group.

In addition to the utility companies, the group’s membership includes staff from the Department of Public Service, which provides technical support to the PSC, and consumer-advocacy groups such as AARP, the Public Utility Law Project and Citizens for Local Power.

While the working group crafted a strategy for arrears, utility customers dealt with another blow: a spike in energy prices this winter. In February, Central Hudson warned customers that gas and electric bills would rise by 33 percent due to a variety of factors, including a period of extremely cold weather and higher demand for natural gas.

Although the initiative targets low-income residential customers, the working group also has been asked to recommend ways to reduce the increase in arrears for residents who are not low-income, and for business customers.

One thought on “Utility Relief on the Way”