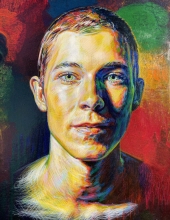 He was born Aug. 30, 1987, in Toledo, Ohio, where he attended Maumee Valley and St. John’s Jesuit high schools. He studied art and philosophy while earning a bachelor’s degree from Boston College and then went on to the California College of the Arts and Rhode Island School of Design for his MFA in sculpture

Bobby had an intense passion that he brought to whatever he chose to do, his family said. As a boy, he created stop-motion animation videos using clay and a video camera — in one video, penguins emerged from a ball of clay, danced, and return to the clay.

He liked architecture in grade school and early high school, imagining and building homes using pasteboard and Exacto knives. He also liked to draw and paint, play video games and make jokes; he played paintball for a number of years. He liked to crouch on his heels, whether while talking with friends and family, smoking a cigarette, or eating cereal with the bowl perched on his knees.

Soon after graduating from Boston College, Bobby had what may have been a psychotic break probably exacerbated by drugs and alcohol. He said he was going to make the most beautiful work of art in the world. He went to rehab and, soon after, committed himself to helping others struggling with addiction.

He also began going on meditation retreats where he would sit silently for months at a time. While living in Boston through his mid-20s, Bobby was an active member of the recovery community. He started a recovery meeting in a suburb of Boston that still meets a decade later, often with more than 80 people in attendance.

In his mid-20s, Bobby committed himself to art. At the Rhode Island School of Design, he produced “Place for Continuous Eye Contact,” the first in a series of installations that he continued to work on in New York City and Beacon until the end of his life. The works were intended to help bring about world peace by offering the viewer an experience similar to what Bobby had discovered on meditation retreats. His installations are composed of LED lights, glass lenses, colorful pom-poms, mirrors, music, and other materials; the works soften the boundaries between self and other.

Along with Beacon, Bobby showed his work in Providence, Rhode Island; San Francisco; New York City; Brooklyn; and, most recently, the parking lot of the Wal-Mart in Newburgh. It appeared in publications such as Art Forum, Gothamist, Hyperallergic, the Brooklyn Rail, ArtNet, Bedford + Bowery

Bobby is survived his parents, Jane and Bob Anspach, and his brothers, Michael Anspach (Shuhra) and John Anspach. A memorial celebration will be held on July 30 at the Carranor Hunt and Polo Club in Perrysburg, Ohio. Bobby loved sending his mother flowers; if you are so moved, please send her plants or flowers of any kind.