Beacon’s summer travel team for players ages 12 and younger stayed hot last week, along with the weather, picking up two Greater Hudson Valley Baseball League victories: a 7-2 win on Sunday (July 17) over New Paltz and a 9-2 win on Wednesday over a team sponsored by the Hudson Valley Renegades.

On Wednesday at Shepherd Park in Fishkill, Parker White started for the Bulldogs and went three innings, striking out seven and allowing two hits and no runs, to earn the victory. Elijah Epps pitched two innings, and Naim Dika closed.

Epps had a big day at the plate, going 3-for-3 with a pair of two-run homers. Nolan Varricchio and Dika each drove in two runs, and Connor Varricchio had a RBI.

“For a hot day — it was 100 degrees when we started — the kids stayed with it,” said Coach Ryan Koval. “It was the same for both teams, but we got a great job from White — he took it to them. He was in the zone from the get-go, and never faced a threat. And both relievers looked strong.

“Offensively our guys had good at-bats,” he added. “We’ve been trying to get them to understand that there are lots of ways to have ‘team-first’ at-bats, and they’ve been doing a great job of it.”

On Sunday at Memorial Park, Beacon was led on the mound by Nolan Varricchio, who started and picked up the win, and Dika, who closed.

White provided the offensive power, bashing a pair of home runs and finishing with five RBI. Dika homered and went 2-for-2 and Hudson Fontaine drove in a run.

“Varricchio threw well early,” Koval said. “And Dika gave us three innings on 30 pitches. White has been heating up at the plate at the right time.”

The team closed out regular season play this week and is preparing for the playoffs. “We just want to keep it rolling and fine-tune,” the coach said.

Apparently inspired by a pregame visit from former Beacon High School pitcher Lenny Torres Jr. (below), the 15U team fought back from a seven-run, third-inning deficit to edge the Northeast Pride, 10-9, in a Greater Hudson Valley Baseball League game played Tuesday at Beacon High School. 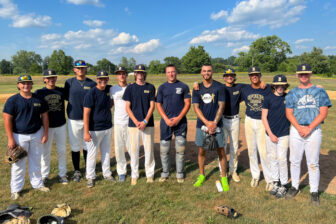 Former Beacon High School pitcher Lenny Torres Jr. (fifth from right), who plays in the Cleveland Guardians minor-league system, stopped by the school’s baseball field on Tuesday (July 19) to visit the 15U travel team. Some of the players were freshmen when Torres Jr. graduated in 2018 and was selected as the 41st pick in the Major League Baseball draft. “Lenny knows a lot of the players from having them in camp four years ago,” said Beacon’s varsity coach, Bob Atwell. “The guys love to see him.” Although Torres Jr. is 21, Atwell said his players tried to convince him to pitch a few innings in their game that day, which wouldn’t have sat well with their opponent or the Guardians. Torres Jr. is on the roster this season of the Lake County Captains near Cleveland, which competes at the same minor-league level as the Hudson Valley Renegades. He is temporarily inactive with the team following the death of his father to cancer on July 7.  (Photo provided)

The Bulldogs (18-2), who have played outstanding this summer, fell behind 3-0 in the first inning, gave up a run in the second and were victimized for three in the third.

“They get kind of ornery when they’re behind and not playing well,” said Coach Bob Atwell. “They had a choice of packing it in or fighting; they decided to fight. You could see the different demeanor after the third; they weren’t playing the way we were accustomed to playing.” 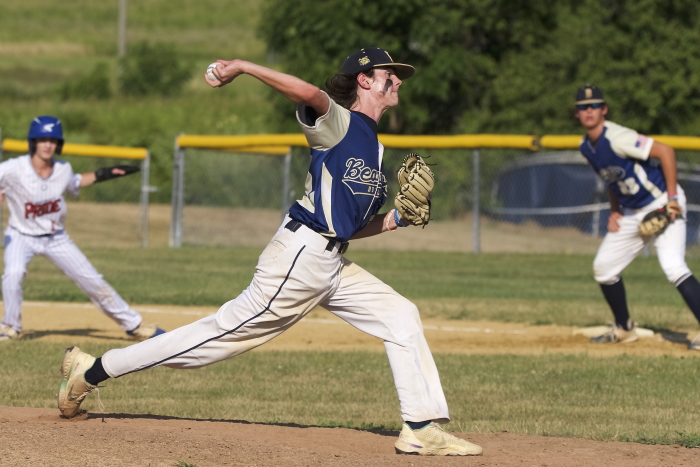 Derrick Heaton delivers a pitch against the Northeast Pride. (Photo by S. Pearlman)

The Bulldogs scored four runs in the third and trailed 8-7 entering the sixth and final inning.

With two out in the top of the sixth, Beacon rallied for three runs. Liam Murphy started it off with a double, then Jackson Atwell and Derrick Heaton each drove in runs, leading to Mikey Fontaine’s RBI double, the eventual difference-maker.

Mercer Jordan picked up the win in relief, with Nick Albra earning a save. Heaton started the game, and Anthony Borromeo also pitched. 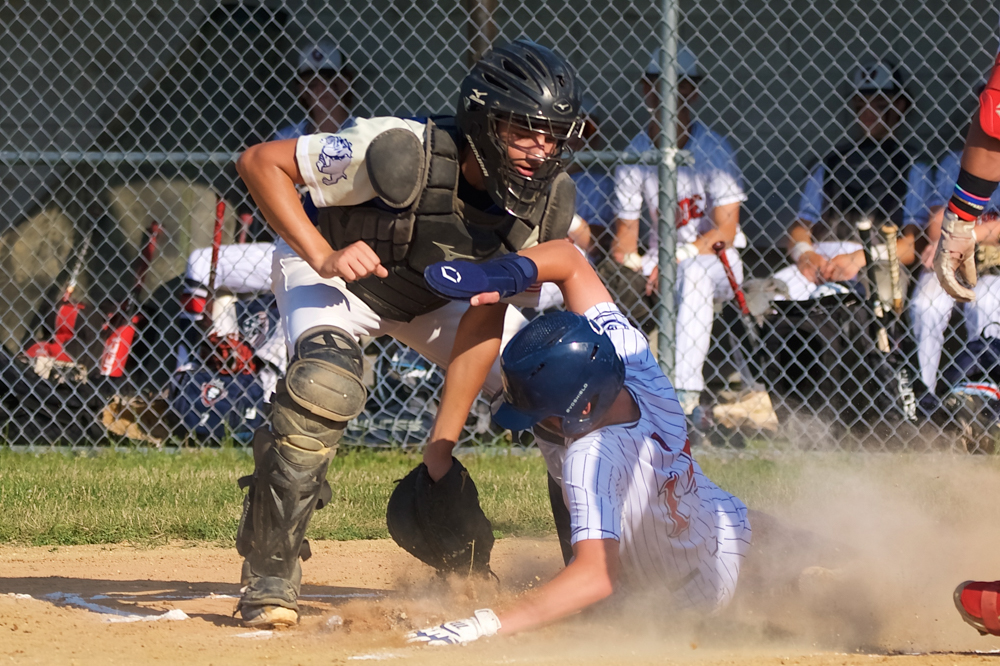 Catcher Mikey Fontaine puts the tag on a runner at home in Wednesday’s 10-9 victory. (Photos by S. Peralman)

“We got some clutch hitting in the sixth inning, and in each of the last four innings,” Atwell said. “And we also got a great job from our relief pitchers — Jordan gave us quality innings, and Albra came in and shut it down.”

Earlier, on July 16, Beacon won both games in a doubleheader against the Hudson Valley Renegades, 16-2 and 15-5. 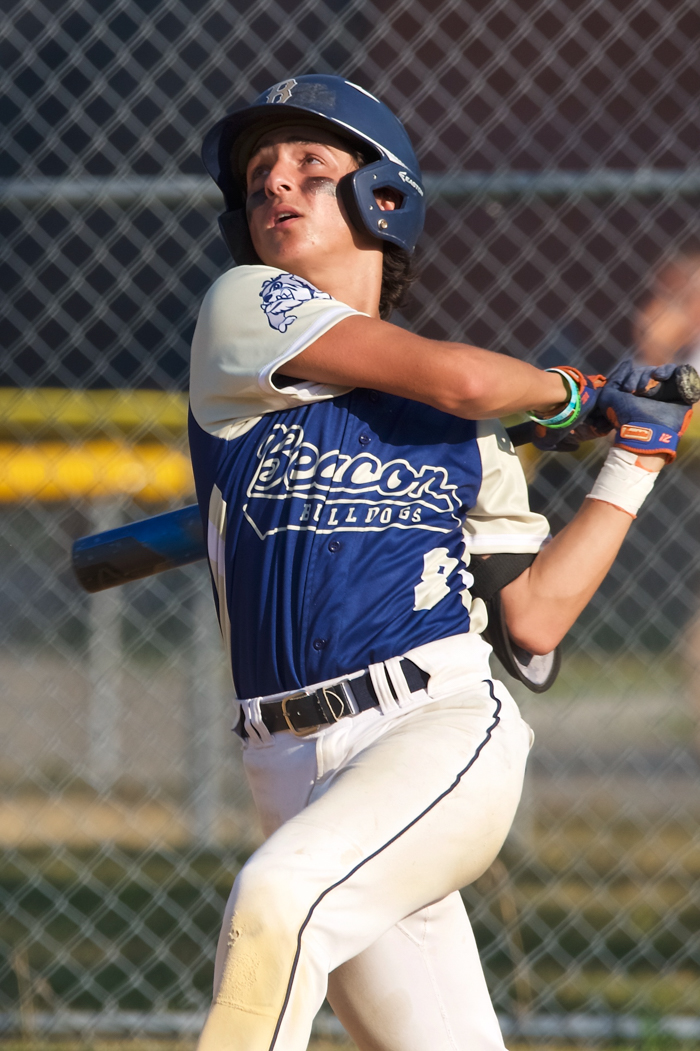 Jackson Atwell had an RBI in Beacon’s comeback win on Wednesday night.

Fontaine picked up the win in the first game, striking out nine in four innings. Heaton drove in three runs, Ronnie Anzovino went 3-for-3 with two RBI, Jordan was 2-for-4 with two RBI and Murphy drove in two runs and went 2-for-3.

The Bulldogs are scheduled to close the regular season at Lagrangeville on Thursday (July 21) and at Stamford, Connecticut with a doubleheader on Saturday (July 23). The playoffs start next week.