A few weeks ago, I ran into my dear friend Jane at a party in a meadow under a sprawling old oak tree. With typical warm enthusiasm, she told me that both she and her aunt had recently made “that wonderful drink” I wrote about in this paper many years ago.

While I scratched my head trying to remember which drink she was referring to, she proceeded to tell me that my cocktail had become a summertime standard for both herself and her aunt.

My slipshod memory notwithstanding, this was cheering news. I am always deeply gratified to learn that one of my culinary creations has gone out into the world and found a happy new home. The truth is, whenever another person loves anything I love — a song, a dish, a park, a pastime — the world feels somewhat less lonely.

Paradoxically, letting go of something dear also foreshadows a bigger loneliness, and in particular the loneliness of parenting: You create something you love, then release it into the world.

It so happens that the Spring Tizzy (which I later discovered was the name of the drink now in Jane’s repertoire) was the last cocktail recipe I ever published here. That was in 2014, when all three of our kids were still in middle school. This coming fall, our youngest will begin college, and his older brothers are already well past legal drinking age.

When the kids were little, I frequently made smoothies on summer nights, particularly if we’d sat down to a dinner devoid of vegetables. If supper had consisted of nachos or pasta, for example, “dessert” would be frozen berries, a banana, orange juice and some kind of alt-milk whirred together in a blender. We all loved them.

Back in those days, I also often liked to invent cocktails for special occasions, drinks that might play off against the flavors of a holiday feast or birthday dinner. The Spring Tizzy began as one of those.

These days, any cocktail ingredients that find their way into my house are less likely to turn up in a new libation than to pile up in resealable plastic bags in my freezer: three-quarters of a bottle of prosecco that I opened for a recipe requiring a half-cup; half a can of coconut milk or crushed pineapple; and lime juice squeezed from zested limes that were starting to mummify on the counter.

After my conversation with Jane, I decided it was high time to share a new cocktail recipe, and soon realized that it had to be chilly in anticipation of this week’s heat wave. Back in May, I’d come across an intriguing recipe by a bartender named Marlowe Johnson of Detroit’s Candy Bar. The combination of ingredients lodged like a burr in my brain, but when I went to make it I couldn’t find the recipe so I improvised and messed it up — in a good way, I think.

The first time I made it, most of the ingredients came from my freezer: not only the strawberries, but also the coconut milk and the prosecco. The result was thick and creamy, and both my son, Henry, and his girlfriend gave it an enthusiastic thumbs-up.

I made a few test batches the other night and offered a sample to his brother, George.

He took a sip.

I watched him. What? Too much gin? Not enough coconut? More agave?

He tasted again. Then his face cracked into a grin. “This is a smoothie!”

And you, dear child, are an adult. 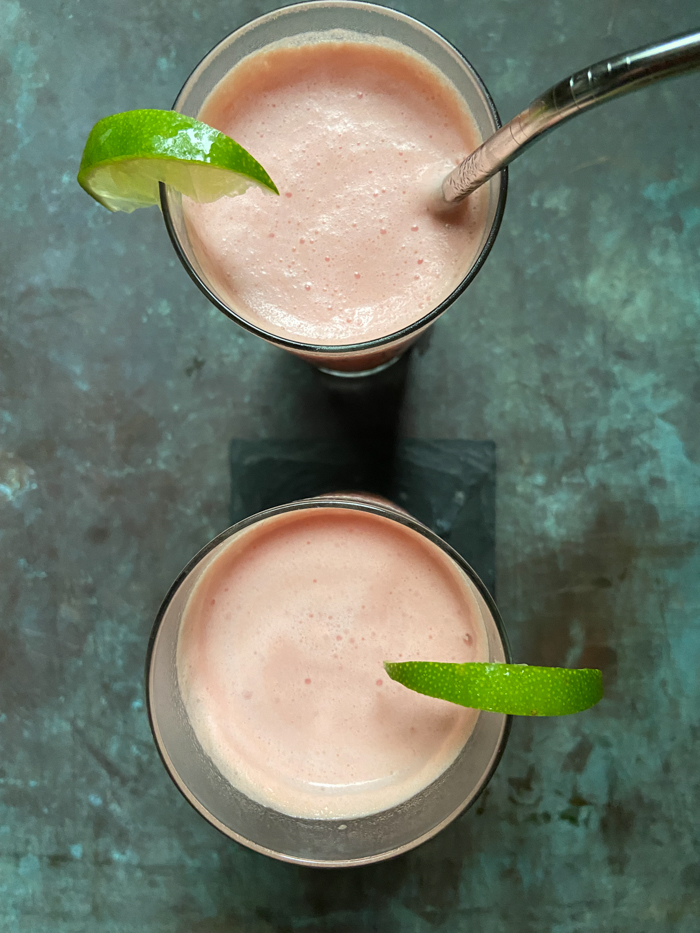 Note: When I originally made this, I used leftover prosecco and coconut milk that were stored in my freezer, and the drink came out extra creamy, and needed no additional ice. If you make it with chilled or room-temperature ingredients, add ice to the blender to create a thick, frozen drink.

Place the strawberries, gin, coconut milk, lime juice, agave and ice (if using) in the blender and whir until thick and smooth. Add the prosecco and blend briefly, just to combine. Serve at once, in chilled glasses, with a lime wedge as garnish.