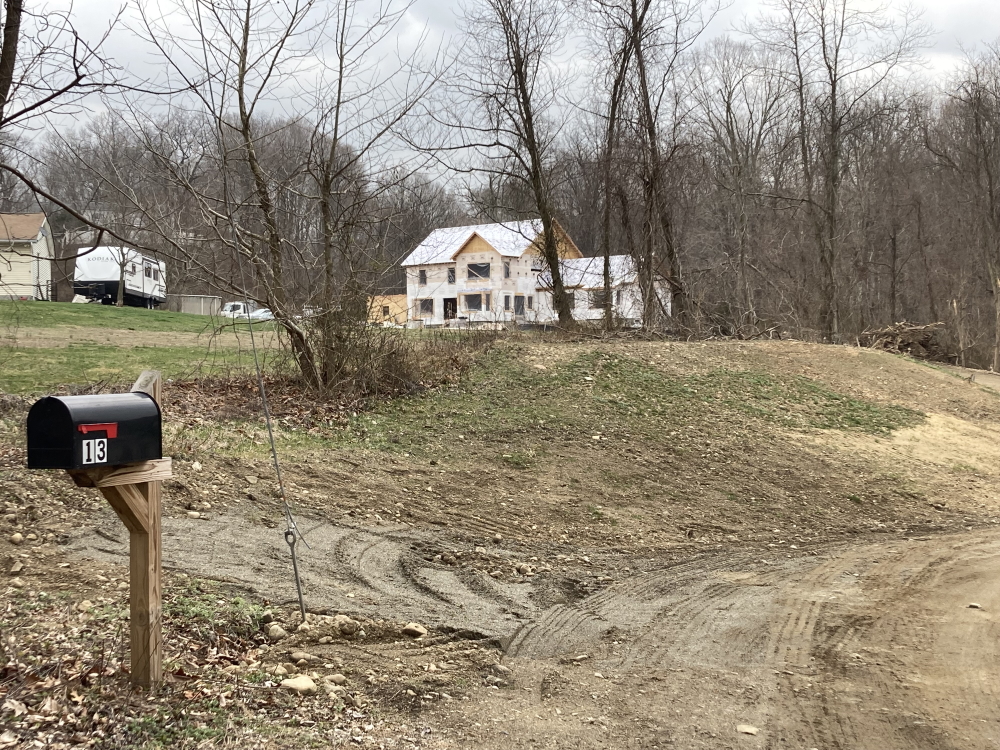 A resident of Nelsonville has sued the village, saying a neighbor’s home (shown in March) is being built on what was designated as parkland. (File photo by L. Sparks)

Nelsonville last week asked a state judge to dismiss a lawsuit filed by a resident who contends that the construction of a home on Gate House Road violates a long-dormant plan to use the land for a park.

In a filing dated July 14, the village asserted that Marc Kushner, who sued Nelsonville in March, lacks legal standing. A village lawyer, Thomas Cummings, said he plans to formally seek dismissal of the lawsuit at a hearing scheduled for Aug. 16 in Carmel.

Kushner wants the court to permanently stop construction on the 4.4-acre site and invalidate a 2021 building permit, and for the village to force owner John Duggan to tear down the 5,870-square-foot home, which is under construction. Duggan purchased the property in 2018.

The underpinnings of the dispute date to 1987, when Harold Lyons subdivided 9.4 acres into four parcels, three for homes and a fourth that he wanted to give to Nelsonville for use as a park. A plat map recorded in Putnam County that year designates the fourth parcel, now owned by Duggan, as a “reserved area — not a building lot.”

Thirteen years after Lyons offered to donate the land, the village’s then-mayor wrote to tell him that Nelsonville “was unable to accept the 4.4-acre lot reserved for recreation.”

However, according to both sides in the present lawsuit, the Village Board never took a vote to officially reject Lyons’ gift.

Cummings said in the July 14 filing that the Village Board plans to adopt a resolution formally rejecting Lyons’ long-ago offer. As of Wednesday (July 20), it had not scheduled that vote, said Mayor Chris Winward.

In a June 2021 letter, Steven Marino, who chairs the village Planning Board, called the 1987 map “preliminary” and stated that Nelsonville regarded the parcel as “a buildable, residentially zoned vacant lot” that is “undesirable and unacceptable for use as a park.” A day later, the village issued a building permit.

In his lawsuit, Kushner, who lives on an adjacent property on Wood Avenue, asserts that the notation on the 1987 map forbids construction and that Duggan’s deed to the site calls attention to its “reserved” status. His lawsuit names Duggan, as well as the village.

Nelsonville argued in its response that Kushner has no case because, among other things, “there is absolutely no indication that Lyons intended to benefit [Kushner] specifically” in 1987 or allow any member of the public to enforce a restriction. It further said that Kushner had not complained to the Zoning Board of Appeals and thus had not “exhausted his administrative remedies” before suing.

Citing previous court decisions, the village claimed it is not obligated to enforce the notation on the 1987 plat map and that neighbors have no right to demand rigorous enforcement of land-use laws on someone else’s property.

According to court documents, Kushner recently wrote neighbors to explain his concerns and forwarded a letter by his attorney, Scott Steiner, addressed to the Planning Board, urging it to order Duggan to raze the home and restore the land to its previous state. Such action is necessary because the Planning Board “has abdicated its responsibility,” Steiner stated. If the board fails to act, the letter warned, the village can expect another lawsuit.

One thought on “Nelsonville Asks State Judge to Dismiss Lawsuit”