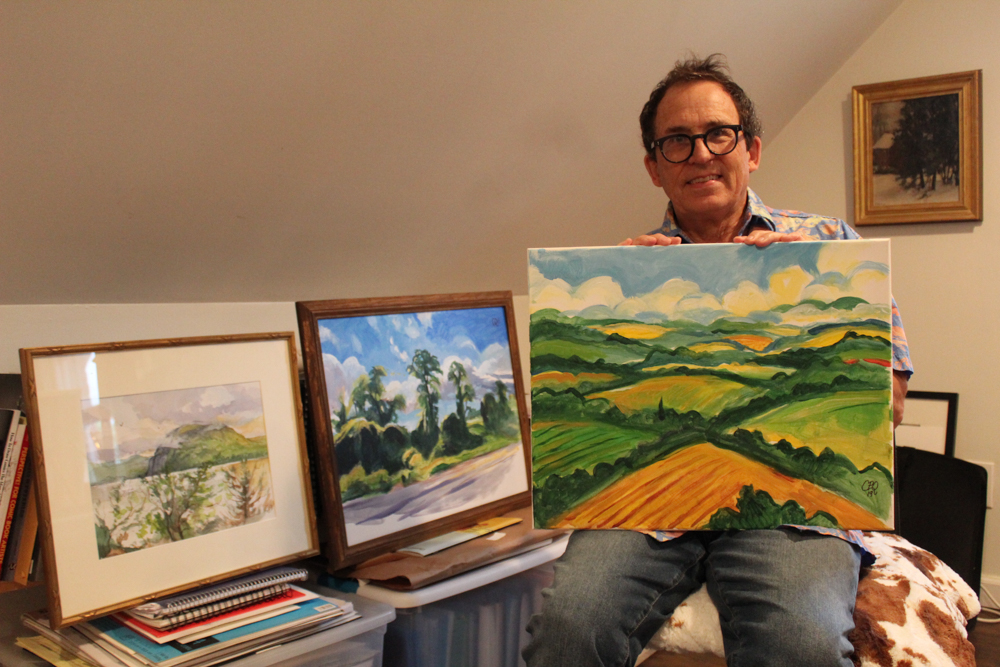 Cyrus Quadland, who lives in Beacon, contributed to a show of artwork by military veterans held in June at the Library of Congress in Washington, D.C..

How were you introduced to art?

I started when I was 6 or 7 years old, drawing and copying cartoons. I had babysitters who were artists. My mother was mentally ill, so she was often not home, sometimes for as long as two years, and my father traveled a lot on business. We lived in an old farmhouse in Somers and I would sit in my room and draw.

What do you paint?

I like combinations of abstraction and realism, and stylized forms. I do a lot of watercolors. Lately I’ve gotten interested in writing and illustrating books for kids. I did one called Sunny Runs Away about a cat in Beacon whose owners move away and leave it by itself. I did another, Eva the Elf, about an elf who can transform into anything she wants.

Who organized the library exhibit?

A nonprofit called Uniting US. A veteran named AnneMarie Halterman had this idea that art could help veterans with PTSD [post-traumatic stress disorder]. She gathered art and arranged exhibitions at the D.C. airports, Arlington National Cemetery and, most recently, the Library of Congress. Each person can contribute as many artworks as he or she wants and leave it with her for however long you want. I participated in a veterans’ exhibit at the Franklin D. Roosevelt Library [in Hyde Park] and the organizer recommended that I get in touch with her. I have about 10 artworks with them. It’s really neat, actually.

When did you deploy to Vietnam?

In 1970, when I was in college. I won the draft lottery and got sent to “Uncle Ben’s Rest Home,” which was Fort Benjamin Harrison in Indianapolis. I was trained in Army finance. When I got to Vietnam, they said, “You don’t want to go to Quang Tri; the planes are being shot at.” I said, “I’m in finance; I’ll never get sent there.” Of course, when they called out names, I heard: “Quadland, Quang Tri.” It was right near the border with North Vietnam. I met a lot of nice people, but there were rocket attacks and mines. At one point, the North Vietnamese mined the ammunition dump, which was the size of multiple football fields. It started going off at 2 a.m. and when we went to breakfast at 7 a.m., it was still exploding.

How does art help veterans cope?

For some, it’s a way of channeling anxiety and expressing their fears, creating something beautiful out of something terrifying. It gives me the idealistic sense that I can create a masterpiece, although I hardly ever do. Your brain takes these elements that you’re thinking of — the colors, lines and shapes — and guides you to create. You lose your sense of the moment and escape into that.