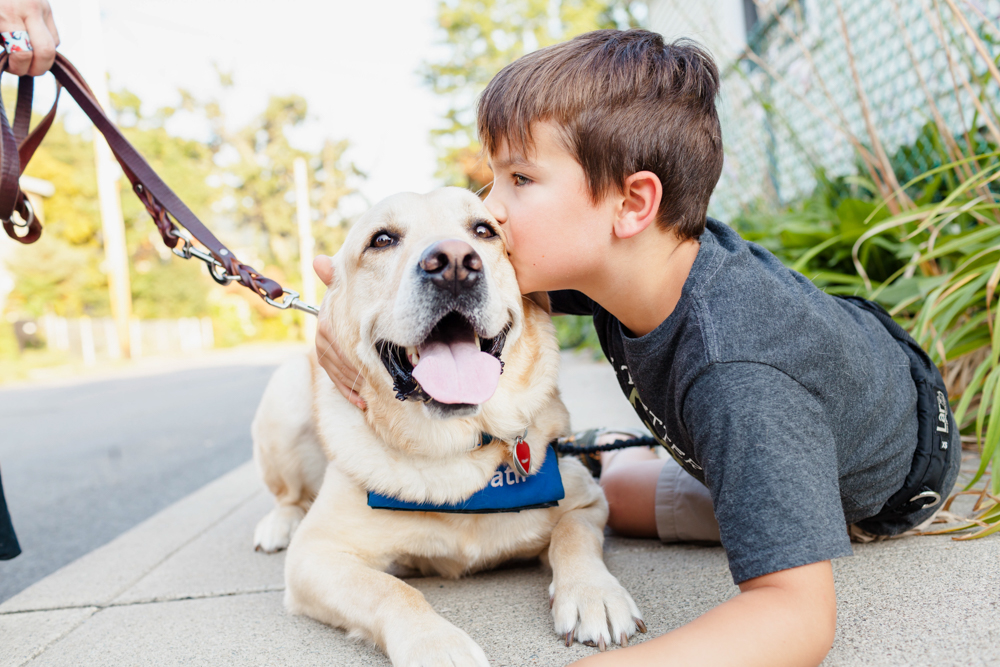 When Hudson first met Penn, he asked: “Is this my new brother?” (Photo by Valerie Shively)

Andi Bettencourt, a single mother of an autistic child, recalls feeling homebound in Beacon long before the pandemic began.

Like many autistic children, her son, Hudson, now 6, is quick to “elope.” It started when he was about 2½ and could happen anywhere — in the grocery store or among a crowd of strangers. “They can’t process something, so they just run,” Bettencourt explained.

It had happened with Hudson on Main Street, and his mother feared the worst. He could get lost, or run into traffic. “I didn’t feel safe going anywhere with him because I was afraid I would lose him,” she said.

That changed in October, when she and Hudson were paired with Penn, a 3-year-old golden retriever/Labrador mix, by BluePath, an organization founded in 2016 to provide free service dogs for children with autism. 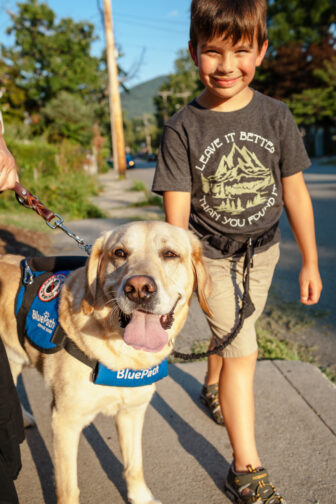 Research has shown that dogs can help autistic children, who often have trouble socializing, break the ice and grow more comfortable around peers. In 2013, researchers at the University of Missouri who surveyed families with autistic children found that two-thirds owned dogs.

From an early age, Bettencourt knew her son was “a little bit different.” He couldn’t “self-soothe,” and had trouble sleeping, at home and in day care. When he would get upset, he often wasn’t able to explain what was bothering him.

In early 2020, when Hudson was 4, he was diagnosed with “high-functioning” autism, which means that while he exhibits no intellectual disability, he struggles with communication, emotion recognition and expression, and social interaction.

One of Bettencourt’s co-workers suggested she contact the nonprofit BluePath Service Dogs, which is based in Hopewell Junction.

If a family qualifies for a dog, one or both parents stays for five days at a training facility in Wappingers Falls to get to know their dog and learn commands. The animals are trained to obey the parent, but “they become the best friend to a lot of the kids,” said Michelle Brier, a BluePath representative.

BluePath partners with organizations around the country that train service dogs — getting them used to human touch, wearing vests that indicate they’re service dogs and tolerating the noises they may be exposed to around an autistic child. The dogs, who are raised by volunteers, are trained from birth and typically placed with a family when they are 2 to 3 years old.

Since its launch, BluePath has placed 35 Labradors and golden retrievers with families within a two-hour drive that extends into Connecticut and Pennsylvania.

Although Bettencourt feared Hudson might not qualify for a dog because he had been classified as high-functioning, her application was approved. Soon after, BluePath brought three dogs to visit, and the connection with Penn was immediate. “Hudson laid down on the grass and said, ‘Is this my new brother?’ There was no hesitation,” Bettencourt said.

With Penn, the family has more flexibility to go out without fear of being separated. Penn, wearing a blue vest, is connected by a three-foot tether to a harness that Hudson wears around his waist. 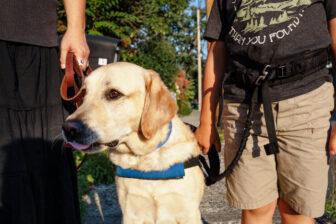 On walks, Penn stays connected to Hudson with a tether and harness. (Photo by Valerie Shively)

Hudson may still get upset away from home, but if he starts to pull away, Penn will stop and brace himself, keeping the boy from running, Bettencourt said. In other situations, she will give Penn a “down” command and have Hudson sit next to him and breathe deeply, counting on his fingers as he inhales and exhales.

Before Penn, “I couldn’t turn around; I had to have my hands on him,” she said.

Shortly after Penn arrived, she and Hudson attended the Great Jack O’Lantern Blaze in Croton, a nighttime event with thousands of illuminated pumpkins, for the first time. They’ve been able to walk along Main Street with new confidence. They can eat lunch at the Yankee Clipper Diner, or thumb through books at the Howland Public Library, or even navigate the tight space inside Binnacle Books. Earlier this year, mother and son went on vacation for the first time, to see the mansions at Newport, Rhode Island.

Having Penn has helped Hudson, who loves to talk, improve his social skills. People will approach and interact with him on the sidewalk, or, if he’s having an issue, “people will see the dog and give him space,” his mother said.

If Hudson has a bad day at school (he attends Sargent Elementary), he has learned to lay on the couch with Penn when he gets home, giving himself time to process. If Hudson is in a good mood and just needs attention, Penn is “only working when the vest is on,” Bettencourt said. “When he has it off, he’s a goofball,” stealing Hudson’s toys and running away.

The hope is that Penn will live a long life (golden retrievers and Labradors have life expectancies of 10 to 12 years) and assist Hudson into his teenage years, but Bettencourt said she doesn’t worry about that yet. She’s thankful for the last nine months.

“Being the child of a single parent is difficult,” she said. “Hudson needs continuous input. Now, if I’m cooking dinner or cleaning, he can interact with Penn. They’re together 24/7.”

Added Hudson: “My life is much better. He gave me lots of love.”

One thought on “A Boy and His Dog”