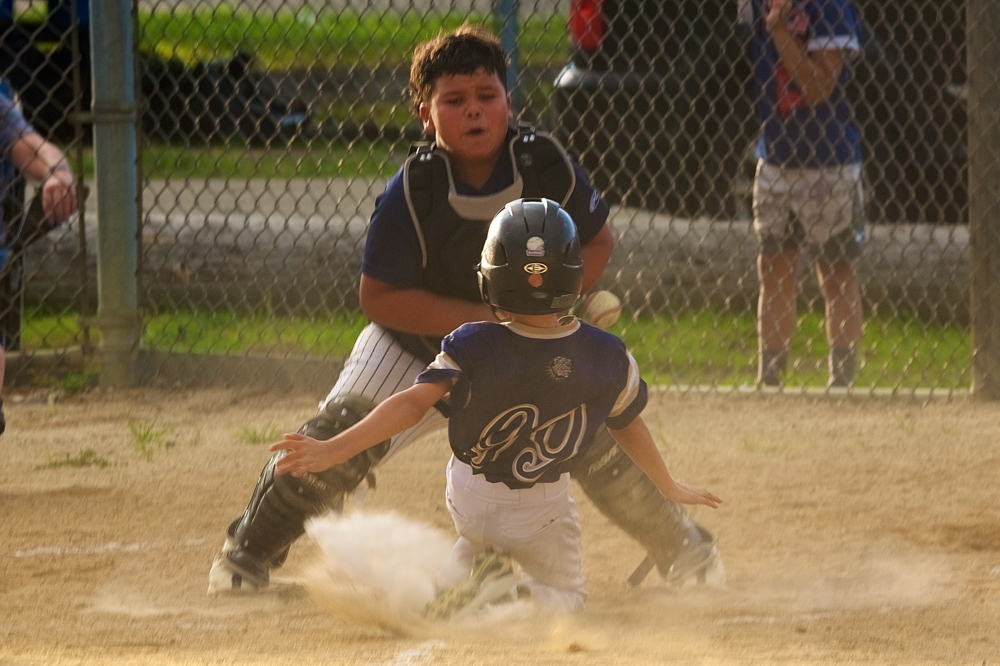 Beacon’s Max Digneo (99) slides in safe at home after the throw hit him in the back Monday during a 9U game at Memorial Park. (Photos by S. Pearlman)

Beacon’s travel baseball team for players ages 9 and younger continued its hot play this week, picking up a 3-0 win Monday (July 25) at Memorial Park over a strong squad sponsored by the Hudson Valley Renegades.

The Bulldogs (10-2), who play in the Greater Hudson Valley Baseball League, triumphed behind the shutout pitching of Easton White, who went 5⅓ innings, with five strikeouts and three walks, allowing just one hit. Reliever AJ Constantino completed the shutout. 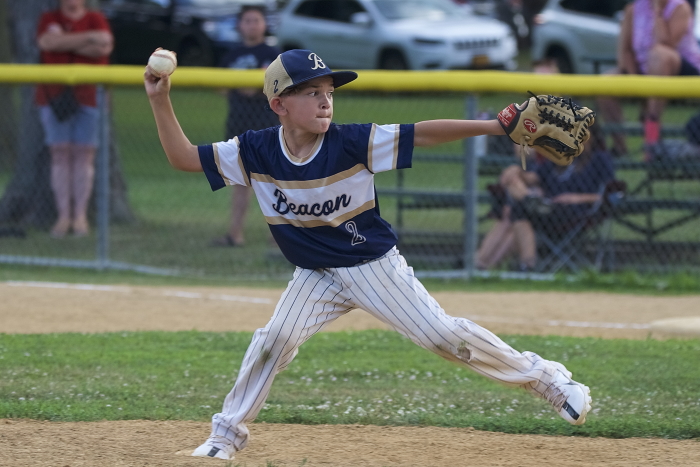 Easton White gave the 9U team a strong outing Monday against the Renegades.

“The story of that game was Easton,” said Coach Jed Varricchio. “He kept a good team guessing and off-balance. And our defense played flawless behind him. Will Varricchio made some great catches in the outfield, and Ryan Spooner and Evan Eraca came up with big plays on the infield.

“We work hard in practice to be a fundamentally sound team, and today it showed,” he said. “They understand that defense can win ballgames when the bats go quiet. We managed to scratch out three runs on walks and stolen bases.” 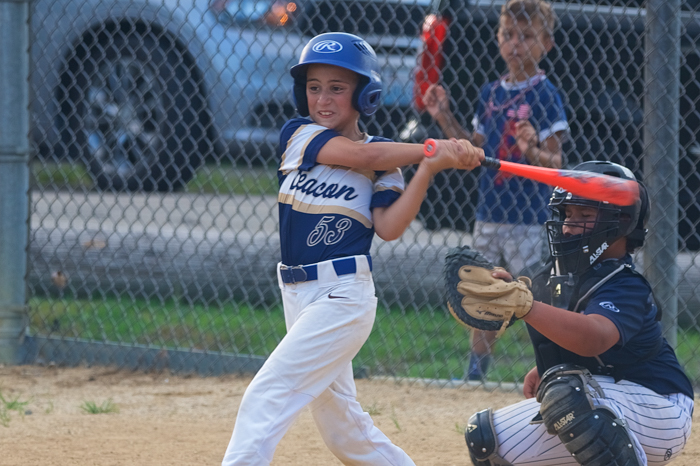 Leo Virgadamo takes a swing for the 9U Bulldogs on Monday against the Hudson Valley Renegades.

On July 22, Beacon picked up an 11-1 win over Wappinger at home and on July 20 an 11-1 victory over East Fishkill, also at home. The playoffs begin this week.

The 11U team closed out its short season last week with a pair of wins, finishing a seven-game stretch at 4-2-1, and with a four-game win streak. “We played a lot better after losing our first two games,” said Coach Brian Soltish. “They picked up the intensity and played good baseball the rest of the way.”

On Tuesday, the Bulldogs recorded a 6-5 win at home over the Orange County Smash, with Hawken Brickman and Connor Coldrick turning in solid performances on the mound. At the plate, Coldrick went 2-for-3 with a pair of RBI.

“It was a back-and-forth game the whole way,” said Soltish. “We got great pitching from Brickman and Coldrick — they didn’t give up a lot of walks, and they threw a lot of strikes.” 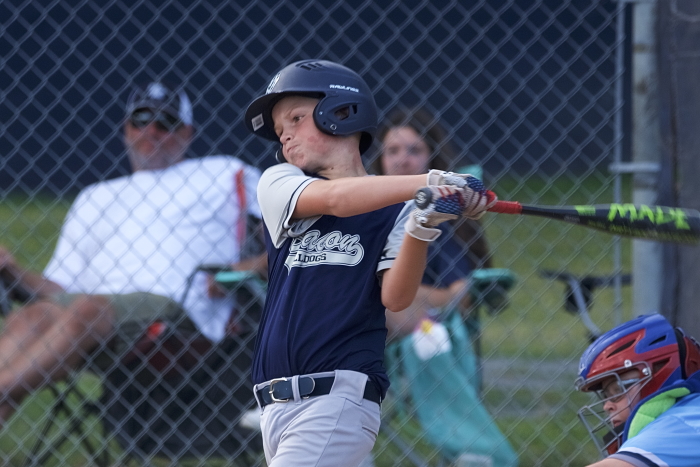 Connor Coldrick went 2-for-3 with a pair of RBI in a win over 11U Orange County.

The game was tied at 4-4 going into the bottom of the fifth inning when the Bulldogs scored twice, both on errors. The Smash scored in the top of the sixth and had the tying run on second base with one out when Coldrick got a pickoff and a strikeout for the win.

“It’s always nice picking runners off base,” Soltish said. “It means the guys are paying attention.”

A day earlier at Memorial Park, the Bulldogs rolled past Newburgh, 14-9. Jonah Hanby earned the win on the mound, and Colin Witkowski pitched in relief. In addition, Hanby also went 3-for-4 at the plate and drove in three runs. 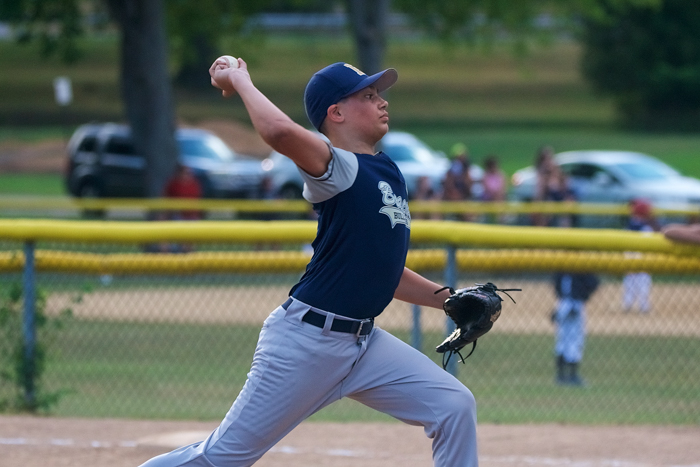 Jonah Hanby earned the 11U win on the mound, and drove in three runs, against Newburgh.

“Jonah hadn’t pitched in a while, but he was excellent,” Soltish said. “His control was outstanding. Offensively, we came out swinging. Jonah crushed one and we had a lot of guys get on base.”

The 11U team is not participating in the league tournament. 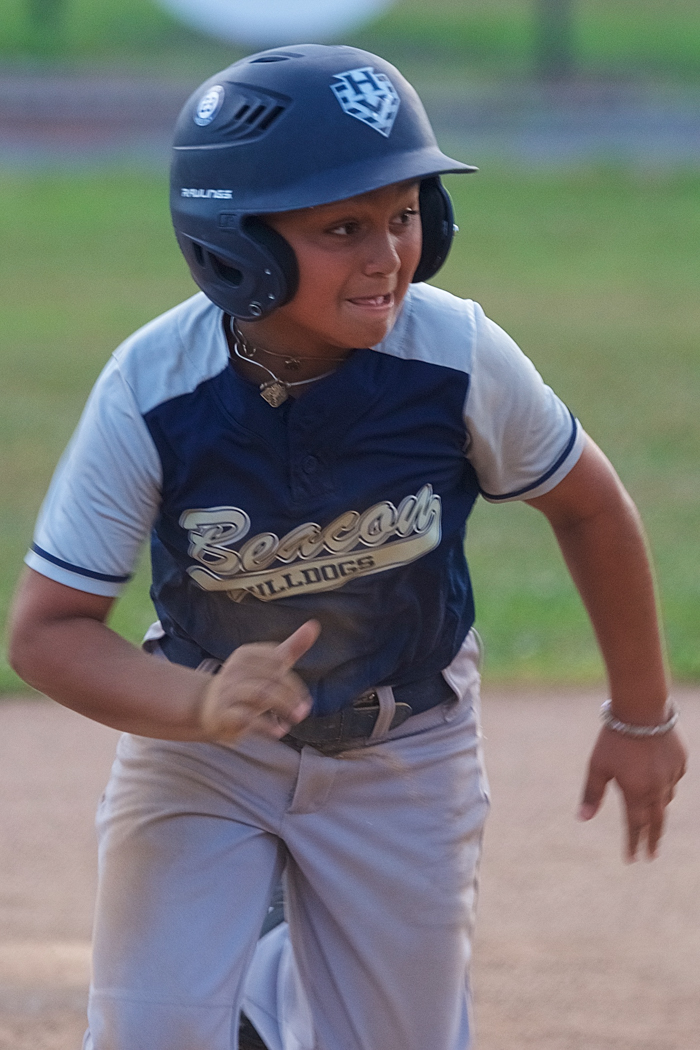 Gavin Justice hustles from second to third for the 11U team.

Beacon’s 12U team closed out its summer season on July 21 with an 11-7 loss at Marlboro, snapping the Bulldogs’ five-game win streak.

Aiden Heaton went 3-for-3 with three RBI; Naim Dika homered and finished with two RBI; and Nolan Varricchio, Connor Varrichio and Hudson Fontaine each had a hit and scored a run.

The Bulldogs (9-3) are expecting a high seed, and to be playing at home, in the league tournament that starts this weekend.

The 15U team flexed its muscles on July 21, rolling over LaGrange, 22-3. The Bulldogs got a strong start from Austin Jorgensen on the mound, while Nick Albra picked up the win in relief.

The hits came in bunches, led by Derrick Heaton (3-for-5) and Jackson Atwell (3-for-3), who each drove in four runs. Jorgensen went 3-for-5 with three RBI, Ryan Smith drove in three runs and Liam Murphy went 4-for-5 with two RBI.

Beacon (20-2) finished its regular season on July 23 with a 5-2 win in Connecticut over Stamford. Anthony Borromeo picked up the win on the mound, going five innings with three strikeouts, allowing two earned runs. Heaton came on in relief and pitched two innings to earn a save.

Atwell, Heaton, Ronnie Anzovino and Jorgensen each drove in a run.

“Our pitching looked pretty good in both games,” said Coach Bob Atwell. “They were pounding the zone. Defensively, we’ve been playing pretty well — we’ve had great moments but also some miscues, so we’re looking to tighten that up.”

The Bulldogs are expected to have a top seed and play at home in the early rounds of the league playoffs.