And he brought the donnolis

Word spreads fast: Big Vinny’s is open for business on Main Street in Beacon. On a recent Sunday, the restaurant had a steady stream of hungry customers. 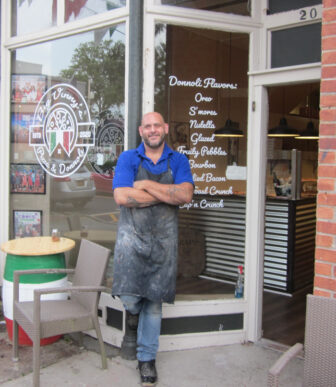 Few seemed to know about owner Vincenzo Vaccaro’s appearances on Food Network shows or his social media following. They came for the pizza, or the donnolis — a cross between a doughnut and cannoli.

“I keep telling everyone this is the best pizza in the Hudson Valley — and I’ve tried them all,” said Tom Pantano (aka Tommy Empanadas), a caterer in Beacon who was waiting in line. He said he is a daily customer, riding off the calories on his bike.

Another patron asked if Vinny’s delivers. For now, that’s an afterthought as Vaccaro and his partner, Beatriz Martinez, hustle to keep up.

The couple moved to Marlboro eight months ago to escape the city grind and because the pandemic had killed their business in Queens.

They scoured the region for the right spot. “Beacon is a little like New York City, with the sidewalk traffic and the friendly people,” Vaccaro explained. “We felt right at home here.”

Vaccaro grew up in Astoria and learned the ropes at his Sicilian father’s bakery, where he began pitching in at age 8.

He takes his craft seriously. “Even if you follow a recipe from a book, it will never come out like mine,” he said.

The secret is a sourdough-like starter made with flour, water and sugar that ferments. He keeps adding to the bottle, so a descendent of his original concoction continues to kick-start the pizza dough. He adds salt and Greek olive oil and lets the dough sit for 72 hours, which creates pockets as in ciabatta bread.

Many pizza places pop the holes by kneading the dough, he said, “but that just makes it chewy. I’m looking for a crispy texture, where you bite into it and there’s bubbles and crunching air.”

Despite his devotion to pizza, the donnolis are what have brought Big Vinny a measure of modern fame.

In 2018, a social media consultant for the restaurant challenged him to come up with “something that made me different from everyone else,” Vaccaro recalled. 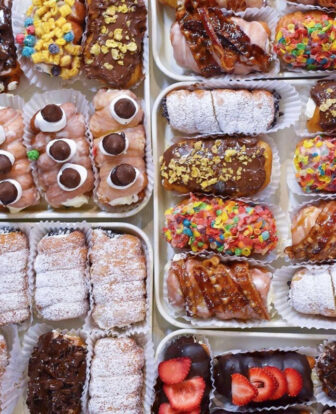 The many varieties of donnolis (Photo provided)

He often created his own cannoli cream, adding cinnamon, almond flavor or chocolate chips, so he decided to top a cannoli with doughnut glaze and candied bacon, which led him to re-imagine the concept.

Cannoli pastry shells are thin, but donnolis are fried around a dowel so they’re fluffy and can be pulled apart. Vaccaro based his creation on a treat called cartocci, made from brioche bread stuffed with cream, dusted with sugar and typically sold in Sicilian bars.

“I Americanized it and the ideas kept coming,” he said.

A donnoli resembles four or five tires standing upright. The cream can be altered with limitless varieties, as can the toppings: Photogenic donnolis come smothered in sweet sauces and can be encrusted with crumbled cookies and sugary breakfast cereal.

Once he unleashed the donnoli, first came the Instagram foodies. Then a reporter from a cable news channel in New York City. Then Thrillist, Delish and other buzzworthy online outlets. “It was pandemonium,” said Martinez. “Overnight, we had to close the door on people.”

Vaccaro, who is also a television and film actor, appeared as a guest on Food Network shows such as Holiday Baking Championship, Guy’s Big Project with chef Guy Fieri, and Girl Scout Cookie Challenge.

The next step, he said, are savory donnolis, perhaps with the hole stuffed with macaroni and cheese, bacon and caramelized onions.

But that is conjecture. For now, the order of business is pizza and donnolis. That’s it. Vinny’s doesn’t serve salads, appetizers or entrees.

“We focus on our strengths,” he said.