In 2020, while many of us kept busy baking bread or bingeing on Netflix, Donna Mikkelsen was plotting her next big project. 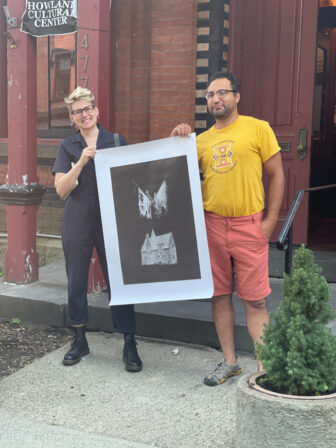 The Beacon resident, a teacher and artist, spent the better part of the pandemic shutdown studying local history. “As an educator, I started to wonder about the history of education in this city and, particularly, the free library,” she says. “How did it come to be? Was it always this way?”

Mikkelsen had impeccable timing; the library this year is focused on its history as it celebrates its 150th birthday. She and another Beacon-based artist, Jean-Marc Superville Sovak, will share their artwork inspired by the library’s history at its original location at 477 Main St. (now the Howland Cultural Center) beginning with a reception on Friday (Aug. 5).

Two years ago, Mikkelsen did her initial research online but found it challenging to navigate digital archives. “I like to see all the information in front of me at once,” she says. When the shutdown lifted, she ventured out to find more tangible sources — at the library.

There she met Michelle Rivas, the director of young adult programs (and a member of the board of Highlands Current Inc., which publishes this newspaper). The two bonded over their shared anticipation of the upcoming anniversary. 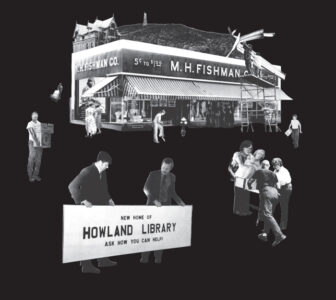 Detail from “The Big Move,” by Donna Mikkelsen

Mikkelsen read about Gen. Joseph Howland and his wife, Eliza, a nurse, who decided to commission a library for what was then known as Matteawan after returning home from the Civil War. It opened in 1872.

Mikkelsen marveled at the couple’s mission to improve their community. “They basically thought, ‘What do you do after a civil war? You build a school. You build a library.’ ”

While contemplating an exhibit, Mikkelsen connected with Sovak, a teaching artist at Dia:Beacon whose artwork is inspired by history. At the time, Sovak was exploring Indigenous stories and James F. Brown, a former slave who became the chief gardener in Fishkill Landing for the Verplanck family. “She and I both want to tell the stories that you can’t always see behind the historical photos and art,” Sovak says. 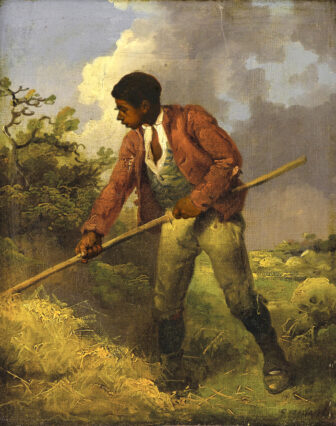 James F. Brown, in an illustration by Jean-Marc Superville Sovak

Sovak’s artwork uses letters and imagery, while Mikkelsen created pictographs, or “historical mashups,” printed on vinyl banners. They highlight three moments in the history of the library: its construction and opening in 1872; when it was opened to the public (rather than only to paying members) at the insistence of a major donor in 1929; and when it moved to its present location at 313 Main St. in 1976, with community members carrying the books down the street.

“That’s part of the reason I titled the exhibit People Make It Happen,” Mikkelsen says, noting that staff at the Beacon Historical Society and Howland Cultural Center played crucial roles in the project.

The exhibit will begin on the exact date and time the original library opened 150 years ago, “and we will be ringing the bells right at 5 p.m., just as they did on Opening Day in 1872,” Mikkelsen says.

Mikkelson will discuss her work from 3 to 5 p.m. on Aug. 13 at the Howland Cultural Center, while Sovak will be there at 1 p.m. on Aug. 20 with Myra Beth Young Armstead, author of Freedom’s Gardener: James F. Brown, Horticulture, and the Hudson Valley in Antebellum America.

A Librarian Never Forgets
Beacon History, Up Close and Personal

HOW WE REPORT
The Current is a member of The Trust Project, a consortium of news outlets that has adopted standards to allow readers to more easily assess the credibility of their journalism. Our best practices, including our verification and correction policies, can be accessed here. Have a comment? A news tip? Spot an error? Email e[email protected].