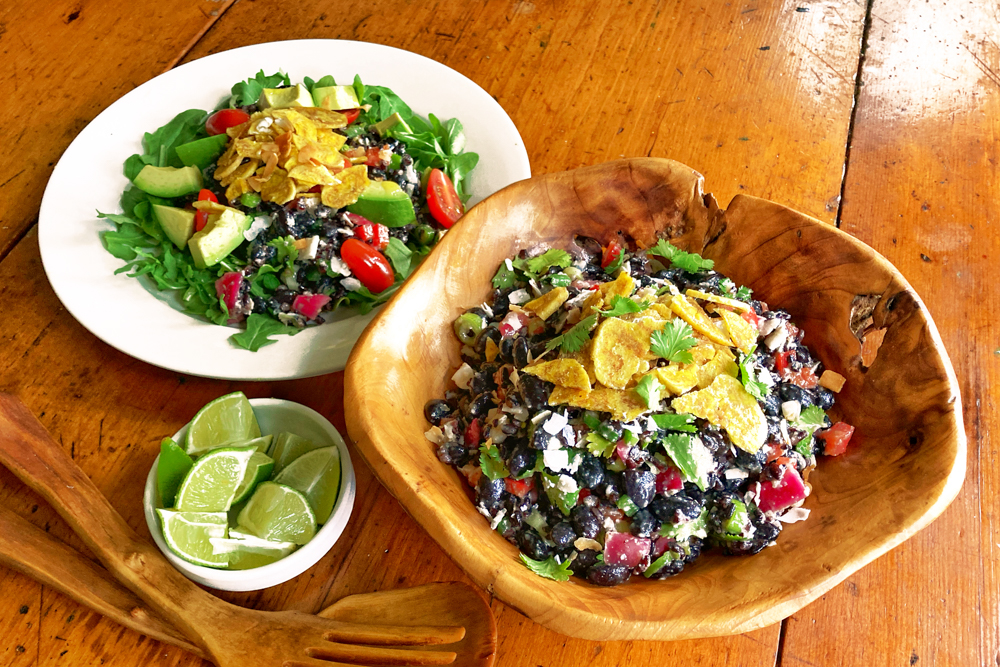 Out of curiosity, I checked: The National Geographic Society registers the average temperature of the latitudinally defined tropics as between 77 and 82 degrees.

Whether you acknowledge climate change or not, you must admit that this seems positively balmy compared to what we’ve been enduring lately and can probably expect for the next month or two — not to say years hence.

The last thing we want to do is spend much time in the kitchen over a stove or within any proximity to an oven. Thankfully, this time of year provides an abundance, and an equally abundant variety of fruits and vegetables that don’t ask much in the way of cooking.

Nor is it the season for carbohydrate-laden groaning boards — we’re usually more in the mood for grazing on small plates fashioned along the lines of cooking from (no surprise here) the global tropics — the Mediterranean, Indies East and West, Meso and South America, the Near and Far East and countries of the Pacific Rim.

I recently came across a recipe for a warm dish of black beans in coconut milk that struck a chord. It seemed either/or Caribbean/Thai, with its notes of lime, ginger and hot peppers. (Another little counterintuitive secret of tropical cooking: Sweat-inducing heat promotes superficial cooling on exposed skin.) With a little modification, it suggested this cold salad.

Being conscious of the fact that beans, while healthy and nutritious, are an incomplete protein, I added rice (or other grains) to the mix. I came across a bag of so-called “forbidden” black rice at Foodtown in Cold Spring that made an ideal addition.

And, while the salad as presented could be labeled vegetarian or vegan, I am no diet cop and suggest it would be a great companion to grilled shrimp, fish, chicken, ribs, sausage or flank steak.

The garnish — crushed plantain chips — was a suggestion salvaged from the original warm recipe and adds a salty crunch, especially when brightened with a finishing squeeze of lime. (Plantain chips can be found in the healthy-snacks aisle at Foodtown but are widely available elsewhere.)

Note: Substitute a combination of brown rice and red or black quinoa in the same measure for the black forbidden rice. Other suggested variations or additions include lightly toasting the coconut flakes for the salad (6 to 7 minutes on a sheet pan in a single layer in a 300-degree oven), ½ cup baton-sliced kohlrabi added to the ingredients or toasted chopped peanuts or cashews for garnish. You might also serve this as a dinner salad on a bed of arugula with sliced cherry tomatoes and avocado, drizzled with more lime juice and a little olive (or other) oil.

1. The day before, prepare the pickled red onions. Put diced onions in a clean 2-cup Ball jar. Heat the vinegar, sugar and salt in a small saucepan, bringing them just to a boil to dissolve the crystals. Pour the hot liquid over the onions to cover. Let cool, and refrigerate overnight. (This will be more than you need. The excess will keep up to a month refrigerated in the liquid for use in other salads or on sandwiches.)

3. To prepare the salad, combine all salad ingredients (except garnish) in a large bowl and toss gently to combine. Add dressing and toss all to coat. Serve picnic-style in a large bowl or in individual portions, garnished with crushed plantain chips and more cilantro leaves. Serve with lime wedges.