Leslie Horan Simon’s childhood was not the stuff dreams are made of.

She describes it, broadly, as traumatic. Later, in adulthood, a personal crisis nearly derailed her. Through it all, she says, she found solace in art and the natural world, both elements found in abundance in Philipstown, where she and her husband bought a home earlier this year. She grew up visiting the Highlands and is entranced: “Lizards everywhere, animals, plants, mushrooms — I lose my mind here.” 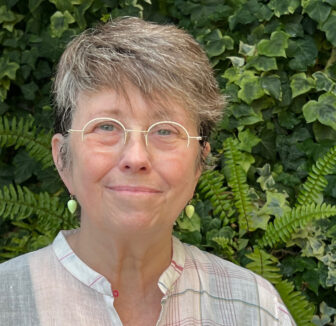 Horan Simon is an artist who works in felt. That’s her description; she is quick to note that, as someone who researches rare breeds of sheep and who has arrived at her own process of working with wool, she’s not a “felter.”

She says her childhood in White Plains and Norwalk, Connecticut, gave her the opportunity to “find the wild places” in suburbia. Her first artworks were landscape paintings; she earned a bachelor’s in fine arts at Parsons School of Design in New York City.

“For three years, right out of college, I had a decorative painting business, doing murals and finishes, sometimes with hand-painted landscapes,” she recalls. “It was the 1980s and there was a lot of money around. Although I had no connections, I was incredibly persistent, and I marched in, portfolio in hand.”

Her marriage brought with it freedom to “stop struggling for the dollar” and she returned to landscapes, mostly of the east end of Long Island. She found representation at the Fischbach Gallery in Chelsea.

“Everything came easily,” she says, until she was diagnosed with post-traumatic stress disorder related to her childhood trauma and, at the same time, became addicted to opioids. The combination “took me right off my feet,” she recalls. “I stopped painting and got into treatment.”

Fortuitously, as it turned out, there was a knitting store a block from her therapist’s office. Once Horan Simon discovered it, she became engrossed. That was seven years ago. “I started as an artist again, this time in wool,” she says. “I was sick, so knitting a sweater was all I could do. I thought, ‘What happened to me?’ I was a functioning addict. What made me shift was I got better.”

Horan Simon says she was eager to learn about spinning and weaving wool. “I loved supporting people who raise animals,” she says. “I love the people who raise sheep, especially the ones who love rare breeds, their stories, their passion. It’s natural that I would want to buy the wool from these unusual animals.”

She uses fleece from more than 70 breeds. “I have made friends with shepherds and farmers, as well as others who make it their business to gather and sell the less-popular wools for farmers who are just too busy to do it themselves,” she says. 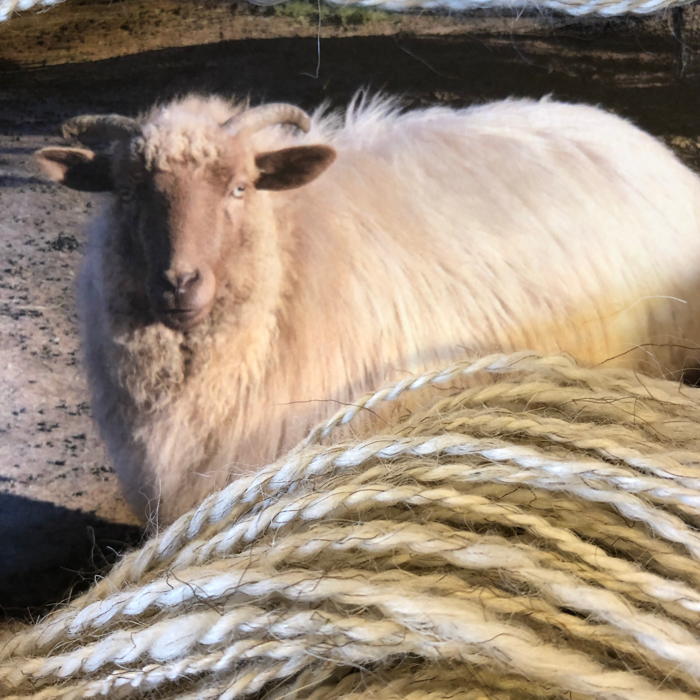 To create her artwork, “90 percent of the work is preparation, and 10 percent is composing it, putting it together, the exciting time. My process is very much like collage. I make my materials and then I compose. At night I spin wool. Right now, I’m adding a lot of leftover silks from Indian saris, mixing in other colors.

“Sometimes I weave, sometimes I knit, sometimes I use a felt loom,” she says. “When you needle felt, it’s light and airy. I embellish and appliqué sometimes, but whatever I use on it, nearly always I am working with felt I made and not a piece sourced from an old sweater.” (For videos, see lesliehoransimon.com.)

Most of her artwork is “developed in the making,” she has written. “Many are completely abstract and, to my mind, reflect a contemplative and positive energy. Others are wholly involved with pure pattern — akin to collage and quilt work — and some draw on elements from nature.

“I believe personal struggles of each artist informs their work,” she adds. “A lot of people don’t talk about this. I’m 68 and re-inventing myself. Things do change.”