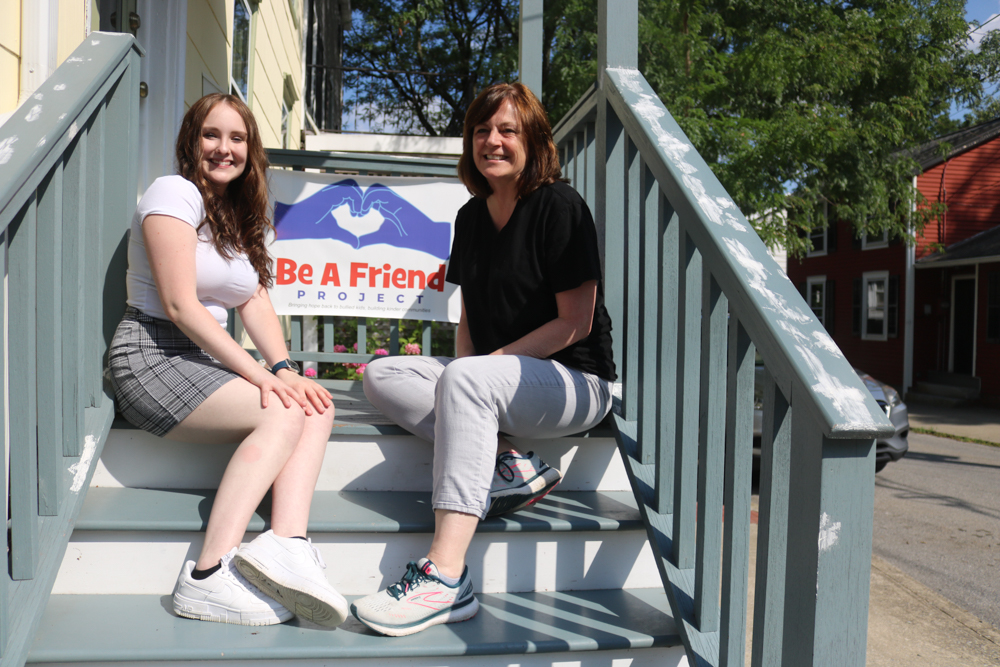 Kimmie Edge and Jennifer Young at Be A Friend's new office in Cold Spring. (Photo by M. Turton)

When Jennifer Young co-wrote an anti-bullying musical, It’s Easy, in 2015, she had no idea it would lead to the creation of an organization.

Last month, Be A Friend moved into its first office, on Kemble Avenue in Cold Spring, with Young as executive director. The project supports students who have been severely bullied — the type of relentless assaults that can lead to suicide attempts, even among elementary school students — and cultivates empathy in young people across the U.S.

“They asked what they could do,” Young recalls.

Be A Friend was incorporated in 2017 as a nonprofit. Its strategy is simple: When a parent or teacher identifies a young person who is being severely bullied, which can leave the victim feeling isolated, “with no hope, their confidence gone,” Young says, it mobilizes a letter-writing campaign to offer encouragement and support.

“Now we average at least 60 teachers and more than 2,000 kids sending letters,” said Young, a former life-skills educator for children in foster care. “Each bullying victim gets at least 1,000 letters; the record is about 2,200.” The nonprofit has distributed nearly 40,000 letters from 25 states, Canada, England and Australia.

Letters are mailed in a single batch and come as a surprise. “When our mail shows up, they feel like a celebrity, a hero,” Young says. “Their voice matters again, and they are no longer alone.”

Before the letters are sent, strict guidelines are followed, including obtaining parental consent and ensuring that both the writers and victim are identified only by first names. The writers are provided basic information, such as the recipient’s hobbies and interests, and each letter is reviewed before mailing.

So far, Be A Friend has sent mail to about 45 young people. For every one of them, the program involved at least 1,200 children and teens. Along with offering support to victims, the program is designed to “celebrate kids who do acts of kindness,” Young says. “We teach and build empathy.”

She noted that bullying can take various forms: social, cyber, verbal and physical. Be A Friend supports students in all grades, but Young says it seems to peak in middle school — sixth grade, in particular.

Kimmie Edge experienced the dark side of middle school firsthand. Now 18, she transferred to Haldane in seventh grade when the effects of bullying she encountered at another school in the region became too intense.

From being teased about acne to having false rumors spread about her, the constant bullying took its toll. “I had always been a straight-A student, but I was distraught, barely passing,” she recalls. “I was losing hair in clumps, had stomachaches, vomiting and headaches.”

The bullies, other girls in her class, had at one time been among her best friends. “Girl-on-girl bullying is among the worst,” she says. “If they get inside your head, they can destroy you mentally.”

Even though she changed schools, Edge said she still suffered from post-traumatic stress disorder, anxiety and depression from the experience.

She was not the recipient of a friend mail campaign, but at Haldane, where she became friends with Young’s son, she got involved with Be A Friend as an ambassador, writing letters. She is also a volunteer at its office and serves on its 14-member teen advisory board.

“BAF saved me; it gave me back my voice,” says Edge, who plans to study nursing at Rutgers University. “Now, I see myself as a leader and a role model, and I can do for other kids what I needed when I was being bullied.

“After everything I’ve been through, my passion is to be empathetic,” she said. “I believe I’m meant to help people.”

Young says social bullying, such as what Edge experienced, is common among middle school girls. “Bullies don’t talk to their victims, don’t sit with them, play with them or invite them to a party,” she said. “It’s exclusivity, embarrassing and humiliating.”

Aidan Duver, who lives in Dobbs Ferry, was in middle school when he portrayed a victim of bullying in a 2017 production of It’s Easy. He says he also experienced bullying himself from elementary through middle school.

“When you go through severe bullying, it’s easy to feel you’re doing something wrong,” said Duver, who serves on the teen advisory board with Edge. “The letters tell you you’re not alone, you aren’t doing anything wrong and it’s not your fault.”

He has views on why middle school is fertile ground for bullying. “Stepping up from elementary school gives students more freedom, a little power to change their role in the social hierarchy,” he said. “That often teaches them that to be popular, it’s effective to pick on others, the easy targets.”

Young says that the teenagers involved with Be A Friend are “a big part of running the organization. And they are adamant that it stays for kids, by kids.”