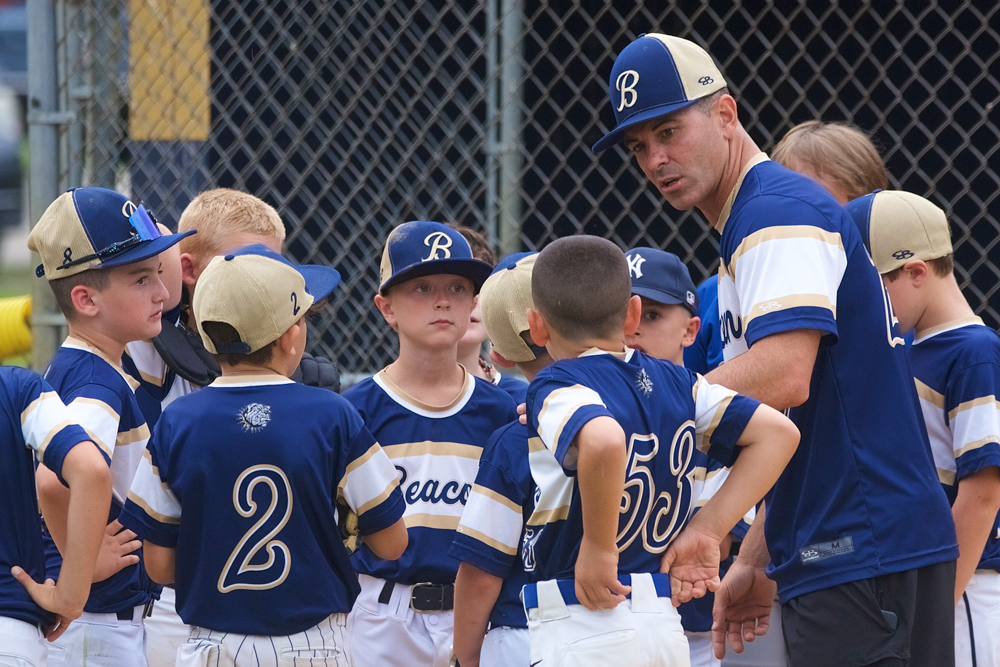 Coach Tom Virgadamo and the 9U Bulldogs ended their summer season with a playoff loss to Shrub Oak. (Photos by S. Pearlman)

The end came earlier than expected for the summer travel team for players ages 15 and younger (15U), as the top-seeded Bulldogs fell, 5-3, on Monday (Aug. 1) to No. 9 Fairfield County in their first game of the Greater Hudson Valley Baseball League tournament at Beacon High School.

The Bulldogs, who finished the regular season at 20-2, pushed home a run in the third and added two in the sixth. But the Connecticut visitors never trailed, scoring two runs in the third, two in the fourth and one in the seventh.

Beacon easily swept a doubleheader (12-3, 9-4) against Fairfield during the regular season.

“You’re only as good as your last performance,” said Coach Bob Atwell. “We hit well all year but were held to six hits. And Fairfield did a good job with two big, two-out hits [that scored runs]. We left too many men on base,” stranding nine.

Austin Jorgensen started on the mound and went three-plus innings; Anthony Borromeo pitched in relief and Derrick Heaton closed it out.

On offense, Mikey Fontaine doubled and drove in a run, and Mercer Jordan had an RBI. 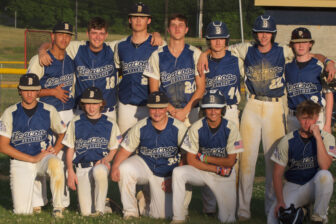 Beacon’s 15U Bulldogs received a bye in the first round of the playoffs but lost in the quarterfinals.

Atwell said his offense never was able to find a rhythm, and — uncharacteristically — didn’t get timely hits. A nine-day layoff before the tournament may not have helped. “The guys are disappointed; the goal was to win a title,” he said. “Unfortunately, we just did not get it done.”

Nevertheless, “these guys had a great summer,” he added. “They’ve improved significantly, and hopefully that will help us in our upcoming tournaments and in the fall league.”

The 12U team’s season come to an end on Wednesday (Aug. 3) in Connecticut, where the Bulldogs dropped a 4-0 decision to top-seeded New Milford in the league playoffs.

“Their pitchers threw a lot of strikes,” said Coach Ryan Koval, whose team finished 11-4. “We made a lot of good contact and put the ball in play, but we hit it at people. We just didn’t get the bounces; sometimes that’s how baseball goes.”

Naim Dika started the game on the mound for Beacon and went 42/3 innings, striking out five and giving up two runs. Nolan Varricchio pitched in relief and also gave up two runs. Beacon managed only one hit, a single by Dika.

“After the first inning, I thought Naim settled in,” Koval said. “He didn’t have his best stuff, but we didn’t give him much support.” 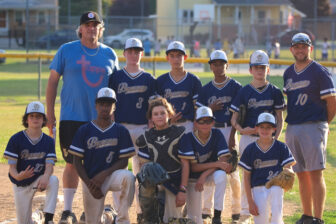 Coaches Jed Varricchio (left) and Ryan Koval (right) and their 12U Bulldogs ended the summer with a playoff loss to the top seed, New Milford.

Koval said he was proud of the team’s play during its summer run. “This is the first time they’ve had a winning season,” he noted. “They bought into the concept of ‘What can you do to help the team?’ If you contribute in some way, good things will happen.”

The score was tied, 3-3, at Memorial Park going into the final inning. That’s when things went south for the Bulldogs, with Shrub Oak scoring six times. Beacon answered with two runs in the bottom of the sixth, but it wasn’t enough.

“Their pitcher looked great,” said Coach Tom Virgadamo. “He kept us off-balance all game and hit his spots well. We couldn’t get anything going against him.”

“The guys had a great summer playing baseball,” Virgadamo said. “They bonded well, and I can see that they’ve improved. But they were disappointed; they were hoping for a nice playoff run.”