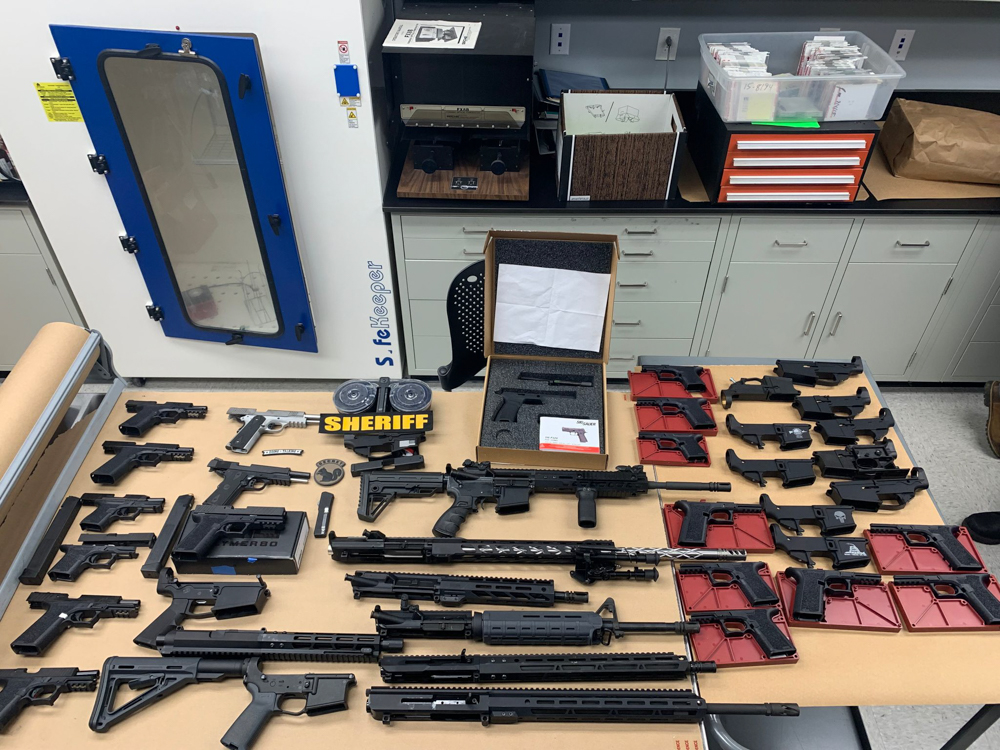 The Putnam County Sheriff's Department said it seized this arsenal of weapons and parts from a home in Mahopac. (PCSD)

The target lived, ironically, on Bullet Hole Road in Mahopac.

There, during a December raid, Putnam County sheriff’s deputies capped a months-long investigation into illegal firearms by seizing 10 pistols, an assault rifle and 67 large-capacity ammunition magazines.

Just one gun had a serial number. Deputies also seized the tools and parts to make 20 more weapons.

David Goldberg Jr., 24, was arrested, one of 11 men detained that day on gun charges in Putnam and Westchester counties, including three in Carmel.

The parts are central to a recent lawsuit filed by the state Attorney General’s Office against 10 distributors accused of illegally selling parts used to make “ghost guns,” or assembled weapons that don’t have serial numbers. The parts can also be bought without a required background check, making them accessible to people barred from buying and possessing firearms.

Initially filed on June 29 in state court, and citing the arrests of Goldberg and two other Putnam County residents, the lawsuit was moved July 18 to federal court in White Plains. It describes how firms that make gun parts seek to evade federal regulations governing frames and receivers, the housing used to create handguns and rifles, by claiming they are “unfinished.”

But buyers need only to drill a few holes or file parts of the housing to make it ready to accept a firing mechanism, barrel, trigger and other pieces to create an assault rifle or handgun. One company named in the lawsuit, Blackhawk Manufacturing Group (aka 80 Percent Arms), of Encino, California, boasts that buyers will find it “ridiculously easy” to alter the frame, a process it said should take no more than an hour, according to the lawsuit.

This kit, which was offered for sale online by a New York dealer, includes an unfinished frame and other parts (including drill bits) to make an untraceable gun.

The state’s law enforcement agencies have seized 3,166 guns overall this year, compared to 2,181 at the same point last year, said state police during a press conference on Thursday (Aug. 4) with Gov. Kathy Hochul. Ghost guns account for about 9 percent of the weapons seized in New York state, but only four years ago they were less than 1 percent.

The state police said the 795 ghost guns it has seized this year are more than double the amount at the same point last year.

“Ghost guns present a growing problem for members of law enforcement and the public as they are un-serialized, therefore untraceable, and used throughout the country to commit crimes at an exponential rate,” said Putnam Sheriff Kevin McConville on Wednesday (Aug. 3).

Two state laws that went into effect in April prohibit the possession of frames and receivers by anyone except a dealer or licensed gunsmith (who must add serial numbers) and bans the sale of ghost guns.

On June 1, the attorney general’s office sent cease-and-desist letters to 28 firearms sellers in New York state, including four in the Hudson Valley, that were selling unfinished frames, receivers or kits online or at gun shows. 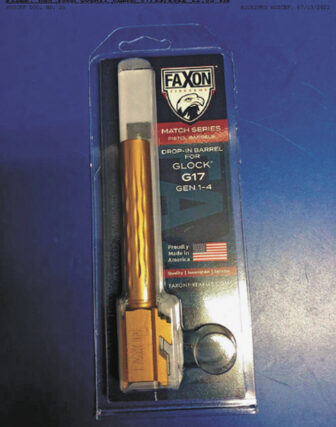 This “drop-in” barrel to create an illegal Glock G17 knockoff was purchased online by undercover agents.

Brownells sent at least 40,682 shipments to New York addresses during the last five years, according to court documents; Rainier Arms at least 5,903 beginning in August 2013; and Arm or Ally at least 466 since January 2021.

Arm and Ally and G.S. Performance are accused of mailing gun parts to Goldberg and Andrew Lopez, 36, of Carmel. Goldberg also bought parts from KM Tactical, according to the lawsuit. Goldberg was charged with four counts and Lopez with one.

Two other companies, Primary Arms and Rainier Arms, are accused of selling illegal gun parts to Adam DiMaggio, 43, of Carmel, who was arrested by FBI agents and Putnam deputies.

After detaining DiMaggio, who is being prosecuted in federal court, officers said they found two assault rifles assembled from parts, as well as five other rifles and dozens of boxes of ammunition. By law, DiMaggio is barred from possessing weapons because of a felony marijuana conviction in Arizona, according to the complaint filed by prosecutors.

He pleaded guilty in May to illegally possessing a firearm and is scheduled to be sentenced on Aug. 24. Goldberg and Lopez’s cases are being prosecuted in Putnam County. Jacob Rockover, 22, of Carmel, also was arrested and charged with four counts (including possessing an illegal assault rifle), along with a man from New Rochelle, another from Harrison, two from Yorktown and three from New Castle.

Putnam County deputies this year made two other arrests for ghost guns — a 36-year-old Southeast man with two felony convictions found on April 26 with an assembled pistol along with a shotgun; and a 33-year-old Mahopac man with a felony robbery conviction found on March 11 with three firearms, including one made from assembled parts.

In addition to the arrests, investigators from the Attorney General’s Office and New York City said they completed undercover purchases of parts from some of the companies.

Executives with three of the companies — Brownells, Primary Arms and Salvo Technologies — said on July 19 that they would stop shipping parts to buyers with New York addresses while the court considers a motion for a preliminary injunction filed by the attorney general.

The federal Bureau of Alcohol, Tobacco, Firearms and Explosives is also taking action. The agency approved a regulation that takes effect Aug. 22 clarifying the definition of frames and receivers to include ones that are “partially complete, disassembled or nonfunctional” and “designed to or may readily be completed, assembled, restored or otherwise converted to function as a frame or receiver.”