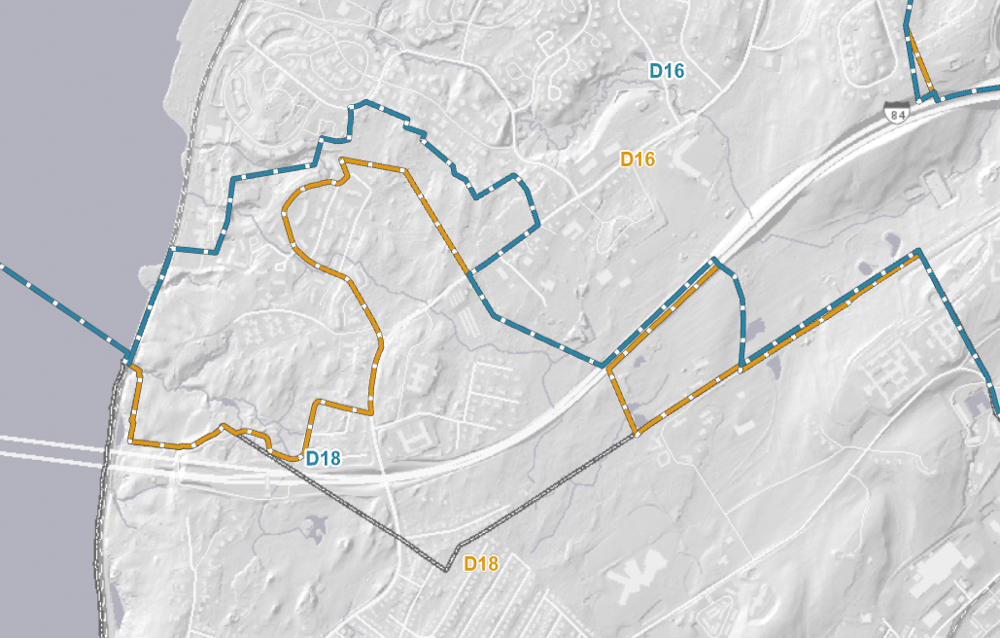 The orange line represents the current northern border of District 18 within Beacon, and the blue line is the border that takes effect in 2023.

The boundaries of the two Dutchess County legislative districts that include Beacon will remain largely unchanged under a plan recently adopted by an independent commission.

Most of Beacon will remain in District 18 under the plan approved in June by the county’s Independent Reapportionment Commission. The seven-member body was created two years ago to reconfigure the 25 districts based on 2020 census data so that each legislator has roughly the same number of constituents.

The county population did not change significantly between 2010 and 2020 at just under 300,000, but the numbers shifted within the cities, towns and villages. Each legislator represents about 12,000 people.

As in the past, District 18 includes neighborhoods in the west, north and east, as well as a section of the Town of Fishkill along Route 9D, just north of the Interstate 84 interchange. But the newly adopted map will add new areas, including Mount Gulian and the Hudson View Apartments.

The remainder of Beacon — a swath that includes its southwest neighborhoods on both sides of Fishkill Creek — will remain in District 16, which is mostly the Town of Fishkill.

Residents can type their address into a map at gis.dutchessny.gov/irc-plan-2022 to determine their districts.

Both District 16 and 18 are represented by Democrats. Last year, Nick Page was elected to his third term in District 18 and Yvette Valdes Smith, who is the minority leader, was elected in District 16. The next legislative election will be held in 2023 using the new boundaries.

The adopted boundaries represent a reversal from a draft map released in April. In that version, District 16 would have encircled Beacon’s eastern neighborhoods and parts of the city’s north and southeast, an area predominantly within Beacon’s Ward 3. District 18 would have gained all or most of Ward 4.

County legislators must live in the districts they serve. As a result, the redrawn boundaries will shift three Republican legislators — if they run again — into districts already represented by members of the party. Republicans hold 16 of the Legislature’s seats and Democrats, eight. The other seat is held by a Conservative Party member.

“Nobody ever had an intent, or a purpose, to put multiple incumbents into one district,” said Christian Cullen, chief assistant county attorney and counsel for the commission, in June. “But that’s what’s going to be the allegation.”

Among Democrats, the map will flip two incumbents if they decide to run because their homes would move from one district to another.

An analysis of the map by Joshua Simons, a researcher at SUNY New Paltz who assisted the commission, concluded that it meets federal, state and local requirements for redistricting.

If no one successfully sues to change the boundaries, the map will become the first created by the Independent Reapportionment Commission, which was formed in 2020 following a countywide referendum approved by 65 percent of voters.

Its seven members include two members appointed by Republican leaders and two by Democrats. Those four members selected the others.

Its work has been delayed twice — by the later-than-usual release of the 2020 census data and by the disbanding of the original commission last summer after a Democrat appointee was found to be a school board member. That violated a prohibition on elected officials, according to the Republican majority in the Legislature, although the Democrats argued it did not.