Joshua Laird, executive director of the Palisades Interstate Park Commission, stood outside its headquarters at Bear Mountain on Monday (Aug. 8) and watched a rising plume of smoke. 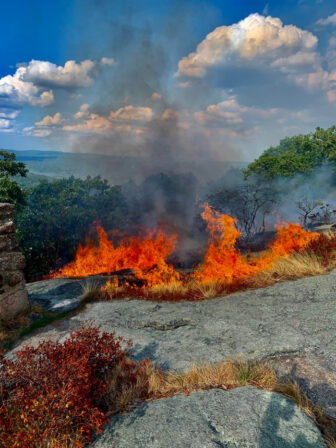 A brush fire damaged 5 acres at Bear Mountain, where a lack of rainfall has left dry conditions. (Photo via Fort Montgomery Fire District)

By Wednesday, after burning through 5 acres, the fire had been contained but not extinguished as rangers continued to douse the area with water and watch for flare-ups, said Laird. They were battling not just the flames, but an abundance of fuel left by this summer’s dry weather.

“Even the smallest spark, whether it was somebody’s cigarette, or the sun bouncing off a mirror, could have started it in these types of conditions,” he said. “It’s a pretty scary sight.”

What last summer gave in abundance, this one taketh away.

The Highlands in 2021 had its rainiest July, August and September in three years, keeping lawns and hillsides green well into the fall. But this summer is a brownout, the product of a combination of drought and the third-warmest July on record.

Rainfall in Beacon and Cold Spring, which had their last big storm on July 19, is 6 to 8 inches below normal for the year, according to the National Weather Service.

Both Dutchess and Putnam counties were downgraded last week by the National Integrated Drought Information System from “abnormally dry” to experiencing “moderate drought.”

On Thursday (Aug. 10), the agency upgraded conditions for the Highlands from moderate to severe drought.

The NIDIS, which updates conditions for states and localities each Thursday, said a severe drought affects the yields and sizes of fruit crops, and means farmers may have to start feeding cattle and governments may have to issue warnings about burning outdoors.

In addition, the National Oceanic and Atmospheric Administration said on Monday that temperatures nationally averaged 76.4 degrees last month, 2.8 degrees above normal and only cooler than two other Julys, 1936 and 2012.

The parchedness is causing a small change at the Glynwood Center for Regional Food and Farming in Philipstown, said Laura Lengnick, its director of agriculture.

An irrigation system and soils primed to capture and store the scant amount of rain that has fallen have protected the vegetable harvest, she said. The livestock are also doing well, but hay must be used to compensate for the reduced growth in the pastures where the cattle and sheep usually graze.

“We are also preparing to take them out of the pastures completely to give the grass more time to grow in hopes that we will be able to graze again in the fall,” she said.

Irrigation also feeds the plants at Hudson River Hemp in Hopewell Junction, one of more than 200 hemp farms awarded the first licenses to grow recreational marijuana for the state’s legal market. The company is preparing to harvest its first plants on Saturday (Aug. 13).

Hudson River Hemp, which has a second location in Wappingers Falls, pulls water from an irrigation pond fed by springs and a nearby stream, said Ryan McGrath, the company’s managing member. But the dry weather is better in general for marijuana plants because it’s easier to feed them extra water than to combat the root and bud rot, mold and other conditions caused by an overabundance of rain.

“The hot and humid conditions are more worrisome,” he said.

Conditions were exactly that on Monday, when temperature reached 96 degrees as rangers with Bear Mountain State Park and the state Department of Environmental Conservation responded to the brush fire, along with firefighters from Fort Montgomery.

As of Wednesday, Perkins Memorial Drive and surrounding hiking trails were closed. A second fire that broke out Monday near the Jackie Jones firetower in Harriman State Park burned about 3 acres before being contained, said Laird.

At Bear Mountain, the rapid response from Fort Montgomery and the rangers kept the fire from doing more damage, he said.

“We had a lot of concern about the fire jumping whatever lines we were setting,” he said. “It grew, but they did manage to contain it.”