New York officials lobbied Congress and the Biden administration to include a $15 billion bailout of the Metropolitan Transportation Authority in the American Rescue Plan, a $1.9 trillion pandemic spending bill enacted in March 2021.

But the transportation agency’s situation has worsened since then.

Ridership on the MTA’s buses and subways, and its Long Island Rail Road and Metro-North commuter trains, will rebound at a lower level than previously predicted, according to updated projections through 2026 presented to the MTA board when it met on July 27. 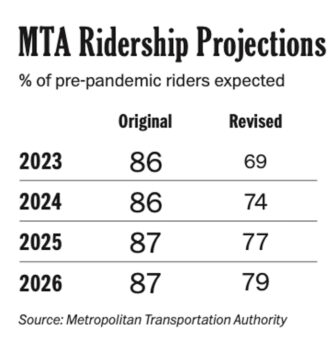 Metro-North, which set a ridership record in 2019, on Tuesday (Aug. 9) drew just 58 percent of the riders it would have averaged on a similar day before the pandemic. The Hudson Line, which includes stops at Garrison, Cold Spring and Beacon, as well as Breakneck, has seen an increase of 83 percent this year over the first six months of last year, from about 2.4 million to 4.4 million riders, although that is still far lower than the 8.5 million year riders in the first six months of 2019.

One of the chief factors continuing to depress ridership has been the transition to remote work that began when then-Gov. Andrew Cuomo ordered businesses to close their offices to prevent the spread of COVID-19 at the beginning of the pandemic, said Kevin Willens, chief financial officer for the MTA.

The MTA said that a survey of 160 employers in May showed just 8 percent of workers have returned to offices in Manhattan five days a week; that 28 percent are still working remotely full-time; and that 78 percent of workplaces allow employees to split their time between the office and home.

Not only are people commuting less, but they are taking fewer non-work-related rides on public transportation and continue to have concerns about infection risks and crime, said the MTA.

The MTA has been using the “midpoint” of three scenarios for ridership provided by a consultant, McKinsey & Company. Under those projections, systemwide ridership was expected this year to reach 77 percent of pre-pandemic levels. Instead, it stands at 61 percent, said Willens. Ridership increased for most of 2021 but plummeted when the highly infectious Omicron variant of the virus that causes COVID-19 emerged in December, fueling record highs in cases.

“I don’t know if we’re going to get to even the numbers in McKinsey’s revised [ridership] assessment because most of the things are not in our control,” said Neal Zuckerman, a Garrison resident who represents Putnam County on the board and is chair of its finance committee.

Despite low ridership, buses and subways are running at 100 percent of pre-pandemic schedules; the Long Island Rail Road at 88 percent; and Metro-North at 89 percent, according to the MTA.

In terms of expenses, the MTA has a structural problem, said Zuckerman. Its costs are largely fixed, even when service was cut during the early months of the pandemic and revenues fell, he said.

“Ultimately we have a question,” he said. “If the service stays where it is, who’s going to pay?”

Along with ridership figures, McKinsey lowered its projected revenue for the MTA from fares between 2023 and 2026, further widening deficits that had been projected to range from $1.4 billion to $2.2 billion annually through 2026. They are now expected to be at least $2.5 billion annually.

The federal bailout, which the MTA is using to eliminate deficits that begin in 2020, will be largely exhausted after 2024 instead of 2025, Willens said.

The MTA is working on a “congestion pricing” plan that would raise $15 billion for capital projects by charging a toll to vehicles entering a section of Manhattan from 60th Street to the south, excluding FDR Drive and the West Side Highway. The agency estimates that it would charge drivers with an EZPass between $9 and $23 during peak hours, and those billed by mail, $14 to $35.

“New dedicated funding is necessary under all the scenarios to avoid the alternatives we don’t want, which would be large fare increases, service cuts and layoffs,” said Willens.