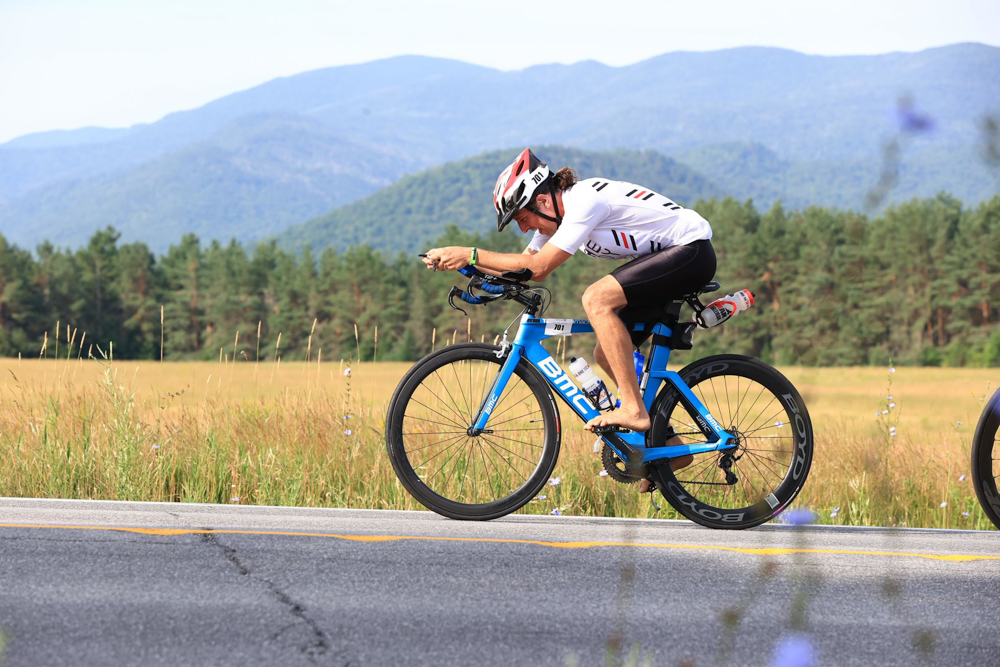 Completing a triathlon is hard.

Completing the Lake Placid Ironman Triathlon — a 2.1-mile swim in Mirror Lake followed by a 112-mile bike ride through the Adirondacks before winding things down with a marathon — is harder.

Guy Felixbrodt, who lives in Beacon, took it a step further last month when he did it barefoot, the first person to accomplish the feat. It took 16 hours and 49 minutes. 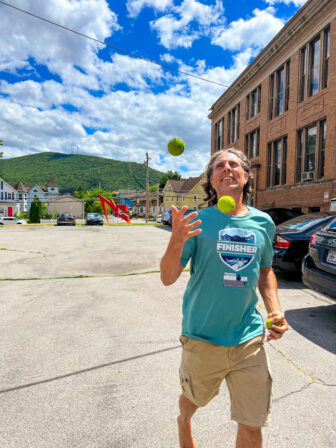 Felixbrodt, a Beacon resident, juggled throughout the 13.1-mile running segment of one Ironman. (Photo by Brian PJ Cronin)

It’s actually his second record. A few years ago, at the Half Ironman World Championships in South Africa, he juggled during the entire 13.1-mile run. The forward motion makes juggling easier, not harder, he says. “What I couldn’t make up in speed, I made up in skill.”

Modern barefoot running came into vogue in 2009 with the publication of Christopher McDougall’s Born to Run, which suggests that “running shoes may be the most destructive force to ever hit the human foot.” The theory is that today’s over-cushioned shoes weaken our feet by causing them to over-pronate, leading to a host of injuries and misfortunes.

Although he’s read Born to Run and agrees with its premise, Felixbrodt lost his shoes by a different path: A YouTube video that introduced him to the concept of “Earthing.”

The earth, says Felixbrodt, thrums with energy from the stratosphere, deposited via constant lighting strikes. “We’re basically walking on charged — some call it sacred — ground,” he says. “And then we do the most dangerous thing possible: We insulate ourselves from it. We have rubber-soled shoes, rubber-soled sandals, flip-flops, all of it disconnecting us from the earth.” Walking barefoot “grounds” a person, connecting the body to the earth’s electrons, he says.

“I’m a person who likes to think differently,” Felixbrodt says.

Felixbrodt became involved in triathlons because he was going to donate stem cells to a stranger and felt he had to get in shape. “I wanted to give him the creme de la creme of stem cells,” he says.

After switching to barefoot running, he says the aches and pains in his feet faded away and he was able to recover more quickly between runs. He also ditched his biking shoes and bought grounding wires at AutoZone to turn his bike into an “Earthing-Cycle.”

Guy Felixbrodt isn’t the only local notable when it comes to the Ironman. Father Dan Callahan of the Franciscan Friars of the Atonement at Graymoor in Garrison has been competing in the events for 25 years, earning him the nickname the “Iron Friar” and helping to raise more than $350,000 for charities.

In June, the 71-year-old finished second in his age group in the Tupper Lake Tinman Triathlon and on July 24, in what he said would be his last race, competed at the Lake Placid triathlon for the 24th time, finishing in just under 17 hours.

“I don’t compete, I complete!” Callahan said in an interview posted on the friars’ website. “That’s the strategy.”

Felixbrodt’s feet are not, in fact, indestructible. He prefers not to run on sharp gravel and he wears shoes in the winter while walking his dog. But he says if he tries to run in shoes now, he trips. So he goes barefoot pretty much everywhere, helpfully explaining to people in grocery stores who report him to the manager that there is no state health code that prohibits it. 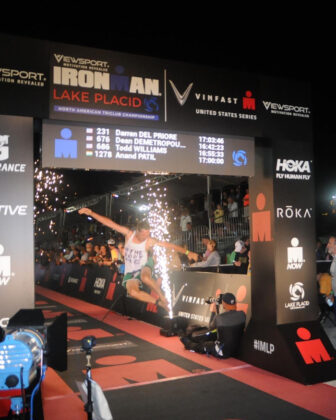 Besides, he asks, what’s unsanitary about feet? “Am I going to go into the grocery store and pick up the cucumbers with my feet?” he asks. “Yet people shove their hands in there, and who knows where their hands have been?”

When Felixbrodt took his barefoot gospel to the Adirondacks, some competitors told him he was crazy. He says he responded that it was an inherently crazy event. To those who were intrigued, he explained that going barefoot would allow them to discharge the energy their body was generating, instead of feeding it back into their muscles, wearing them down. “You’re improving your fitness but ruining your body,” he argued.

With the race behind him, Felixbrodt is ready to hit the road. He’ll soon be leaving with his dog to travel around the country in a trailer and launch a business as a physical consultant known as The Body MC. He’s looking forward to traveling long distances without worrying about cutoff times that might disqualify him.

One thought on “Feet of Iron”