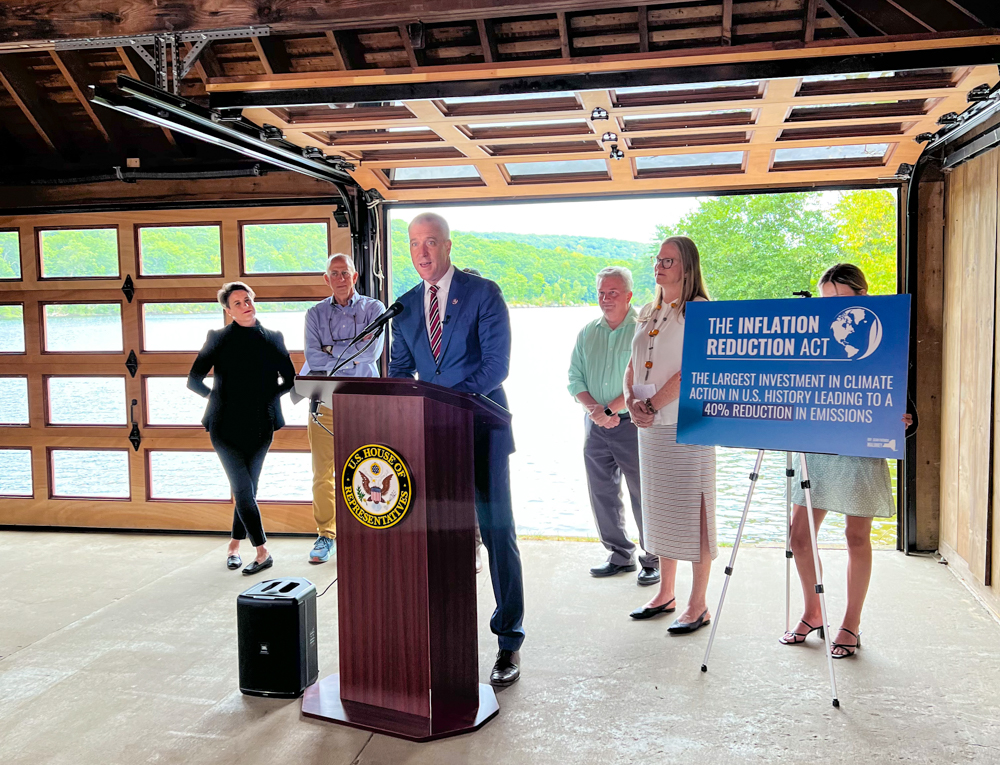 Rep. Sean Patrick Maloney spoke at the Glynwood Center on Wednesday about the passage of the Inflation Reduction Act. (Photo by B. Cronin)

The sprawling bill includes provisions that will strengthen the Affordable Care Act while allowing Medicare to negotiate prescription drug prices and add agents at the Internal Revenue Service. Most notably, it allocates $385 billion to fight global warming, the first time Congress has passed a climate change bill since first being informed of its existence 34 years ago.

The bill is projected to reduce America’s greenhouse gas emissions by 40 percent of its 2005 levels over the next 10 years through clean-energy tax credits, rebates for consumers on such green technology as electric vehicles and heat pumps, the funding of a “green bank” to invest in new technologies and penalties for companies that fail to reduce methane emissions.

At the news conference, held at the Glynwood Center for Regional Food and Farming in Philipstown, local environmental leaders highlighted the ways in which climate change is affecting the Hudson Valley.

“We’ve seen the impacts of ‘once-in-a-lifetime’ flooding, such as Hurricanes Irene and Sandy, much more frequently than that ‘once-in-a-lifetime’ name would lead us to believe,” said Katrina Shindledecker, executive director of the Hudson Highlands Land Trust. “And it seems rain is now either bust or boom.”

Tracy Brown, the president of Riverkeeper, noted that the warming of the Hudson River is having a detrimental effect on its native species, as is the increased pollution flowing into the river from runoff caused by more powerful storms. In addition, rising sea levels threaten to push the salt front — the line between saltwater and freshwater that usually resides in the Highlands — further north, threatening the upriver communities that draw their drinking water from the Hudson.

“We’re seeing impacts coming faster than what was predicted in many of the models,” she said.

Doug Ohlandt of the Dutchess Land Conservancy highlighted the billions of dollars in the bill that will help farmers make their land more sustainable through regenerative agriculture, as well as conservation easements that will make it easier for them to shield their land from development.

“What the passage of this bill provides more than anything else, though, is hope,” he said. “Hope for fresh food provided by local farmers. Hope for clean rivers and streams and cool clear water, hope for unpolluted skies and unspoiled air.”

Should the Democrats maintain control of Congress in the November midterm elections, Maloney said he would keep pushing for environmental reforms. “Our work will not be finished until we’ve got a zero emission economy that is more prosperous and more affordable than the one we have today,” he said.

The bill passed along party lines. In order to be in Washington D.C. to vote on the bill, Maloney missed a primary election forum organized by 21 environmental groups. Maloney is facing a challenge on Tuesday (Aug. 23) for the Democratic line from state Sen. Alessandra Biaggi.

Maloney sent a minute-long video statement, but Biaggi was alone answering questions. She highlighted her work in passing the 2019 Climate Leadership and Community Protection Act (CLCPA) that, among other goals, requires New York State to get 70 percent of its power from renewable sources by 2030, reach zero-emissions electricity by 2040, and net-zero greenhouse gas emissions by 2050.

Biaggi called it “the strongest piece of climate justice legislation in the entire country on the state level.” She also noted that the legislation was the Department of Environmental Conservation’s justification for denying the expansion of the Danskammer natural gas plant on the Hudson River north of Beacon, because the agency determined the plant would not be in compliance with the CLCPA.

“That’s exactly what we want to see, that the bill that we passed, which was intended to do things like this, is actually working,” she said.

She has pledged not to accept campaign donations from fossil-fuel companies, something she said Maloney has not done, and she accused him of supporting the Danskammer project.

“I am in a campaign with someone who behind the scenes was really trying to not only allow for this to happen,” but supported the plant, she said. “That is a distinguishing factor between myself and my opponent.”

Biaggi said that, if elected, she would advocate to be included on the task force overseeing the decommissioning of the Indian Point nuclear power plant. The panel does not include any federal elected officials, although staff members from the offices of Sens. Charles Schumer and Kirsten Gillibrand take part.

“I am keen on using the power of hearings to ask challenging questions that get right to the heart of what the issue is, or what the problem is when it comes to the people in charge of these agencies,” she said. “And I would love to be able to do that as it relates to Holtec.”