It felt a little reckless, to be honest. The recent heat wave has left me wary — “once bitten, twice shy,” as the saying goes. And summer’s teeth seem only to be getting sharper with each passing year. 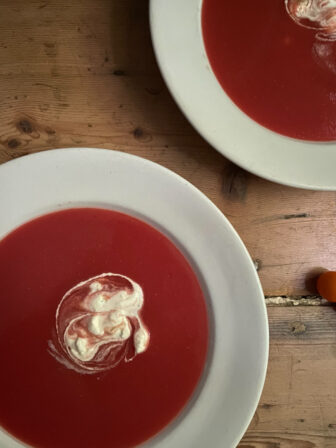 I was surprised at how quickly I worked through every no-cook dinner in my repertoire during that string of 90-something days; surprised to realize how many of my summer standbys — corn on the cob, potato salad, egg salad, BLTs — require actual cooking to become edible. I was not about to cook. Yet serving smoothies for supper night after night felt like a cop-out, so tomatoes quickly became the staple of our heat-wave diet.

Tomatoes have long been the superstars of high summer. They thrive in hot weather, embody sunshine and taste delicious raw. Best of all, it turns out that the most delicious way to serve them requires zero cooking, just a generous supply of basil, olive oil and mozzarella, along with some crusty bread.

Indeed, for the past few decades, I have taken on faith that tomato season requires a constant supply of these ingredients.

But as I sliced my way through the fourth or fifth mozzarella ball, I grew a bit weary. And that’s when a buried memory nudged its way to the surface. As a child, I’d eaten tomatoes almost exclusively with dill. My mother, being Scandinavian, adored dill, so naturally she was going to lavish it upon the gorgeous, crimson tomatoes she grew in our garden. On good nights, she’d also smear them with little dabs of mayonnaise.

So linked were tomatoes and dill in my mind that, even after I moved to Manhattan, it took me many summers to realize that the local fad for tomatoes with basil wasn’t just some one-off novelty. (I was likewise surprised to hear New Yorkers going on and on about Jersey tomatoes, because everyone knows that Indiana tomatoes are the best, duh. But evidently this truth hadn’t reached the East Coast yet.)

Once I realized that the tomato-basil pairing was in fact an international institution, I didn’t just add it to my repertoire. I superimposed it over all my tomato memories, burying the tomato salad of my childhood as if it was some hayseed eccentricity.

Until last week, that is, when I found myself craving tomatoes with dill.

I cast aside the ball of mozzarella, minced dill and scallion, and mixed it into goat cheese along with a little olive oil. I then spread that on our tomato sandwiches. Goodness, I thought, where’ve you been hiding?

A few days later, I made a cold tomato soup, and quickly realized the same goat cheese-dill-scallion mixture would make a terrific dollop. Even Dosi, a tomato skeptic, agreed. And so this recipe was born — out of blistering heat and forgotten summers, plus a yen for suppers prepared in a blender.

Note: This is a great way to use blemished tomatoes. Because different tomatoes vary in their sweet-acid balance, adjust the agave or sugar and vinegar to taste.

In a large bowl, combine all the ingredients except for the tomatoes. Toss well to combine. Slice or chop the tomatoes, and add to the bowl. Toss again, and set aside to marinate for at least 15 minutes, and up to one hour, tossing regularly.

Transfer the tomato mixture to a blender. Blend for 20 to 30 seconds, or until thoroughly pulverized. Add the water and blend again.

Pass through a strainer set over a bowl, pressing down on the skins and seeds to squeeze out all the juices. Discard any solids left in the strainer. Taste and adjust for salt and acidity. Transfer to the refrigerator and chill until quite cold, at least two hours. Meanwhile, make the dilled goat cheese.

Serve cold, in cups or bowls, topped with a dollop of dilled goat cheese.

Leftovers can be used to make tomato sandwiches.

In a medium bowl, whisk the cream or crème fraiche until slightly thickened. Crumble the goat cheese into the bowl and mix well to combine. Add the minced scallion and dill, the olive oil and salt and pepper. Taste and adjust for seasoning. Transfer to the refrigerator until ready to serve.