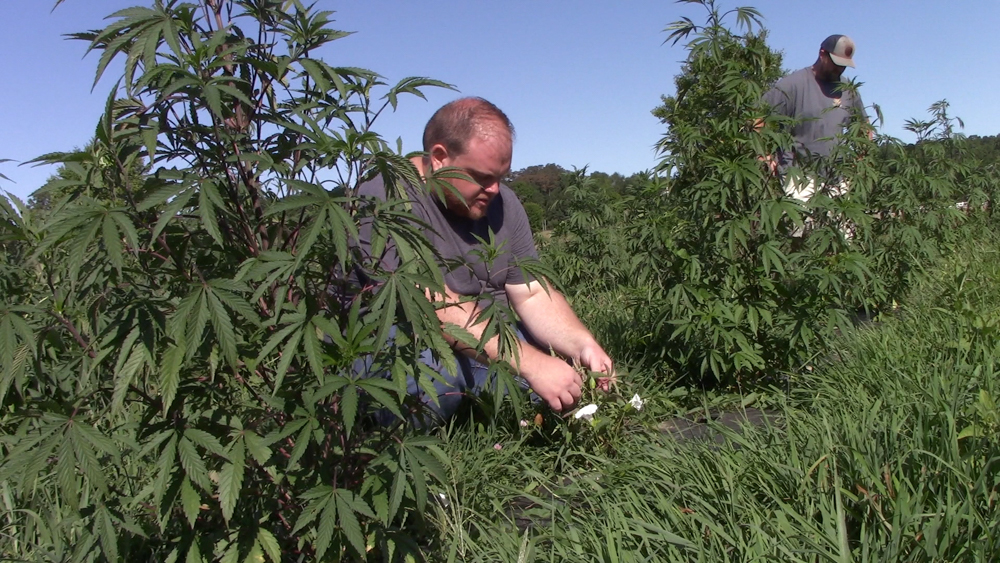 Alex Keenan and Ryan McGrath in the field (Photos by L. Sparks)

Two miles from the Taconic State Parkway, a narrow road of homes set in recesses carved out of the woods leads to a 280-acre farm called Mystic Meadows.

For a quarter century, Ryan McGrath and his family have boarded horses and cut hay at the Hopewell Junction farm. Today, three years after McGrath and several partners began growing hemp to feed a demand for oils, lotions and other products made with cannabidiol, a compound in the plant, they are pioneers again with the state’s latest cash crop: marijuana.

On Aug. 13, a crew of workers holding scissors snipped away at the first plants harvested by Hudson River Hemp, a company McGrath owns with Alex Keenan and three other partners. The air carried the sound of music from a radio and the aroma of marijuana. 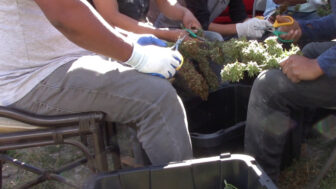 As early as the end of the year, buds from those plants will be available for purchase in New York’s first marijuana retail stores, a milestone for a fledgling industry born on March 31, 2021, when then-Gov. Andrew Cuomo signed the Marihuana Regulation & Taxation Act.

His signature made it legal for adults 21 and older to possess up to 3 ounces of marijuana for recreational use and keep up to 5 pounds in their residences. It also established a system of farms, processors and retail shops to supply smokers as well as consumers of oils, tinctures, edibles and other products made with marijuana.

The legislation included an estimate that sales tax on marijuana — set at 13 percent, with 9 percent going to the state and the remainder to localities that allow retail shops, including Cold Spring and Beacon — would raise as much as $436 million annually for schools, community grants and a drug treatment and public education fund in the state and $336 million for New York City. (Beacon will allow smoking lounges, although Cold Spring will not. Nelsonville and Philipstown will not allow either.)

Small farmers like Hudson River Hemp also hope the crop will preserve their livelihoods. While the farm grows hemp and also sells its own brand of CBD-infused products, including gummies, oils and dog treats, hemp prices have plummeted, said McGrath, who is the managing member.

“Our core values stem from wanting to preserve our farmland,” he said of growing marijuana. “Outside of that, we just saw a tremendous opportunity in the market.”

Hudson River Hemp felt like it was “part of history,” said Keenan, when in April it became one of the first 52 hemp farms awarded a license to grow recreational marijuana by the Cannabis Control Board, a five-member oversight body for the newly created state Office of Cannabis Management.

The control board will also approve licenses for retailers, smoking lounges and the processing operations that extract THC for products.

Whereas hemp by law can contain no more than 0.3 percent of tetrahydrocannabinol (THC), the psychoactive ingredient in marijuana that produces a “high,” the marijuana grown at Mystic Meadows will range from 15 to 25 percent, said McGrath. Even bigger than the differing THC amounts, Keenan and McGrath said, are the more-stringent rules governing marijuana and the expectations of consumers, farmers, retailers and the state.

“The regulations have changed, it’s a more-sought-after product, there’s a lot more at stake and at the same time there’s not even purchasers approved to buy it yet,” said McGrath. “So we kind of started on a hope and a prayer.” 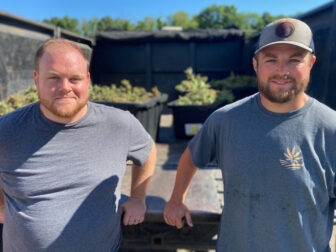 Each cultivation license allows farmers to grow marijuana on up to 1 acre or 25,000 square feet of greenhouse space. Another option allows growing both indoors (up to 30,000 square feet) and outdoors (20,000). The initial license expires in two years, when farmers in good standing can apply for another. Other rules govern how the plants are grown and shipped.

Hudson River Hemp had to decide which strains would thrive in the climate of a state without a history of marijuana cultivation, Keenan and McGrath explained as they stood in a field striped with rows of waist-high plants. Relying on the advice of two genetics companies, they decided to grow strains that are mostly indica-based instead of sativa, the other dominant group of cannabis plants.

The first plants harvested are known as “autoflowers” because they were grown from five strains bred to flower, or bud, in 70 to 90 days, independent of the amount of light they receive, said McGrath. The partners chose another 10 varieties for their long-term harvest. These plants, which require 13 or more hours of light daily, grow larger and have more THC, should be ready by mid-September to mid-October.

“It’s a test year,” said Keenan. “We’re going to see what the market wants, what does well. Next year, we’ll narrow it down.”

Harvested plants are dried at between 60 degrees and in 60-percent humidity for about two weeks. Then, the flowers are separated from the plant and cured, a process that involves placing them in airtight containers and occasionally allowing air in.

“The length of the cure depends on the final use, but actually allows a bit of moisture back into the flower and finishes it off,” said McGrath.

Chris Alexander, the executive director of the Office of Cannabis Management, said on Monday that OCM officials have been touring some of the farms now growing marijuana. “We have seen some outstanding product that’s about to come online,” he said.

The next step, giving the farmers and processors a place to sell their products, begins Thursday (Aug. 25), when firms that hope to operate dispensaries can begin submitting applications. The deadline is Sept. 26.

Just as the state began with hemp farmers for cultivation licenses, it is prioritizing people with marijuana convictions for retail licenses. The idea is to have legalization benefit communities, primarily Black and Latino, that justice advocates say were targeted for arrests.

Under regulations approved in July, the first conditional licenses to sell marijuana will go to residents who had a marijuana-related conviction before March 31, 2021 (or a parent, guardian, child, spouse or dependent of someone with a pot conviction before that date) and experience owning and operating a business. Certain nonprofits that serve former prisoners can also apply.

“This is a monumental step in establishing the most equitable, diverse and accessible cannabis industry in the nation,” said Alexander.

4 thoughts on “Ready for Harvest”