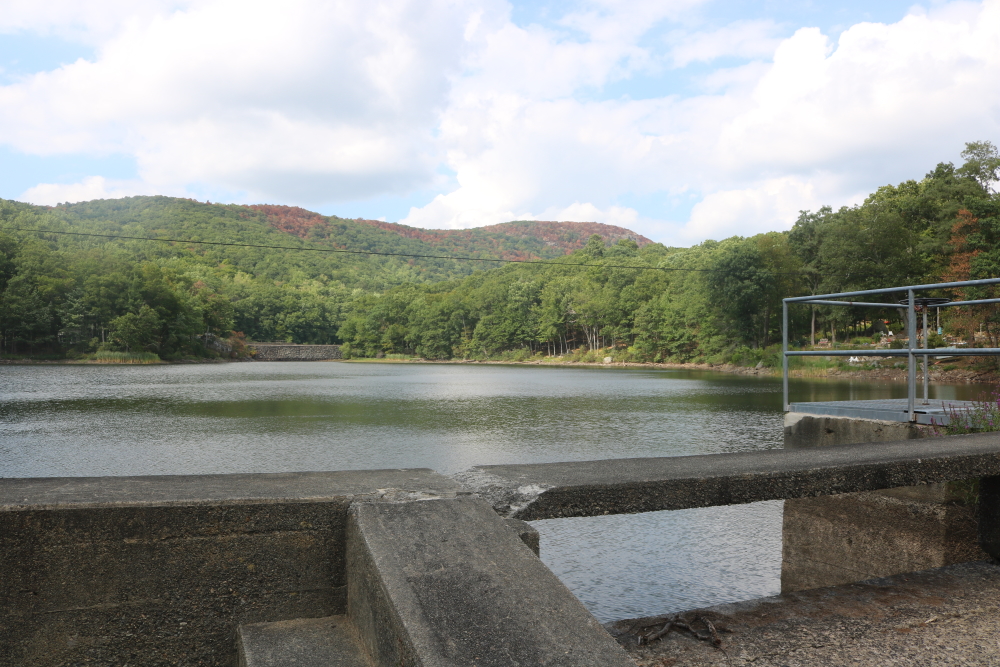 The Cold Spring reservoir on Sunday (Aug. 28); it has been at about half capacity. (Photo by M. Turton)

Matt Kroog, Cold Spring’s superintendent of water and sewer, reported that rainfall through the past week totaled just 0.01 inches. For the month of August, the village recorded 0.05 inches of precipitation.

The forecast on Thursday (Sept. 1) showed a chance of showers on only three of the next 10 days. The Federal Climate Protection Center, in an updated forecast for Beacon and Cold Spring released on Wednesday, said drought conditions will persist through September.

Mayor Kathleen Foley said at the Village Board meeting on Wednesday that at the end of June, village reservoirs were at nearly 100 percent capacity. Last week, Kroog estimated they had dropped to about 45 percent. A more detailed calculation this week increased that slightly to 52 percent.

“That’s better, but still a concern,” Foley said, adding that Kroog estimates the village has a 70- to 80-day supply at current usage levels.

Despite declaring an emergency on Aug. 25 requiring residents to reduce usage, Foley said the village is finding violators. She said that while the village is drawing minimal water from its impoundment areas to meet demand, it is violating the order itself because of leaks such as near the corner of Rock Street and Kemble Avenue that are being repaired “as quickly as we possibly can.”

“Contrary to popular belief, they are not all the same leak,” Foley said. “We have infrastructure that’s more than 100 years old; often, when one leak is repaired, pressure will shift,” and a new one appears.

The problem at Rock and Kemble, she said, is a faulty valve. Although the emergency order allowed the village to ease bid requirements, she said the earliest a repair could be scheduled was Tuesday (Sept. 6).

Cold Spring is also hoping to make a temporary connection to the Catskill aqueduct where it crosses through Nelsonville at Fishkill Road so it will have an emergency supply. (The village also wants to make a longer-term connection so it can make repairs to the reservoir dams.) Cold Spring would have to pay for any water drawn from the aqueduct, which supplies New York City.

“It is very, very expensive,” Foley said. “If we do have to switch to the aqueduct, it’s going to be even more important that we conserve water.”

A representative from the New York City Department of Environment Protection, which operates the aqueduct, will meet with the Village Board later this month.

Foley noted that, in addition to the water emergency, the village is under a fire emergency. “The fire company asks that there be no outdoor fires,” Foley said, urging residents to use extreme caution if grilling.

The mayor said discussions regarding the enforcement of restrictions are ongoing with Nelsonville, which gets its water from the Cold Spring system.

One thought on “Drought Shows Little Sign of Easing”