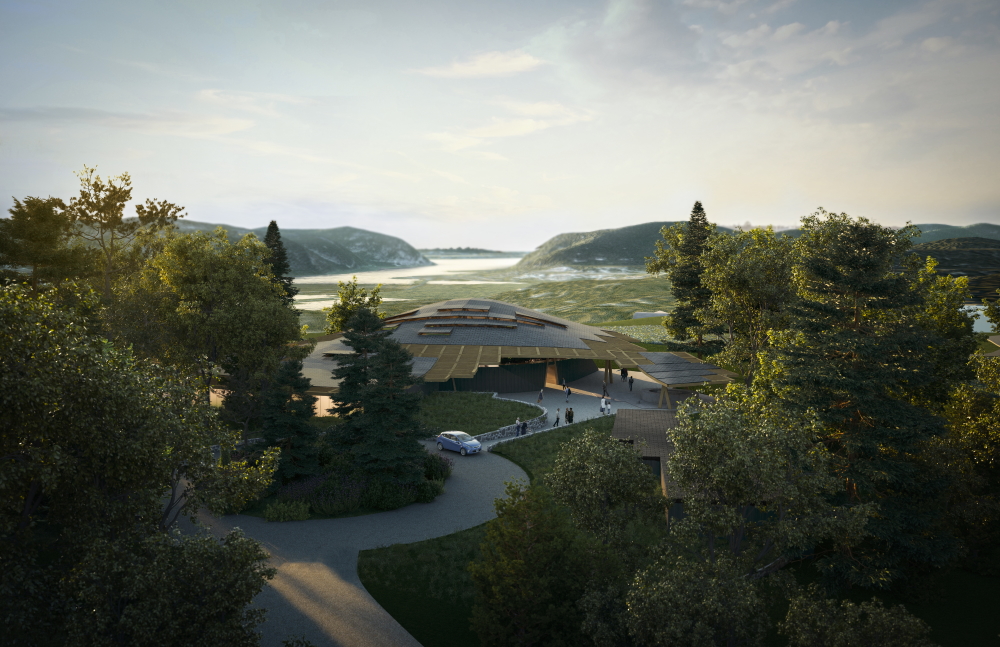 A concept drawing of the proposed HVSF outdoor theater, created by Studio Gang

The Hudson Valley Shakespeare Festival on Sept. 2 released conceptual drawings of the open-air theater it plans to build at the former site of The Garrison golf course.

It said in a news release that the images, created by Studio Gang, will be submitted to the Philipstown Planning Board as part of an ongoing environmental review process.

At its former home at Boscobel in Garrison, HVSF used a fabric tent that was installed and removed each summer. At the new site, it hopes to construct an outdoor theater “with a thin, ground-hugging profile” and “a floating timber-framed roof” with “shallow horizontal curves [that] echo the ridge lines,” it said.

The structure would be the first purpose-built theater in the country with platinum certification by Leadership in Energy and Environmental Design (LEED), the festival said. The plans include solar panels, rainwater capture, reduced embedded carbon and other elements. It would sit amid vegetative screening.

HVSF also said it has dropped plans to add an entrance and bridge on Snake Hill Road. It said the existing entrance was sufficient during performances over the summer. “The bridge would have been a major expense, and we are greatly relieved that it appears to be unnecessary,” said Davis McCallum, the HVSF artistic director, in a statement.

“Our audiences this summer loved our new home,” he added. “We operated without any of the impacts or problems that some had feared” and expressed during the Planning Board review.

The festival’s season continues through Sept. 18. The Planning Board next meets on Thursday (Sept. 15); it did not meet in August.