Like many Beacon Artist Union members, Linda Lauro-Lazin had given much thought to what she would show during her annual slot at the cooperative. 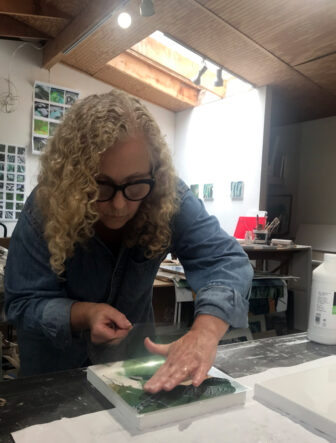 Lauro-Lazin at work in her studio (Photos provided)

She had more than enough work to choose from for her first solo show at the BAU Gallery but, out of the blue, felt compelled to start a series that became Terra Incognito, v. 2. “Each work is a hybrid of an impossible landscape and a disappearing natural world,” she explains.

As an expert in the field of digital art, as well as a professor of art and the assistant chair of the Department of Digital Arts at Pratt Institute in New York City, Lauro-Lazin is not blasé about making personal discoveries in her field. She’s been excited about “the new” since her days making the first of several transitions from painting to digital mark-making.

There are many other influences reflected in Lauro-Lazin’s work. Some, like scuba diving — she’s an aficionado, and has long been interested in marine biology — aren’t obvious. “It’s not anything specific to the ocean, it’s more about the experience of moving through water in a suspended way, kind of an immersive experience in the water, that affects my art-making,” she says. “For example, I have work based on glacier imagery, and the way I think about perspective is hovering above, floating below, moving through a landscape.”

At BAU, she’ll be showing works which, in her description, “don’t exist, although bits and pieces of them do. I am creating them digitally, then I print them — with the frescoes I am translating pigment into a fresco substrate. First, they’re liquidy; they set over four days. I then come back into them with paint, with my hand.

“The thing I’m excited about is I use a text-based, artificial-intelligence program. I key in the text to describe what the visuals should be and the AI generates an image. I’m teaching the AI what it’s about: These images are of melting glaciers. It’s both beautiful and mildly creepy. I’m always interested in sublimity. I’m making these into a fresco form, so the object itself is a fresco. The painting is a fresco but the image in the fresco is created with AI.

“I want to ask the questions: ‘What happens when we’re not here? How will this disappearing world be remembered?’ It’s where we are right now. The beauty of the pieces is seductive, but once people linger, maybe the work can get them to ask the questions.”

Raised in Manhattan, Lauro-Lazin became familiar with the Hudson Valley when she earned her BFA in painting at SUNY New Paltz. (She later earned an MFA in painting and drawing at Pratt.) She always felt supported by her parents in making art and, accordingly, spent a lot of time at the Arts Students’ League in Manhattan. She had other interests, as well, particularly marine biology and oceanography, which she still sees reflected in her work.

Describing herself as “first and foremost a painter,” Lauro-Lazin did that to her heart’s content after graduation during a six-month residency in Vence, France, home to the Matisse Chapel. “I would have been happy to have six minutes there,” she says.

“I fell in love with the colors of gouache, and also discovered these wonderful oil pastels, which are hard to find now. And, of course, I met artists from around the world, and to have the luxury of making art all the time, while in communication with other artists, was life-changing.”

The residency expanded Lauro-Lazin’s range and how she thought through her process. “I had these pieces of linen given to me by a dear New Paltz professor,” she recalls. “I used them almost like sutures. I gathered up branches from various places, which became signifiers of place and landscape. I wrapped them in linen, then painted them.

“They became little sort-of relief paintings with wrapped sticks and gouache and stood in for the place. It clarified for me that the way I conceive of landscape isn’t necessarily a representation of a specific place in a specific moment, it’s more experiential, a fabrication of an experience that makes reference to the landscape.

“This is how I see the world, and it doesn’t matter what material I’m using. This extends to my work now, the bulk of which is done from a satellite point of view, a floating-above perspective.” 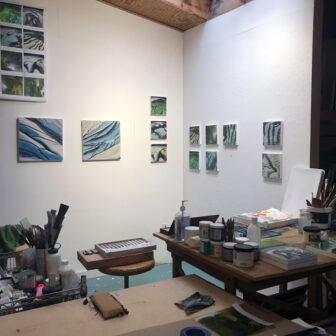 A corner of Lauro-Lazin’s studio, with work for her upcoming show on the walls

Lauro-Lazin was also interested in computer graphics (“It’s now called digital art,” she says) and, after returning to New York, enrolled at the New York Institute of Technology. “It was the place where the most interesting work was being done,” she recalls. “I was interested in part because you can explore with all kinds of sensory experiences. That allows for interdisciplinary work, which I found appealing.

“It was still early in its development, so I got to work with scientists. Doing senior-level graphics in a research facility was fascinating. It was like, ‘Here’s a thing we made. What can you do with it?’ The engineers and the scientists did their thing, and I did the art. At the time, I didn’t realize what I was doing was a part of programming. It just felt nice to be in the position where they were tinkering.”

The BAU Gallery, at 506 Main St. in Beacon, is open from noon to 6 p.m. on Saturdays and Sundays, or by appointment. See baugallery.org. Terra Incognito, v. 2 will continue through Oct. 2. Robyn Ellenbogen’s Emergent Patterns is featured in Gallery 2 and an interactive installation by Melissa Schlobohm, Glow Show, will be in the Beacon Room. A conversation with Lauro-Lazin and Ellenbogen is scheduled for Oct. 2.