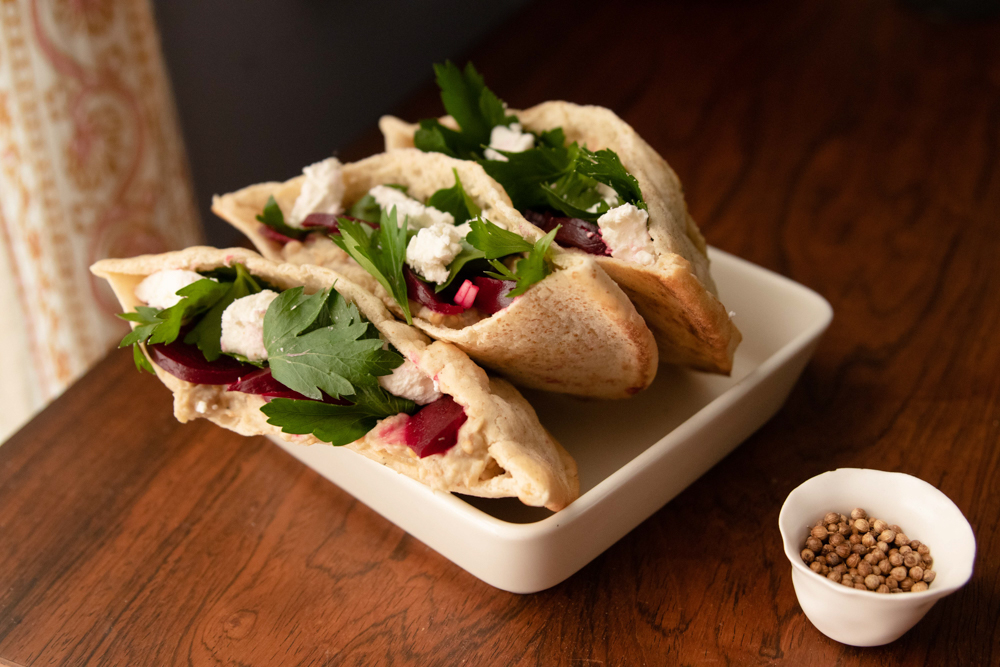 I have been thinking a lot about portable food lately. I’m just back from a four-day, college drop-off road trip to Ohio. As I drove home the other night, my supper consisted of a one-handed meal comprised of whatever I could scavenge from the car. I didn’t dare stop because I was trying to outrun a massive storm front blowing in from the West. (I failed.) Thus I dined on a quarter-bag of stale cheese puffs, a melted-iced half-caff and a couple of Oat Stovies I’d luckily bought at the farmers’ market before leaving as I barreled along I-80 between monstrous tractor-trailers.

Sooner or later, everyone comes across the story of the Earl of Sandwich, the legendary “inventor” of the sandwich who was so devoted to gambling he refused to leave his game table even at dinnertime. To him, it’s said, we owe credit for the idea of the portable, handheld, bread-enclosed meal. I’m sure I’m not the only person whose adult brain contains an indelible image of this mad-eyed zealot glued to his game table, greasy sandwich in one fist, cards in the other.

But as I traveled down the superhighway, increasingly dark thunderheads proliferating in my rearview mirror, I realized that his invention, excellent as it is, was not adequate to my problem. For one thing, every exciting sandwich I’ve eaten recently has been a mess. This includes the mainstay of my summer diet, a thick slice of tomato on a similarly thick slice of good bread smeared with mayonnaise, sprinkled with salt. There is no sandwich more perfect, and none less suited to driving, or gambling — unless by “gambling” you mean with your cleanliness and/or life.

Even the mainstream turkey-and-cheese sandwich that I’d composed in my son’s college dining hall the previous day was an affront to the idea of portability. I’d stacked it with abundant mixed greens, two slices of tomato, Dijon mustard, mayo, pepperoncini and pickles. It was delicious, and I was grateful that no one outside my family had to watch me eat it.

It’s common these days for pundits to bemoan the proliferation of things like car snacks and grab-and-go meals, as if they are transgression against eating. European children, they’ll point out, sit down to breakfast every morning and would never dream of skipping dinner for soccer practice. What’s more, cars designed for Japanese and European markets don’t have multiple cup- and burger-holders because the citizens of those civilized lands don’t multitask their way through every exploitable moment of the day.

While it’s surely true that sitting down to a meal in the company of family or friends is beneficial to our mental and physical health, is it the standard against which all other forms of caloric intake fall miserably short? Because if you think about the history of human dining, as I did while raindrops pelted my windshield, you surely realize that our species spent much of its evolution taking our calories wherever we found them — on the go, in the field or savannah, straight from the bush, plucked from the mud. Most animals, too, eat on the go, as they walk or hop or slither along.

As I licked the cheese dust from my fingers and lightning began banging down all around me, I wished I was home already. There lay shelter, plus all the ingredients for the best sandwich I’ve come up with all year — a delicious, messy creation I was more than ready to sit down to.

Heat oven to 425 degrees. Place the beets in a small roasting pan. Add a generous splash of water and a little olive oil. Cover the pan tightly with foil. Transfer to oven and roast until soft when pierced with the tip of a knife, 30 to 40 minutes. Be careful when checking; the steam released from the pan will be scalding.

Meanwhile, combine the remaining ingredients in a medium bowl. Stir well and set aside to marinate.

When beets are cool enough to handle, peel or rub away the skins. Slice into thin wedges and add to the bowl with the onion mixture. Toss, taste and correct for seasoning. Beets will keep several days, covered, in fridge.

For the Eggplant Salad

Tahini varieties vary in bitterness. Start with a little and add more to taste.

Eggplant tastes great when its flesh picks up the smoky essence from its charred skin. You can char it on the grill, on a gas burner or under the broiler. Prick the skin in several places with a fork and place it directly over or under the flame, turning it regularly with tongs until the skin is black and flaking and the flesh is very soft. (If the skin blackens before the flesh is cooked, finish in the oven with the beets, below.) When cool enough to handle, peel off the skin. Place the flesh in a colander and allow to drain 15 to 20 minutes. Discard liquid.

For a smooth salad: Place everything but the olive oil in a food processer and blend until creamy; add the oil and blend briefly. For a chunky salad: Chop the eggplant into small pieces, then mix everything in a bowl.

The recipe makes more than you’ll need for 4 sandwiches; the salad will keep up to 3 days, covered, in fridge, and can be used as a dip or spread.

For the Sandwiches  /  Makes 4

Warm the pita in a toaster oven or toaster, and open into “pockets.” Toss the parsley leaves in a small bowl with a little salt and just enough lemon juice to dampen. Spread the inside of each pita half with a quarter of the eggplant salad. Arrange the beets over the eggplant. Sprinkle with the goat cheese or feta, and top with a generous handful of the parsley mixture.