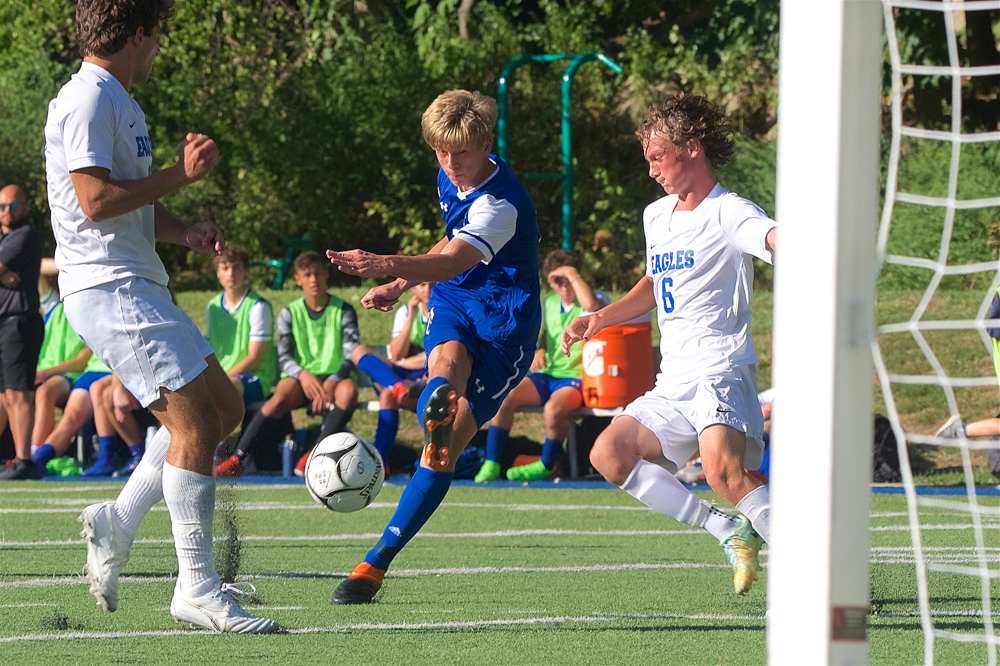 Haldane's Matt Silhavy puts the ball into the corner of the net in the win over Dobbs Ferry. (Photos by S. Pearlman)

Beacon is coming off its two best seasons in school history, winning a regional title in 2020 in its final season in Section I, then winning a  Section IX title last fall.

This year’s group knows the bar is set high, and Coach Craig Seaman, in his 23rd season, believes his squad is up to the task.

Last year’s team finished 17-2-1, beating Franklin Roosevelt in the Section IX, Class A championship before losing in the first round of regionals to eventual state champ Somers, 1-0. 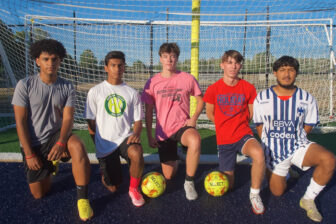 “Matt will be solid for us” at the net, Seaman said. “He’s got size, and he’s still developing, but the potential is there for him.

“In the back is where we’ll be strongest, because that’s where we return the most starters,” he said. “We’re going to have to figure out how we’re going to score goals, but that will come over time. Andre certainly has the potential to score, and so does Miguel. We’re hoping they emerge in that way.”

A return to the sectional title game will be a challenge, he said. “It’s asking a lot for them to repeat the success of the last two years,” Seaman said. “But I do think the potential is there. We played in summer league, and did fairly well.

“We lost some good players, and that’s experience we have to replace,” he added. “But there is some championship pedigree. And what we like is that we have a lot of guys who are interchangeable, and easy to coach. We have some depth issues, and we’ll see who emerges as leaders, as standouts.”

Beacon opens its season on Thursday (Sept. 8) at Arlington.

The Blue Devils got off to a slow start in their season opener on Wednesday (Aug. 31) hosting Dobbs Ferry but closed things out with a bang, shutting down the Eagles on their way to a dominant 4-0 win.

Junior Matt Nachamkin got Haldane rolling 15 minutes in by scoring off a pass from junior Clement Grossman. Sophomore Matthew Silhavy added to Haldane‘s lead five minutes later with an unassisted goal, beating the Dobbs keeper from the top of the box. 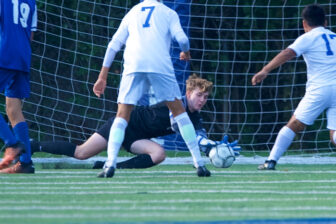 “We started out a little slow, but once we got going I thought we controlled play and moved the ball well,” said Coach Ahmed Dwidar. “Will Sniffen in the back was our quarterback, [sophomore] Brandt Robbins was our anchor in the middle and Grossman also had a nice start to the season. He was phenomenal.”

Dwidar likes the group he has returning from last year’s 9-8-1 team that ended its season with a 1-0 loss in the Section I, Class C title game to Alexander Hamilton.

“This group has the talent to get back to the final,” Dwidar said. “The most important thing for us is to stay healthy. Depth is always a question mark, but we have athletes ready to go. Our kids want to take care of unfinished business.”