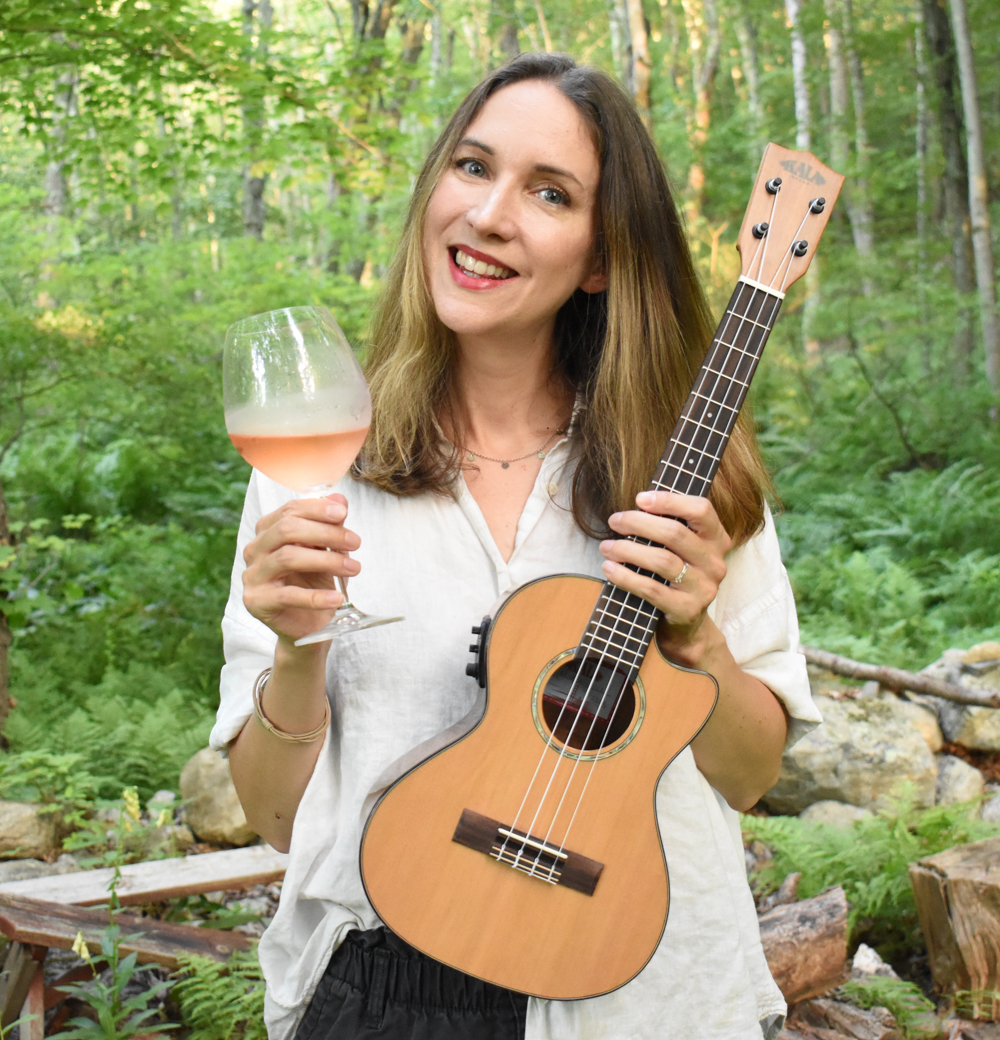 Somewhere in the YouTube universe, amid the sea of influencers and iPhone hacks, a woman sits on a cozy, pillow-strewn couch to welcome friends.

The woman, whose name is Kathryn Selman, is sitting in her home studio in woodsy Philipstown, and she is addressing visitors to her channel and website, Ukulele Wine Time (ukulelewinetime.com).

“You’re not only going to learn the basics of the ukulele — we’re going to learn lots of songs together — but you’re also going to become a more confident musician and you’re going to learn how to make the songs your own, in your own voice,” she says. “It’s all about connection, playing music with other people and finding that joy. We’re focusing on creativity, not perfection.

“As always, wine is optional, but if you want to sip and strum with me…”

Ukulele Wine Time exists because of a pandemic double pivot. Selman, who has a master’s degree in jazz vocal performance from the University of North Texas, and a decade of performing and teaching behind her, returned to school to study nutrition, had her second child (they’re now 1 and 3) and launched her channel as a “fun side project” that took off. “I am following where it goes,” she says.

The roots of all this date back to Selman’s childhood, in Texas, where she played piano and clarinet and sang in the choir.

It was while she was in college that Selman took up the ukulele. “I went to the music store and got a pretty good one, which I intended to use to accompany myself, using similar stringed instrument rhythms,” she says. “It’s a friendly instrument; you can learn a couple of chords and have an early win, even as a complete beginner.”

The dream was to perform, and she made the move to New York City as a singer-songwriter and an interpreter of Brazilian music, spending five years making the rounds. But she never got used to the instability.

“I had the hunger to go do it — still have it — but I also know I’m a homebody,” she says. “I liked performing but knew I wouldn’t want to tour constantly. I do want to perform again, but on my terms, not just to survive.”

She and her husband, Stephen, moved to Philipstown in 2018, after camping, hiking and kayaking trips. The couple met while teaching at a music school in Brooklyn, something he continues to do through his East Mountain Studio.

The first pivot occurred early in the pandemic, when Selman decided to pursue a career as a nutritional therapy practitioner. She launched with 10 clients; she now focuses on working with teen girls.

Meanwhile, winter and postpartum difficulties were making her anxious. She found herself “missing my creative self, yearning for it to return, wondering where it went,” she recalls. Selman decided to launch Ukulele Wine Time on the fly. “Jump in, then figure out the voice of it and the structure as you do: see what happens.”

What happened was a steady growth of fans. Initially, Selman filmed 10 videos. The numbers, while not in the stratosphere, have climbed slowly but surely ever since, with viewers from all over the world.

The YouTube videos are accessible to anyone, but with a paid membership you get access to a bimonthly Zoom meeting and chord and lyric charts for each song, so you can read as you learn. Members can also request and vote on upcoming song selections.

“I want to give them tools so they can make their own musical decisions; that there’s not a ‘right’ one,” she says. “I go over strumming pattern options which suit whatever level you’re at, and talk about things like how to end a song, counting it off. I always encourage everyone to play with and for other people.”

She selects songs that she likes but also keeps an eye on the current hits, such as by Harry Styles. Kala Brand Music, based in California, is a sponsor and provided Selman with one of its instruments.

As for the wine, it stemmed from watching other online ukulele tutorials and finding instructors “going so fast, assuming you knew so much. I thought sipping wine would add to the relaxed atmosphere, and slow the pace, making for a nice, comfortable and casual way to learn for adults.

“In my earlier videos, I would choose a bottle to drink and show it, but that got too expensive. I like to focus on wines that are organic or from a small family vineyard. Eliza Starbuck [from Flowercup Wines] has been great.” Nonalcoholic drinks are always suggested as alternatives.

When she first started the channel, Selman “had an idea that I’d be another persona, but the more I went into it, the more I just found I was being myself. The first video was filmed pre-kids and was sillier, with a super-positive vibe I now cringe at. I wanted it to be more professional. I’m a professional teacher; this is who I am.” (She plans soon to start up a group for children.)

The mainstay of it all has been the trusty ukulele. “It’s such a wonderful instrument — accessible, affordable, easy to start, and the ukulele community is seriously the most positive place you’ll find on the internet. I love that so many people are coming to play. One of my early supporters lives in Florida and comes to all our sessions. He has multiple sclerosis and he has found that playing the ukulele is therapeutic. It gives him strength.”