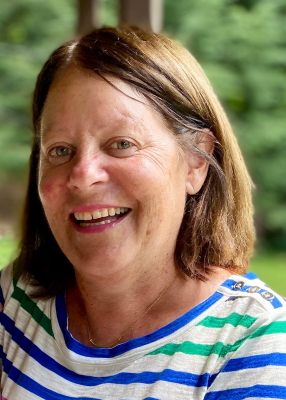 Sue was born in Wantagh, New York, on March 23, 1952, the daughter of George and Alice Harper. She grew up in Stewart Manor on Long Island, which led to a lifetime of love for the beach, card playing, bakeries and friendship, her family said.

She graduated from Maria Regina Diocesan High School in 1970 and Fairfield University in 1974. It was during high school that she met her future husband, Joe Fitzgerald, at a Saint Ann’s Sodality dance in Garden City.

For the next 56 years, Joe would struggle to keep up with an aggressive social calendar that would lead to wonderful memories, her family said. Together, they fumbled through high school, college and city living until they built a life in Garrison.

Initially Sue stayed home with the kids, orchestrated a playgroup, joined the PTA, led Cub Scouts and occasionally escaped for drinks with friends. Once her children were in school, she returned to her career as an insurance adjuster and retired as vice president and chief claims officer for AXA Insurance Co.

She enjoyed her work, but what consumed her later in life were her grandchildren, her family said. She shared with them her love for the beach, biking and swimming, and much laughter and fun was shared in Huletts Landing, New York, and Charlestown, Rhode Island.

Along with her husband, Sue is survived by her children, Brian Fitzgerald (Tara) and Jillian Bass (Ryan), and her grandchildren: Jack, James, Alice and Emma.

Friends may call on Friday (Sept. 8) from 5 to 8 p.m. at Clinton Funeral Home, 21 Parrott St., in Cold Spring. A Mass of Christian Burial will be celebrated at 10 a.m. on Saturday at St. Augustine Catholic Church, 381 Albany Post Road, in Ossining.

Zafiria Toscano, 85, died on Sept. 2 at her home with her daughter, Francesca, by her side.

Born Feb. 10, 1937, in Athens, Greece, she was the daughter of Dimitris and Theodora Spanoudis. She survived World War II and, shortly after that, the Greek civil war.

After graduating high school, Zafiria studied political science, but a scholarship took her to Switzerland to study business and hotel management. Upon graduation, she was hired by the 5-star King George in Athens as a floor manager. A year later, she was accepted a job as director of public relations and programs for a New York-based Greek cruise line on the TSS Olympia.

During her time on the Olympia, she met her future husband, Gaetano Toscano. The marriage took the couple to Canada and finally to Cold Spring, where they settled to raise a family.