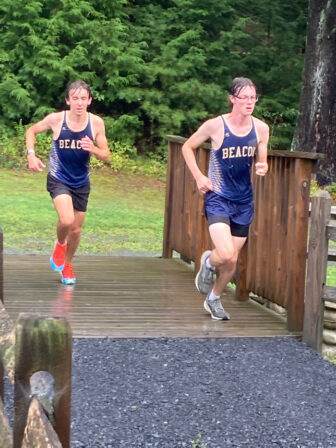 The Beacon boys won handily in a meet against Port Jervis and Fallsburg on Wednesday (Sept. 7) at Camp Huguenot, taking the top seven spots. The Bulldogs were led by Henry Reinke, with Jack Twining two seconds behind.

In the girls’ race, Ella Cason and Rachel Thorne took the top spots.

“We kept today’s meet very low-key, and just looked to complete our first race injury-free and successfully,” said Coach Jim Henry. “We accomplished both of those goals and discovered some areas for improvement.”

Beacon will travel to the Washingtonville Invite on Saturday (Sept. 10).

Haldane picked up a 3-0 win over Walter Panas on Sept. 2 in Cortlandt behind a hat-trick from Ryan Eng-Wong.

Coach Ahmed Dwidar said it was satisfying to defeat a well-coached, larger school. “Our defense — led by Will Sniffen, Matt Nachamkin, Ty Villella and Aidan — won this game for us,” he said.

Haldane (2-0) will visit Hastings today (Sept. 9) before traveling to Poughkeepsie on Monday. 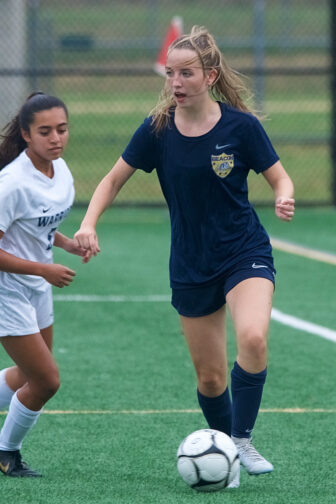 Beacon’s Rory LaDue looks for an opening against Lourdes. (Photo by S. Pearlman)

Getting off to a slow start against Lourdes turned out to be costly for Beacon on Wednesday (Sept. 7), as the Warriors dominated in the first half, leading 3-0 at the half on their way to a 5-1 victory at Beacon High School.

“We played better in the second half; we were more alive. It just took us some time to adjust,” said Coach Mike Lentini.

Reilly Landisi scored Beacon’s only goal, heading in a pass from Chelsea DerBoghossian in the 30th minute of the second half. Keeper Hope Cleveringa had eight saves.