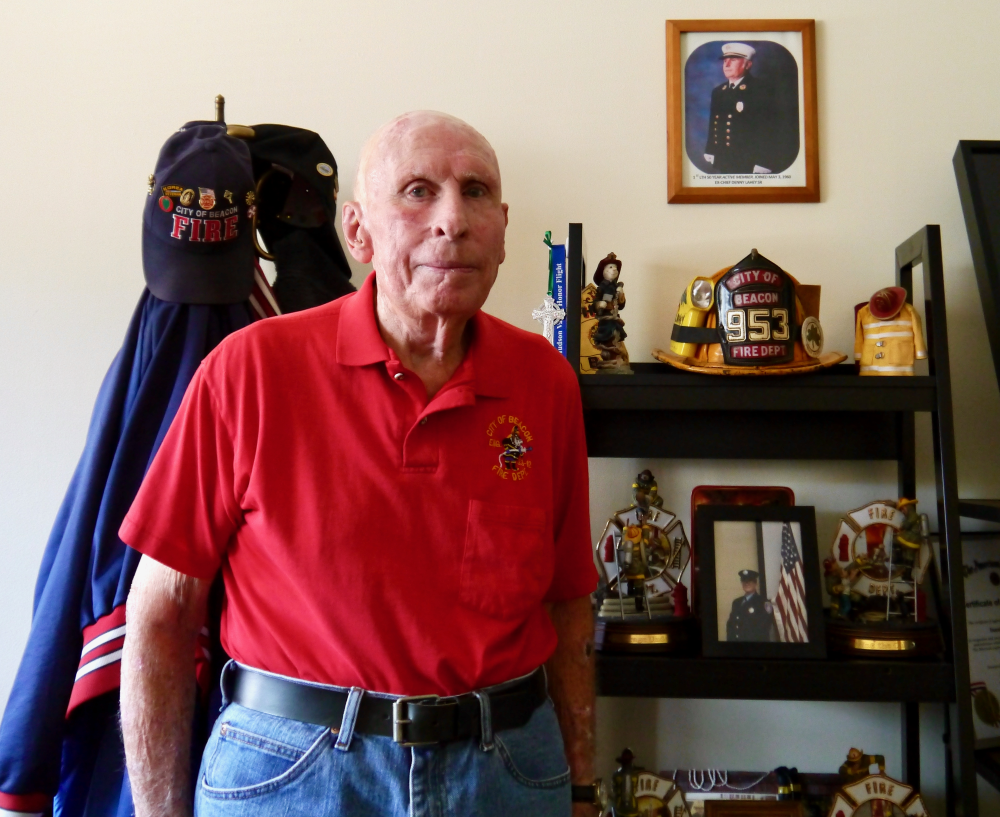 Dennis Lahey Sr., 89, has volunteered with the Beacon Fire Department for more than 62 years.

Why did you join the department?

My uncle was a member of the Lewis Tompkins Hose Co. Then a guy I worked with kept asking me to join. So I finally volunteered in April 1960. In 1961, I became a second lieutenant and, in 1962, I became a first lieutenant. The following year I became captain, and I served for eight years. From January 1970 to April ’71, I was the chief. Every two years they switched chiefs from the three stations. I was the first to become chief without being assistant chief. After I was chief, I became second assistant chief for two years, then first assistant chief for two years, then chief again for two years. I’m the only Fire Department member to have held every office.

Why have you continued to stay involved?

The Lahey family has always been involved in firefighting, going back to my grandfather and father in Wappingers Falls and my Uncle Joe here in Beacon. My son is the assistant chief, and he’s been chief officer for the last 30 years. My granddaughter became a volunteer at age 16 and served as a second and first lieutenant. After seven years, she became an EMS [emergency medical services] worker and, after that, she became a career firefighter — the only female in Beacon to become a career firefighter. I joined to protect the life and property of the people I serve. That was always my goal. I’m 89 years old, but I still go to calls. If there’s something I can do without injuring myself, I will help out. I go just in case anybody needs any advice. It’s in my blood.

Beacon will soon have a new chief. What advice would you offer?

With all the new buildings, there’s a lot of potential out there for a bad fire. Right now, the volunteer system is pretty shot in Beacon, and in the next three years it’s going to be completely career firefighters. We’re only running four career staff on a shift. That’s a dangerous situation if they come up on something serious. I recommended that they have at least six firefighters and an officer on every shift. The new chief is going to have to treat the career staff right, because those are the people who are putting their lives on the line every day. It’s not an easy job.

Will you be excited to see the new firehouse open?

When I was the chief back in 1975, I told the city that Tompkins Hose was deteriorating, and we should build a new station. We had a committee from 1975 to 1980 looking into the possibility, and in 1980 we got [the current] Tompkins Hose station. [The renovation project] will take a lot of history away from the Tompkins Hose Co., but you have to realize, the time for a central station is here. The city tried to get property to build one but they came to the conclusion that it was better to renovate Tompkins. A lot of the members feel disappointed, but you have to move with the times.

Why do you think there are fewer volunteers now?

People don’t have the time. There are a lot of requirements now, even to be a volunteer, and a lot of people don’t want to do that. My family — I had six generations in fire service, you know, but things are deteriorating, where the sons and grandsons aren’t following.