Beacon and Philipstown residents will pay 57 percent more for electricity this month and both Central Hudson and the agency that oversees New York’s grid warned that prices will likely remain high into the winter.

As of Tuesday (Sept. 13), local homeowners and renters are paying 13.06 cents per kilowatt-hour, up from 8.32 cents in August, and gas prices that took effect Sept. 1 rose by 12 percent, to 97.8 cents per hundred-cubic-feet.

The pandemic shutdown in 2020 led to a 4 percent reduction in electricity use and record-low prices. But the average wholesale price in New York for electricity more than tripled between January 2021 and January 2022. In February, Central Hudson announced a 33 percent increase in electricity and gas costs that it attributed partly to cold weather and rising wholesale gas prices. 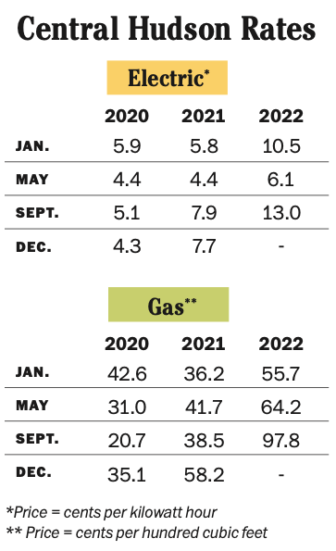 The electricity price increases will seem especially jarring to 25,000 households and businesses that had been benefiting from fixed rates as members of a collective purchasing agreement that included Beacon, Philipstown, Cold Spring and seven other municipalities. They had been paying 6.6 cents per kilowatt-hour for households and 7.1 cents for businesses until the supplier, Columbia Utilities, bailed in July during the second year of a three-year contract, sending customers back to Central Hudson.

The New York Independent System Operator (NYISO), which runs the state’s electric grid and facilitates the wholesale purchase of energy, said on Tuesday that it expects a “sharp rise” in costs as residences and businesses return to using power at pre-pandemic levels, natural gas gets more expensive and the state’s continues its legally mandated, long-term transition to renewable energy.

The Climate Leadership and Community Protection Act, enacted in July 2019 when electricity supplied by Central Hudson cost 5.5 cents and gas was at 30 cents, requires that carbon-free renewable sources such as solar and wind supply 70 percent of New York’s power by 2030. It also mandates that the state achieve zero-emissions electricity by 2040 and net-zero greenhouse gas emissions by 2050.

“Until there are enough clean energy resources on the grid to replace the reliability services provided by fossil-fueled generation, natural gas must continue to play an important role in meeting energy needs,” said NYISO.

In July, NYISO told the Climate Action Council, which was created to meet the renewable energy goals established by the 2019 law, that non-renewable sources of electricity, such as coal-fired plants and the Indian Point nuclear plant in Buchanan, are “retiring faster than new resources are entering the system.”

A company that monitors the energy market for NYISO said that prices in New York have “generally increased” because of the closure of Indian Point in April 2021. Last year, fossil fuels accounted for 89 percent of electricity production downstate, including in New York City and the Hudson Valley, compared to 77 percent in 2020.

Without adequate renewable sources, according to NYISO, the grid’s margin — the amount of excess generating capacity — is being reduced to “unprecedented levels” at a time when extreme weather is becoming a more powerful and frequent threat to plants, power lines and other components of the grid.

Because of that, the time is “fast approaching” when plants running on fossil fuels cannot be closed without a renewable source ready to replace them, said NYISO.

In the near term, Central Hudson is recommending that customers conserve by maintaining their cooling and heating systems, weatherproofing, turning down thermostats and avoiding space heaters, which use more energy.

“We understand the challenges our customers face with regard to the increased cost of electricity and natural gas and are working hard to keep costs as low as possible,” said Anthony Campagiorni, the company’s senior vice president of customer services and gas operations.