Here’s a curious fact: The word earworm was coined not by Spotifying millennials, but rather by turn-of-the-last-century Germans, who came up with the word öhrwurm some four decades after the advent of recorded music.

Since then, scientists have proposed several less-troubling phrases, including “involuntary musical imagery” and “stuck-tune syndrome,” but none has had the proverbial legs of the original.

Scientists have also speculated about the reason for earworms’ tenaciousness. Perhaps music tunnels into our brains so obstinately, they say, because long before humans invented writing 5,000 years ago, songs were the tools we used to convey and remember our most important information and stories. For more than 150,000 years before that, we relied on earworms to survive.

The idea of the earworm corresponds nicely with the idea of the mind as a garden, one of many gray-matter metaphors that scholars and writers have put forth. Others include an aviary (Plato), a filing cabinet (Dostoyevsky), a pitcher (Dickens) and a stream (William James). No one, as far as I can tell, has ever compared the mind to a kitchen or a larder — which may explain why no one has ever come up with a satisfying metaphor for food fixations.

I’ve been thinking about fixations, cravings and obsessions lately because for the past several weeks I have had both a song and a food craving stuck in my head. The former has completely worn out its welcome; I dread hearing on the radio the song that has been on endless repeat in my mind. The other, meanwhile, remains happily, eagerly anticipated.

The object of my gustatory infatuation is a dish I first cooked in July for an ailing friend. I sampled a few bites before packing it up and delivering it to their doorstep. Since then, I’ve been hankering for an opportunity to make it again. I even tried to convince my kids that they should request it as one of their going-away dinners before leaving for college, but they wanted old favorites instead.

It’s no surprise that the dish in question is inspired by the flavors of Korean bulgogi, or beef barbecue. The characteristic combination of savory, sweet, salty and spicy-hot seems custom-made to lodge in memory.

I expect I’ll be making this dish many times in the years to come. Will it wear out its welcome? Everything does, eventually. In the meantime, I’ll relish it however I can — in anticipation and memory, and right in front of me on my plate. 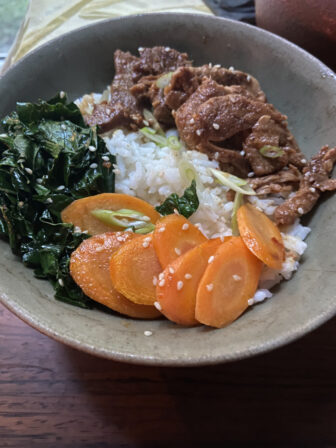 Note: Freeze the pork for about half an hour before beginning this recipe, until it is firm around the edges; this makes slicing it much easier. Meanwhile, start the rice and prep the vegetables and aromatics.

Combine the chili paste, brown sugar, ginger, garlic, ¼ cup soy sauce and 3 teaspoons sesame oil in a blender and blend until smooth, about 20 seconds. Transfer marinade to a medium bowl, reserving 2 tablespoons in a separate dish.

Remove the pork from the freezer (see note) and, using a very sharp knife, thinly slice crosswise. Transfer pork slices to marinade, toss well and set aside for 20 minutes.

Heat 1 tablespoon of the vegetable oil in a large skillet over medium-high heat. When oil is hot, add the pork in a single layer, working in batches so as not to crowd the pan. Season lightly with salt. Cook without turning or prodding until brown, about 1 minute. Flip pork and cook on other side until cooked through, about 1 minute more. Transfer to a plate. Add another 1 tablespoon vegetable oil to skillet and repeat with remaining pork. Wipe out skillet.

Return the skillet to medium-high heat. Add 1 tablespoon vegetable oil. When hot, add carrot slices, sprinkle lightly with salt and cook, undisturbed, until beginning to soften and brown underneath, 2 to 3 minutes. Push carrots to one side. Add kale, tossing to coat with oil. Cook, tossing occasionally, until crisp-tender, 3 to 4 minutes. Add reserved marinade, dividing it between carrots and kale, and toss to coat.

To serve, divide white rice among bowls. Arrange pork and vegetables on top. Sprinkle with sliced scallions and sesame seeds. Serve with dressing on the side.